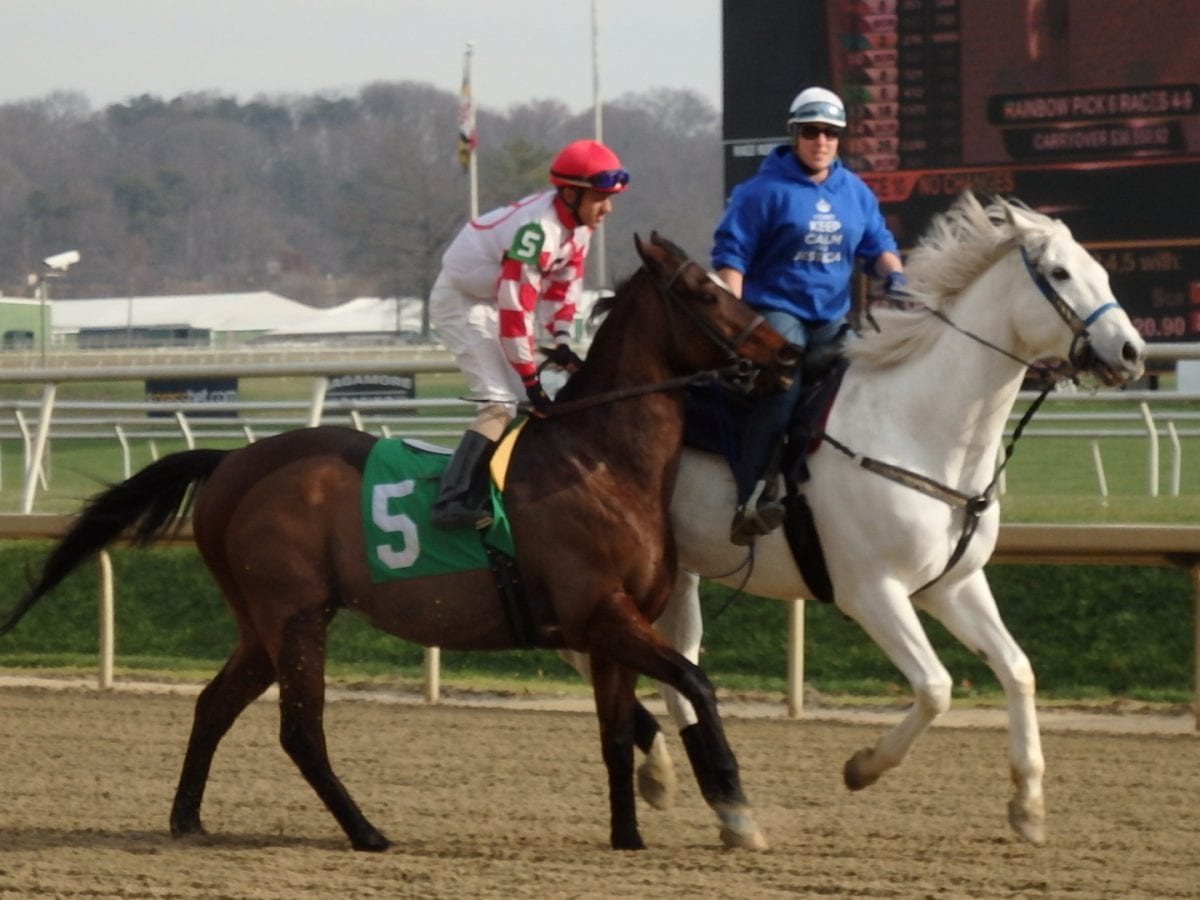 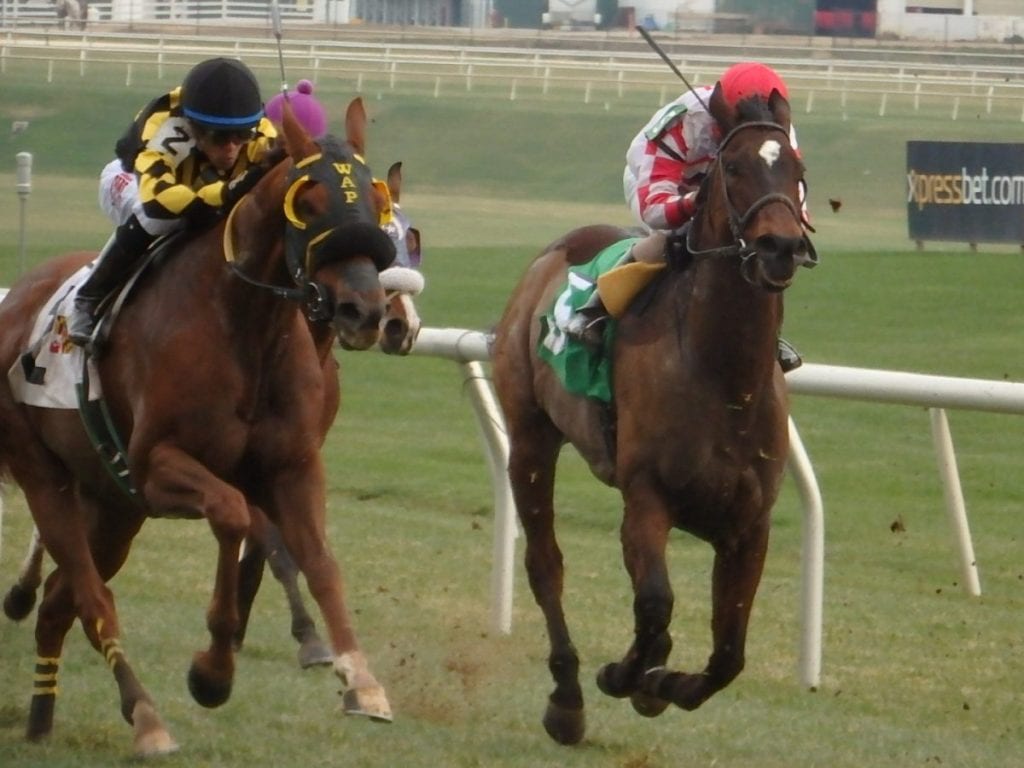 There was no last win photo, no winner’s circle ceremony, no cheering crowd to greet the old warhorse.  The horse whose owner called “so genuine” tried hard but simply wasn’t good enough.

The jockey hopped off, removed the tack, and watched as groom and gelding headed back towards the receiving barn.

And with that, the career of Skeleton Crew, 12 years old and all racehorse, was over. Next up, he’ll get a tryout as a part-time companion for another old-timer and a part-time pleasure horse at Patrick Smithwick’s Monkton, MD farm.

“It’s sad,” said George Carr, whose No Palla Stables owns the horse they call Skelly.  “But we’ve retired him probably six times already.  After every race we say, ‘Maybe this is it, we’ll see how he comes back.’  But as 12, he’s not going to come back again.”

Sad, yes, but not that sad.  Skeleton Crew retires sound, fit, and happy.  He’ll end up in a place where Carr and trainer J.B. Secor can visit often.  He’ll be taken care of.

What followed was a remarkable run that no one — well, almost no one — could have predicted: eight more years on the track, 18 more wins from 54 additional starts, and $300,000 in added purse earnings, bringing his career total to $476,815.

While Skelly slowed down in later years — the one-time stake winner ran as cheaply as $4,000 in 2015 — he never lost his competitive zeal.  In fact, Skeleton Crew won five of his last 16 starts and was in the money six other times.

At an age when very few Thoroughbreds continue to race — only 35 12-year-olds have made a start in 2015, according to Equibase, and only six horses older than that — Skeleton Crew notched two more wins.  No horse 12 or older has won more than twice this year.

Yet while few could have envisioned this career back in 2007, Secor said that he saw it all along.

Back in 1998, Secor, a recovering alcoholic sober since the 1980s, told the Baltimore Sun, “I still say to this day that D. Guilford helped give me the strength to stay straight.”

Which tells you something about the esteem in which Secor holds Skeleton Crew.

And to think: the claim that brought Skeleton Crew into Secor’s barn almost didn’t happen.

Trainer Scott Lake and owner Robert Cole had claimed the then-four-year-old for $40,000 in April 2007.  After six starts and two wins, they lost him, for $20,000, to That’s Amore Stable (which, full disclosure, was the author’s racing operation) and trainer Ferris Allen. 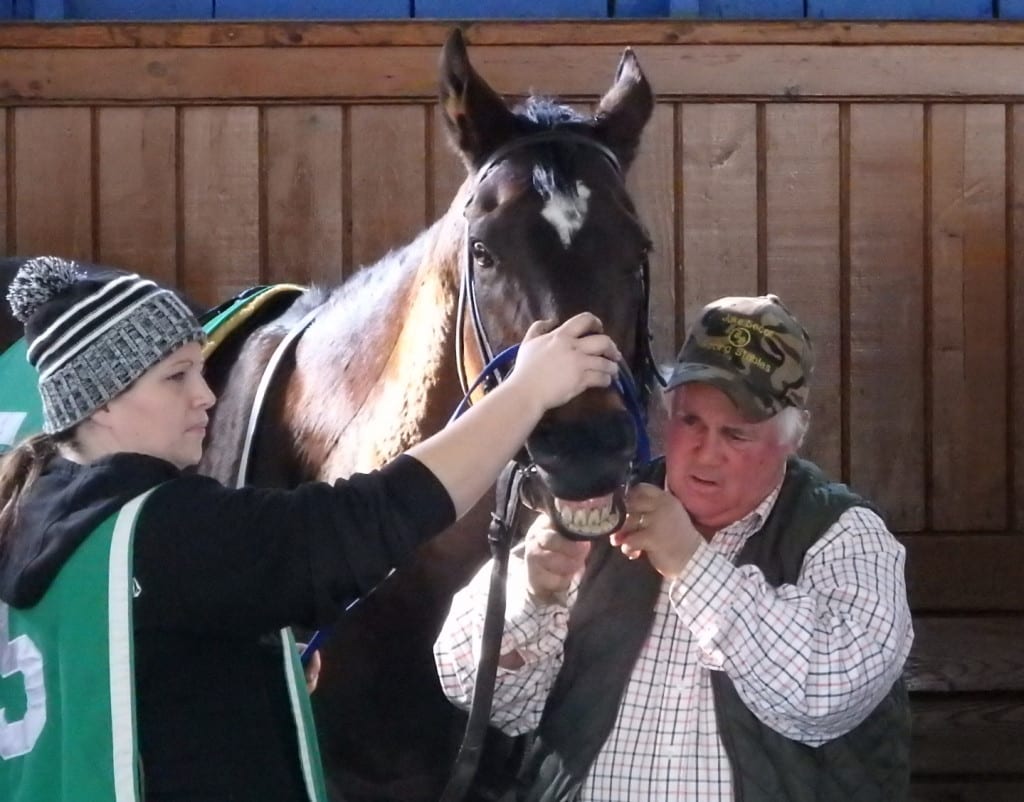 “I called Lake that morning,” Secor recalled.  “I said, ‘Scott,  you’re a good friend of mine.  I’ve got one more chance to roll the dice.  I’ve got to make it count.  Should I claim Skeleton Crew today?’

Secor added, “He was right.  You could roll a wheelbarrow between his legs, and I would never have claimed him if I’d seen that first.”

But drop the claim he did.  Skeleton Crew — who won at first asking at two, scored in the Hansel Stakes at Turfway Park at three, and was claimed three times in five months at four — had reached, though no one knew it at the time, his final destination.

After one more ’07 start, Secor put Skeleton Crew on the grass, a surface he’d tried only once before in his career.  That move paid immediate dividends: Skeleton Crew won at 12-1 odds and went on to win 13 times on the turf, earning more than half of his career total.

Each year looked about the same.  Secor raced Skeleton Crew off his Monkton farm, starting his season in the spring and running him until November or December, never more than nine starts in a calendar year and usually fewer.  Cesar Mambo galloped him each day.  Victor Figueras was his blacksmith throughout.

And each year, Carr and Secor would think perhaps Skeleton Crew had reached the end.

“We’ve been looking to retire him for a couple years, thinking this is going to be a last race,” said Carr.  “But he doesn’t want to stand around doing nothing.  He wants to train, so J.B. says, ‘I want to work some energy off him and see how he does.’  He just accelerates every time and thrives off of the training.”

Remarkably, through all that — through the gradual descent down the claiming ladder, through 18 starts under Secor in which he was the post-time favorite — no one ever claimed Skeleton Crew again.

There were some close calls, however.  Back in 2011, Skeleton Crew was beaten a half-length by Cardashi after a tough trip.  That runner ran second next out, beaten a neck in the Pennsylvania Governor’s Cup by superstar Ben’s Cat.

Carr called Secor and left a message on his old-school answering machine saying that he wanted to skip the horse’s proposed next start, in a $16,000 claimer, because he thought Crew would be claimed.  But Secor’s barn cats had other plans, knocking the phone off the desk — “a total J.B. story,” Secor calls it — and he never received the message.

At Penn National for the race that night, he overheard another trainer planning to drop a claim in on Skeleton Crew –but when that trainer saw the horse in person, she shook her head and walked away.

“Skeleton Crew went on the dirt that night in a hailstorm and won and didn’t get claimed,” Secor recalled.  “We were lucky.”

Carr, a resident of Deal, MD, pointed to a different night at Penn National as perhaps his favorite.

“I’m down at the winner’s circle, and it’s really far from there to finish line, and I knew there he was going to pass everybody and win,” he said.  “Everybody’s running down the fence towards the finish line to see if he would win, and I’m walking to the winner’s circle waiting for him to come back.  It had set up perfectly for him, it was going to be his night, and we’ve had many of those nights: you just know he‘s going to get there.”

With the retirement of Skeleton Crew, Carr’s No Palla Stables, which has been as big as seven horses — “and this horse bought them all,” interjected Secor — has no runners in training.  That won’t remain the case forever.

“He’s been the anchor for the stable,” said Carr.  “Every year you could count on him coming back, and we knew at some point that anchor would drop.  He’s sound.  He’s just been a joy to be around.