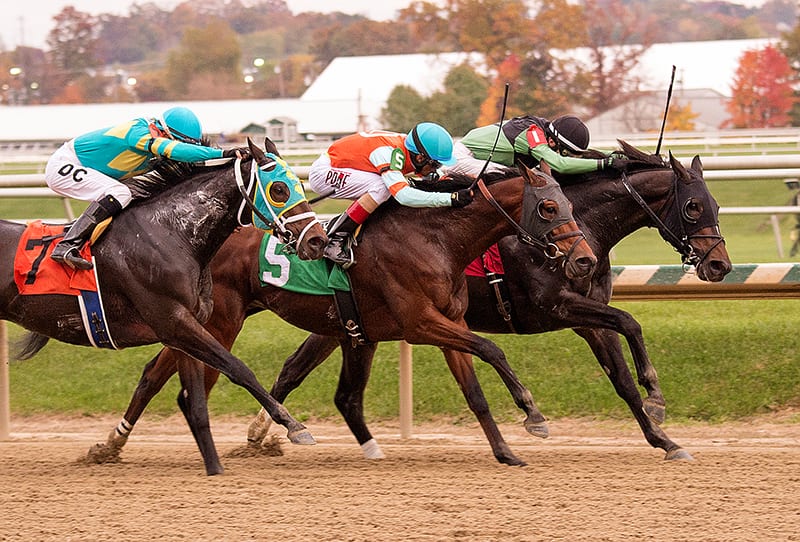 Headed at the eighth pole after setting a modest pace, Midwest Thoroughbreds’ Indycott re-rallied on the inside to emerge from a three-horse finish in front and win the $70,000 Jewel by a head on Claiming Crown Preview Day Sunday at Laurel Park.

The 1 1/8-mile Jewel was the eighth of nine preview races designed to mirror the 17th running of the $1.1 million Claiming Crown that kicks off the 2015-16 Championship Meet at Gulfstream Park on Opening Day Saturday, Dec. 5. All nine winners earned an automatic berth to the Claiming Crown and free shipping to Gulfstream.

Claimed for $50,000 out of a neck victory going nine furlongs Aug. 10 at Saratoga Race Course, Indycott was making his second start for New York-based trainer Danny Gargan and first since finishing third in the Temperance Hill Sept. 12 at Belmont Park.

“We’re very happy about this horse. He’s been training so good,” said Gargan’s assistant, Luis Matos. “We decided to bring him over here and the jockey did a good job. I want to say congratulations to everybody.”

Breaking from post 1 as the 8-5 favorite in the field of six, McCarthy relaxed Indycott, a 5-year-old A.P. Indy gelding, through a quarter-mile in 25.52 seconds, a half in 50.36 and six furlongs in 1:15.03 while tracked by 40-1 long shot Tru Greek, with Mr Palmer and Lieutenant Seany O in close pursuit.

Indycott was still in front after a mile in 1:39.18, as Mr Palmer and Lieutenant Seany O moved up to apply pressure. McCarthy called on Indycott at the eighth pole and he responded with enough to hold off Mr Palmer, with Lieutenant Seany O another neck back in third. Behemoth, Noteworthy Peach and Tru Greek completed the order of finish.

“It actually was awesome to have some pressure for him,” said McCarthy, following his second straight win on the card. “He can be a bit lazy and it really pushed him up and got him up to the wire on time.”

Indycott now has eight wins and $245,154 in purse earnings from 31 career starts.

John Rigattieri’s and Stephen Derany’s Twocubanbrothersu, a 1-5 favorite, survived a stewards inquiry and rider objection to earn his trip to Gulfstream with a 2 1/2-length victory in the Iron Horse.

A 5-year-old gelded son of Harlington, Twocubanbrothersu was claimed by Rigattieri for $6,250 in Tampa in May. The gelding has since won six of six of eight starts. Two of the gelding’s first two career starts in 2013 took place at Gulfstream.

In the Glass Slipper, a mile event for fillies and mares, Primo Via, confidently ridden by Eriluis Vaz, took the lead from Blisstikus inside the final sixteenth to earn a trip to Gulfstream with a three-quarter length victory.

Stephen Ferguson’s Maryland-bred Rockinn On Bye ended a string of narrow losses by sprinting down the center of the track to pass pacesetter Stolen Love in mid-stretch and pull clear to a 2 ¼-length victory in the Rapid Transit.

Beaten a nose in his previous start just nine days earlier, a Laurel optional claiming allowance at the Rapid Transit’s seven furlongs, Rockinn On Bye hit the wire in 1:23.48 for his sixth win in 28 lifetime starts.

Jockey Taylor Hole, aboard for the 10th straight race, kept 4-year-gelded son of Rock Hard Ten just off the flank of 6-5 favorite Classic Salsa, who chased Stolen Love through fractions of 23.32 and 46.57 seconds. Beach Hut came on late for second with Classic Salsa third.

In the Distaff Dash for fillies and mares, new to the Claiming Crown program, Estrada’s Girl and jockey Jevian Toledo dueled with Kingston Terrace and Chesapeake Spring for a half-mile before drawing off to win by 1 ¼ lengths after running 5 ½ furlongs on the turf in 1:02.42.

Claimed for $25,000 out of a runner-up finish July 5 at Presque Isle Downs, it was the third win in four starts for the Gerald Brooks trainee, owned by Ronald Clark. A pair of 45-1 long shots, See What Happens and Kaiser’s d’Light, ran second and third, respectively.

Racing three wide under jockey Nik Juarez, 18-1 long shot Proper Freud surged by Doddsprivatelabel in the final sixteenth of a mile for a one-length upset of the six-furlong Express. The 4-year-old son of Preakness (G1) and Belmont (G1) winner Afleet Alex covered the distance in 1:10.47 in his Laurel debut.

Owned and trained by Mark Gory, Proper Freud now has four wins and two seconds from nine starts this year, after going 1-for-9 in 2014. Multiple stakes winner and Grade 3-placed Galiana, the even-money favorite, was a distant ninth.

Sagamore Farm homebred De Marquee, making just her fourth lifetime start and first against winners, took the lead late and turned back a bid from 6-5 favorite Seeking Treasure to upset the Tiara at 11-1. Ridden by Inoel Beato for trainer Horacio DePaz, the sophomore Tiz Wonderful filly ran 1 1/16 miles in 1:41.62.

Unraced at 2, De Marquee debuted in a maiden claimer June 22 at Delaware Park before stepping up to maiden special weight company in July at Laurel. In her previous start, she came from well back to graduate by 5 ½ lengths Aug. 22 at Laurel. Seeking Treasure finished second, with pacesetting Tippie Tap third.

A return to his favorite surface meant a return to the winner’s circle for 5-year-old Holy Roman Emperor gelding Golden Emperor, who edged past Snowday in the last 50 yards to take the Canterbury for grass sprinters 3 and up. Winning time for 5 ½ furlongs was 1:01.74.

Trained by Mike Rogers, Golden Emperor now has five wins and a second from eight grass races, and eight wins in 21 lifetime starts for owners Car-Den Racing Stable. Rated in third by jockey Trevor McCarthy behind early front-runner This Ain’t No Bull, Golden Emperor ranged up to challenge Snowday at the eighth pole and steadily gained to hit the wire in front by three-quarters of a length.

Three Diamonds Farm’s favored Roman Approval overcame a troubled trip to run down Call First and hold off a late inside bid from Ghost Hunter to cap the afternoon with a thrilling victory in the Emerald.

Jockey Daniel Centeno rated Roman Approval on the inside but was forced to check as the field left the backstretch before swinging to the outside for the stretch run. Coming out of three straight graded stakes, placing in both the Stars N Stripes (G3) and Kentucky Turf Cup (G3), Roman Approval ran 1 1/16 miles on the turf in 1:41.03.

Created in 1999 to honor the blue-collar horses that are the foundation of the racing industry nationwide, the Claiming Crown historically has drawn entries from all parts of North America and from many of the country’s leading stables.