“The great ones create their own fate” 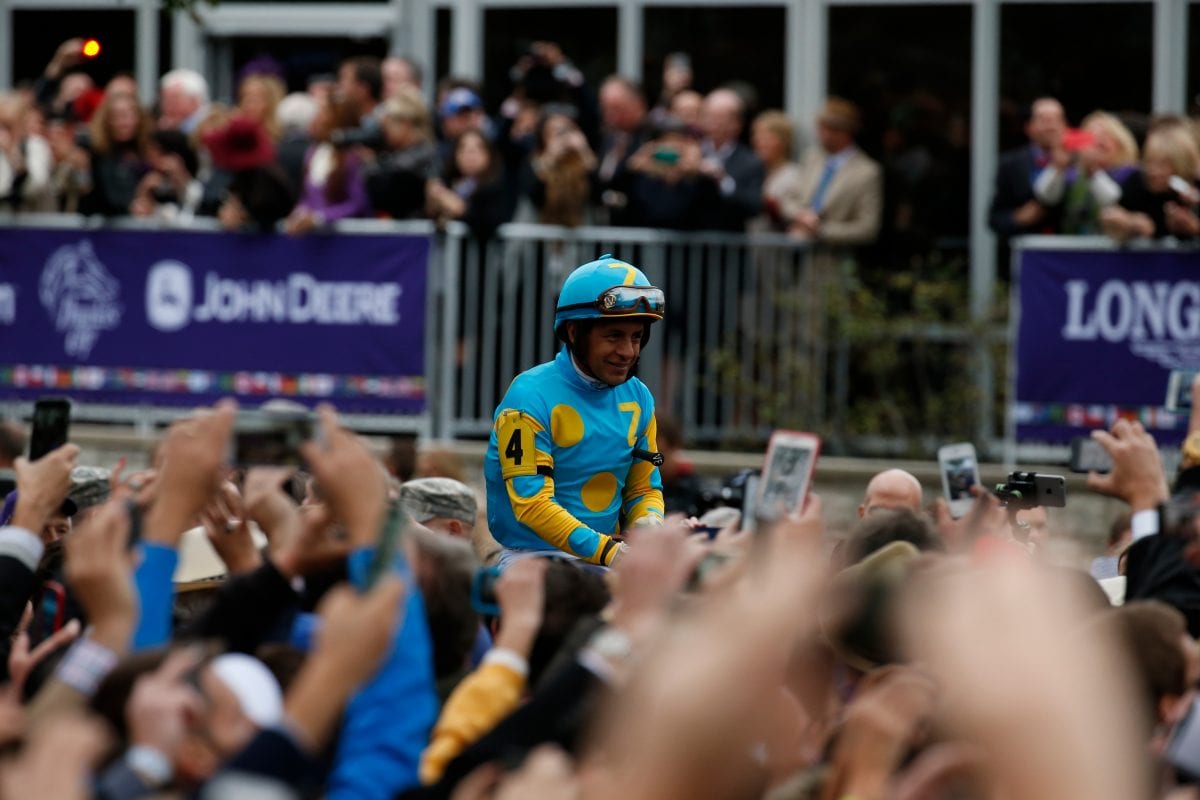 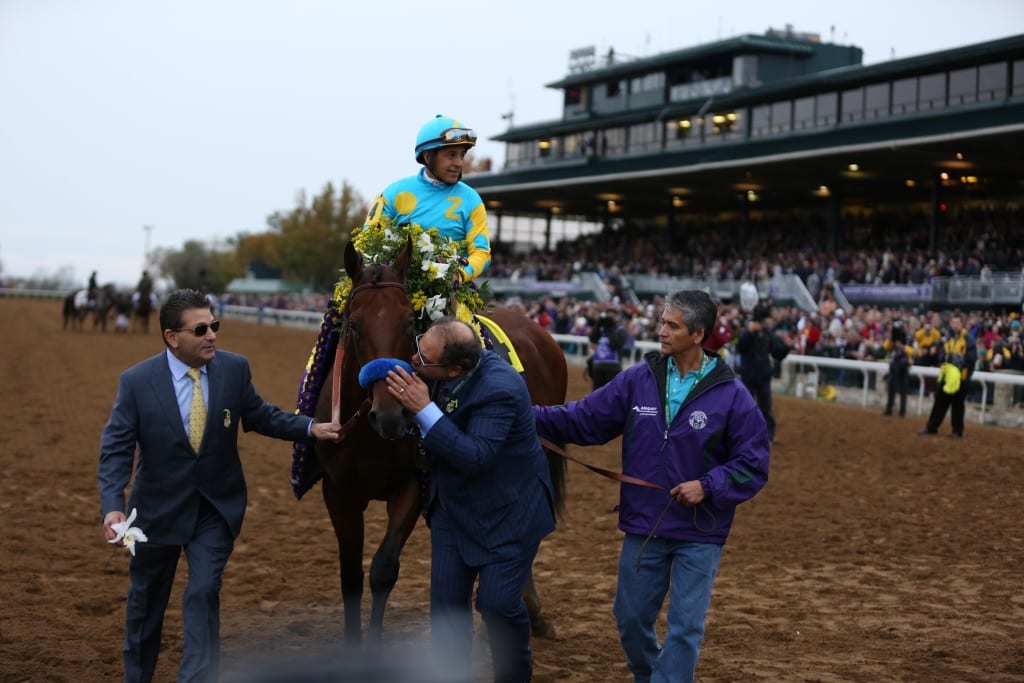 A kiss for the champ from owner Ahmed Zayat. Photo by © Breeders’ Cup/Tyger Williams 2015

When two horses scratched out of the  Grade 1, $5 million Breeders’ Cup Classic, it might have seemed that fate was going American Pharoah’s way.  But on Saturday evening at Keeneland, even fate would have had trouble keeping up with the Triple Crown winner.

That’s the way it works for great ones. They create their own fate.

The six-plus length win in the Classic turned contenders into “foeroahs,” victims of the desperation Pharoah creates in the most talented of fields. It’s not as it these displays haven’t occurred before. Racewatchers have become accustomed to moving their eyes back sharply back to the left when Pharoah crosses the wire to see who is running second, as if looking for the return of serve. I sense that other horses envy not only his talent but also his “horsonality,” the style and demeanor in the way he succeeds.

From the beginning of this “pharoahmenon” earlier this year, could there have been a trainer other than Bob Baffert to articulate who this great thoroughbred was becoming?  Baffert was comfortable in the limelight, practically warning the public, on what was approaching.  Baffert’s only uneasiness was that training Pharoah was too easy. He’s compared Pharoah to a pet, as if pets were so manageable. So confident was Baffert about how capable Pharoah was that prior to Classic, he jokingly said he was considering running him later this month in the Clark Handicap at Churchill Downs.

I’ve been a Pharoahite since mid-March, when I put him atop in the voting of my first NTRA three-year old poll of the year. After the Kentucky Derby win, I knew he was great. He had to be in order to stand out this year. Who would have expected that in the best three-year crop of perhaps a generation there would be the horse of a lifetime?

Pharoah looked me in the eye the first time I saw him in person at Pimlico as I was watching the Baffert duo of the Derby winner and massive Dortmund. The duo was being circled as final preparations were being made to the course after the mid-morning break. When he saw me I got the feeling that he was looking at me as as if to say, “Hey, there’s the new guy,” picking me out of a lineup of reporters and knowing that I hadn’t been there the day before.

That’s the kind of consciousness the horse must have. I’ve heard trainers say that the first thing they want in a thoroughbred is “brainspace”- a lot of width between the eyes so to speak. American Pharoah is smart enough to do owner Ahmed Zayat’s taxes, but that would have been a waste of his talent. 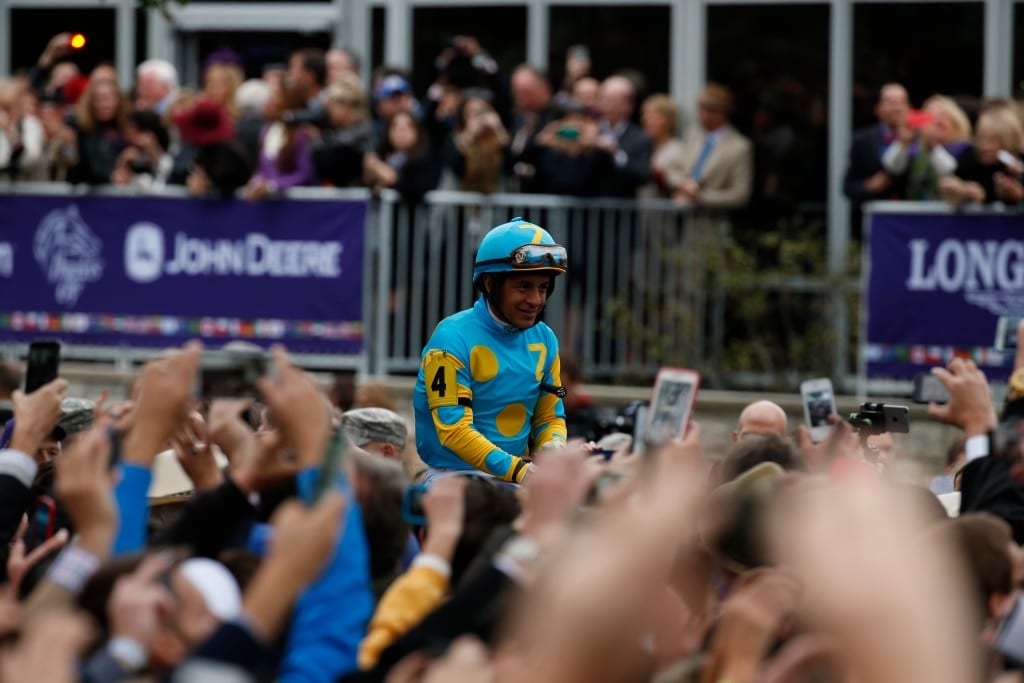 Gather round, fans and racegoers, for the tale of American Pharoah. Photo by © Breeders’ Cup/Todd Buchanan 2015

His coronation in the Belmont Stakes eased the Triple Crown pain of so many race goers, many of whom saw failure time after time — seven times for me — in sometimes bizarre and quirky outcomes. The feat also sparked interest, even enthusiasm, to those who knew little about racing prior.

In the Haskell Invitational, in his first post-Crown start, Pharoah made winning look so routine, his dominance could nearly be trademarked.

For good measure — and like other greats before him — the Triple Crown champ even lost at Saratoga, the “Graveyard of Champions,” in the Travers Stakes.  That put him in such august company as Secretariat, defeated at the Spa by Onion, and Man o’ War, Saratoga loser to the astonishingly well named Upset.

While it was Keen Ice who won the Travers, it might have been Frosted who put the chill on Pharoah that day, shadowing him in tight quarters around the rail. In the press conference after the Breeders’ Cup, Zayat, jockey Victor Espinoza, and Baffert took turns in owning the blame for the Saratoga setback. Zayat stated that the public workout the morning prior to the mid-summer Derby in front of some 15,000 fans might have resembled too much of an actual race.

That was fitting.  Perhaps the only thing that could catch Pharoah was his own success. The setback added suspense, uncertainty and intrigue to the Classic.

Then the race happened.

Espinoza blitzed American Pharoah out of the gate, took the lead early, and turned back every charge with authority. This was very familiar. While the second place finisher, longshot Effinex, running the best race of his career, hustled around the course, Espinoza cruised stopping the clock in two minutes even.

“He’s got nothing left to prove,” said Baffert, emotional in the post race press conference.

In fact, there were enough tears at the post race press conference that you would have thought he lost before realizing the trio was only fully recognizing, and acknowledging their gratitude, to a horse the likes of which none of them will be around again.

“To me, racing’s got this big horse. We can’t be afraid to run these horses,” added Baffert about the phenom that he called “Hickory.”

I met so many fans over Breeder’s Cup weekend that even in Kentucky were visiting the racetrack for the first time, some on Saturday afternoon, many on Friday morning, when he took his last gallop. He’s leaving the racetrack with fans, new and old alike, wanting more, exuding a presence that we may not fully catch even after his racing days are gone.