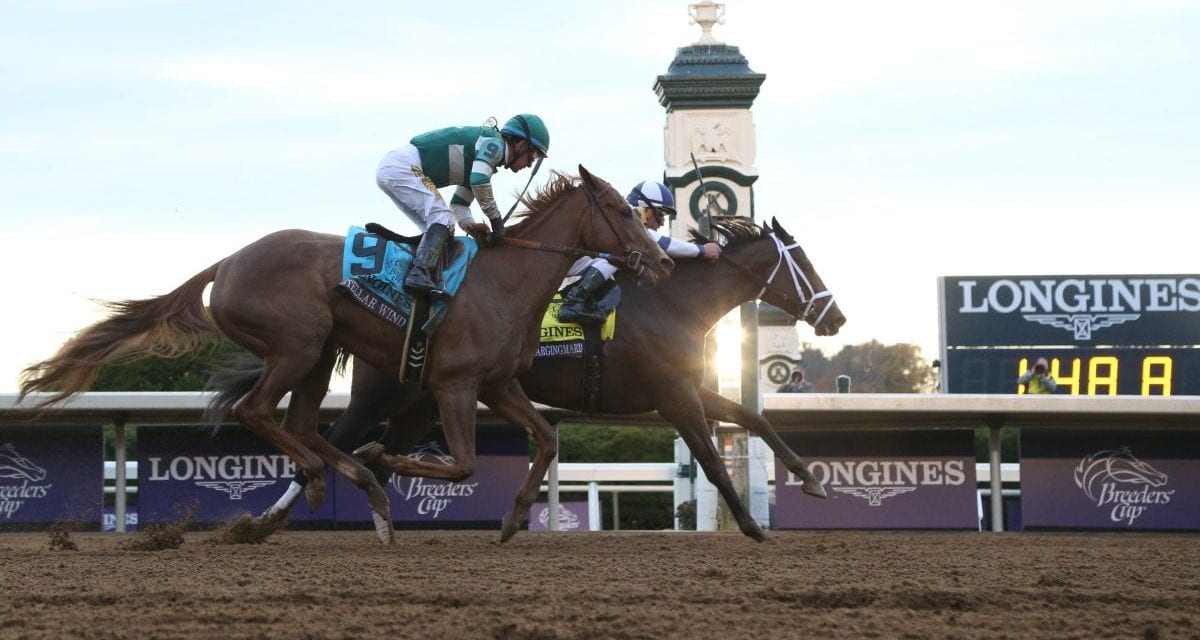 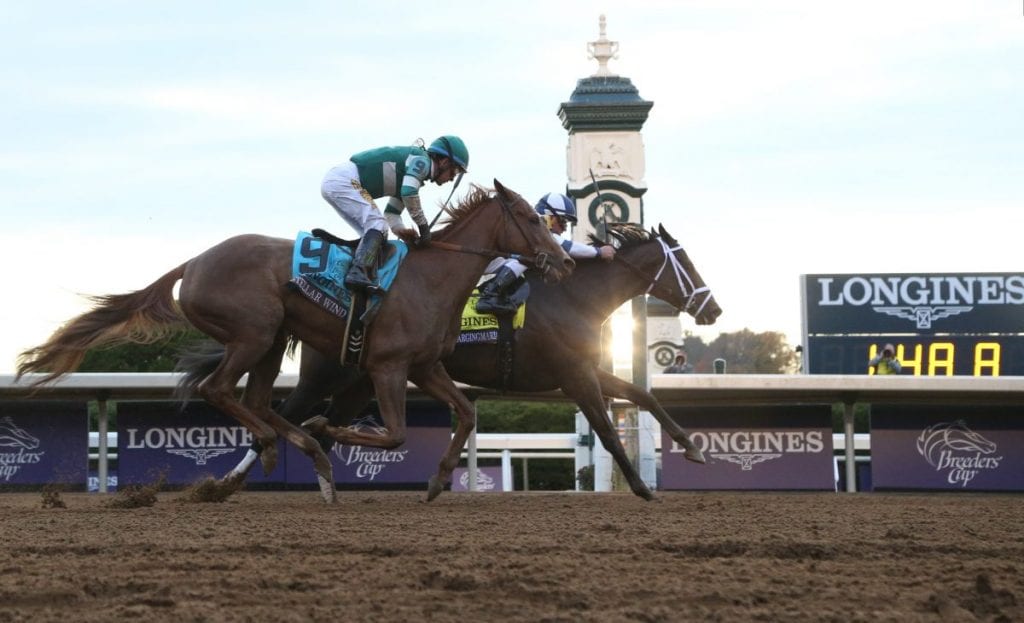 A Stellar Wind blew through Keeneland yesterday — and nearly made off with the largest share of the $2 million Distaff bounty.

The Virginia-bred daughter of Curlin was more than gallant in defeat, falling a half-length, and a denied objection, short of Breeders’ Cup glory.  In the end, she was foiled by another horse with a mid-Atlantic connection, albeit a more tenuous one.

“I am thrilled with our filly,” said John Sadler, Stellar Wind’s trainer.  “She ran a great race and she showed herself to be the top 3-year-old filly in the country. I think she is deserving of an Eclipse Award. She really ran an outstanding race.”

Stopchargingmaria, the Todd Pletcher trainee, got first run on the leaders, made the lead in the lane, and held Stellar Wind at bay (while floating that one out to the center of the course) to earn the biggest payday of her career.  Her Midlantic connection?  She’s twice visited Pimlico, earning graded stakes laurels both times; she won the 2014 edition of the Grade 2 Black-Eyed Susan at Old Hilltop and then returned earlier this year to secure the Grade 3 Allaire DuPont Distaff title.

“You’re concerned anytime there is an inquiry or an objection, but I felt pretty comfortable watching the head-on that we were going to be OK,” Pletcher commented.

Those two capped — and highlighted — a busy Breeders’ Cup Friday for a bevy of Midlantic-connected runners.

The Distaff was a sort of Ground Zero for those with connections to the region, and why not? Two of the nation’s key distaff races — the Grade 1 Cotillion, for three-year-old fillies at Parx Racing, and the Grade 1 Delaware Handicap for fillies and mares at Delaware Park — take place here.

The top two finishers from the latter ran 4-5 in the Distaff, Del ‘Cap winner Sheer Drama a neck in front of Frivolous while 4 3/4 lengths behind the winner.  Meanwhile, the top three finishers from the former — I’m a Chatterbox, Calamity Kate, and Peace and War — ran 8-9-12 in the Distaff.  Got Lucky, a Todd Pletcher trainee who won two Monmouth Park stakes over the summer, finished tenth.

Three runners who banged heads against each other at Monmouth Park in the summer hooked up once again in the $1,000,000 Breeders’ Cup Dirt Mile, but while a couple of them ran well, none was any match for ultra-impressive winner Liam’s Map, who overcame a difficult trip to win going away.

The top finisher of the trio, Red Vine, winner of Monmouth’s Majestic Light, ran well to be third, though nearly six behind the winner.  “My horse ran a great race, a great race,” said trainer Christophe Clement.  “But the first two finishers ran a better race.”

Virginia-bred Valid, with 22-year-old Nik Juarez in the irons, made a bold move before emptying out late and finishing fifth, a neck out of fourth.  Valid won the Grade 3 Iselin at Monmouth Park after running second or third at that track three other times.  Bradester, who took two graded events at Monmouth this year, finished ninth.

A pair of juvenile fillies with regional links were slated to tackle the $1 million Breeders’ Cup Juvenile Fillies Turf, but the scratch of Tin Type Gal left West Virginia-bred Ruby Notion, a daughter of Great Notion, the lone banner-carrier.  As expected, Ruby Notion zipped to the early lead and controlled the pace through moderate fractions.  She maintained the edge to the quarter pole, finally ceding command at the 3/16ths marker, but faded steadily from there, finishing 13th of 14.  Catch a Glimpse, who stalked Ruby Notion through the early running, earned the victory.