Onus aims to step up to stakes company 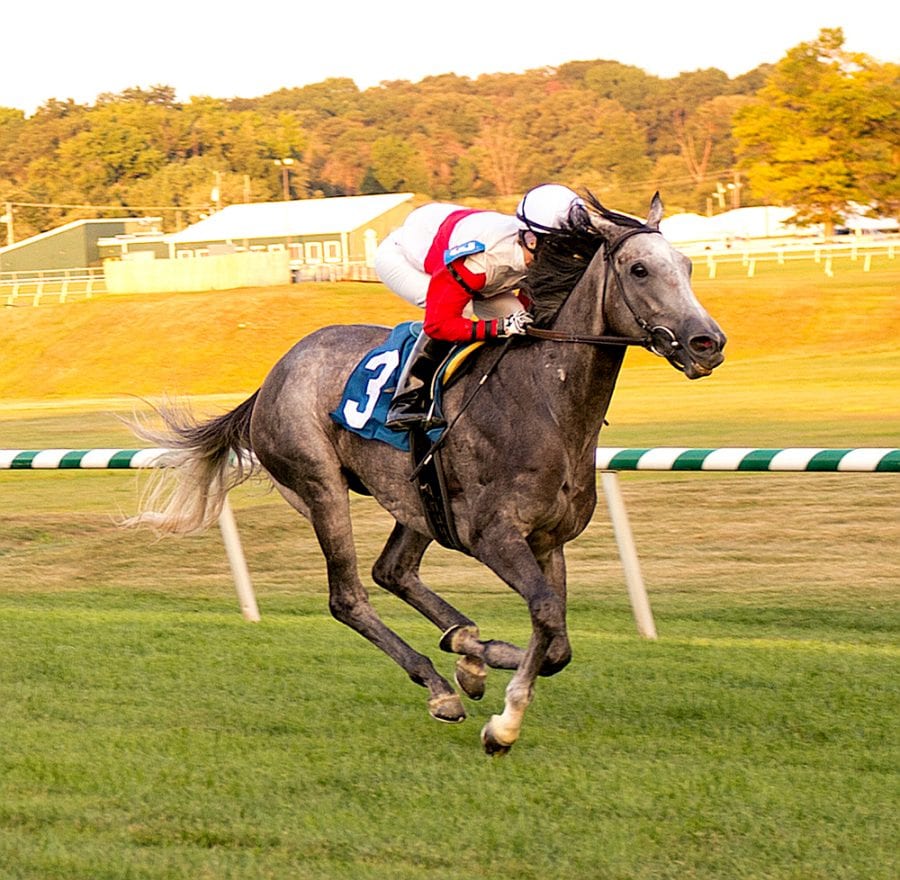 Onus looks to make her first stakes start a winning one in the G3 Commonwealth Oaks Saturday at Laurel Park.

Hall of Fame trainer Shug McGaughey will try to build on recent successes at Laurel Park Saturday when he will be represented by Stuart Janney III’s Onus in the $150,000 Commonwealth Oaks (G3).

McGaughey, who took down the $250,000 Commonwealth Cup (G2) with Mr Speaker last weekend, will send Onus from Fair Hill Training Center in Northeast Maryland Saturday morning with confidence that the daughter of Blame will handle the Laurel turf course.

Onus won her two most recent starts in convincing fashion, skipping over the grass at Laurel while winning by eight and 10 ½ lengths, respectively. She is scheduled to make her stakes debut Saturday.

“It’s a big step forward. There’s a big difference going from an allowance race to graded stakes,” McGaughey said. “But I’m looking forward to running her.”

Onus is slated to face 11 other 3-year-old fillies in the 1 1/8-mile turf event presented by the Virginia Equine Alliance at Laurel Park. The Oaks will highlight an 11-race program that will also offer five stakes races for horses bred in Virginia or sired by Virginia stallions.

Onus, who finished fourth in two starts on dirt last year, made her 2015 and turf debut at Keeneland April 12 in a maiden special weight event that produced four next-out winners, including the top three finishers. The McGaughey trainee finished seventh after stalking the pace on the outside, but she returned to break her maiden with a dominating performance at Laurel July 11. She came back with an even more impressive performance at Laurel on Aug. 14, winning by 10 ½ lengths under a hand ride.

“She came to us as a 2-year-old and we thought she was really nice. We gave her time to develop,” McGaughey said. “Ever since she ran [at Laurel] we’ve been pointing her to run [in the Oaks]. She trains at Fair Hill and she likes the grass [at Laurel].

Forest Boyce, who has been aboard the gray filly for her two local victories, has the return mount.

Cheyenne Stable LLC’s Stormy Regatta will hold a significant edge in stakes experience over Onus Saturday, having run in stakes in her last three starts. The Christophe Clement-trained filly finished third in the Wild Applause at Belmont June 14 before notching back-to-back stakes wins by a nose in both the Little Silver at Monmouth July 26 and the Riskaverse at Saratoga Aug. 27.

“She’s obviously a nice filly, but she’s not a graded-stakes winner,” said Clement’s assistant, Christophe Lorieul. “So, they wanted to run her (in the Oaks) after those two stakes wins.”

Stormy Regatta was purchased privately after winning a $50,000 maiden claiming event at Gulfstream Park April 3 and came right back to win an optional claiming allowance at Gulfstream two weeks later.

Trevor McCarthy has the mount aboard the daughter of Midshipman.

Gregory Bentley’s Lola Beaux, who finished just a neck behind Stormy Regatta while finishing third in the Riskaverse, was entered in the Oaks by trainer Edward Graham. The European import has never been worse than third in six starts, including a second-place finish in a Group 3 stakes at The Curragh last year. The daughter of Equiano won her U.S. debut at Penn National in July before finishing second at Laurel Aug. 7 in an optional claiming allowance, in which she surged late to lose by a nose.

“She’s still learning. She was a little green when she ran at Laurel,” said Graham, whose trainee went on to finish third in the Riskaverse. “To me, she’s getting better every race.”

Martin Schwartz’s Zvarkhova also campaigned in Europe before making a victorious U.S. debut for trainer Chad Brown. The French-bred filly, who was stakes-placed twice in France last year, closed from off the pace to post a 1 ¾-length triumph over next-out winner Gap Year at Saratoga Aug. 7

Trainer Graham Motion entered three fillies for the Oaks: Three Chimney Farm’s Rainha Da Bateria, Todegica and Catcha Rising Star. Rainha Da Bateria, winless in three starts this year, will bid to return to the form she demonstrated during her juvenile campaign, during which she captured the Jessamine (G3) at Keeneland and finished a close second in the Jimmy Durante (G3) at Del Mar. Hesmonds Stud Ltd.’s Todegica has finished second in two starts at Delaware Park since being imported from Europe. Albert Frassetto’s Catcha Rising Star finished off the board in the Monmouth Oaks (G3) last time out.

James Hibbart’s Gypsy Judy, who defeated Lola Beaux at Laurel before finishing off the board in the Boiling Springs (G3) at Monmouth; Goodwood Racing V’s Red Sashay, a multiple-stakes winner at Gulfstream Park; Brereton Jones’ Heart of Midway, a maiden winner at Monmouth in her fourth start before winning a Delaware Park allowance by three lengths; and Kathleen Willier’s Miss Bullistic, who captured the 2014 Selima over the Laurel turf course; round out the Oaks field.