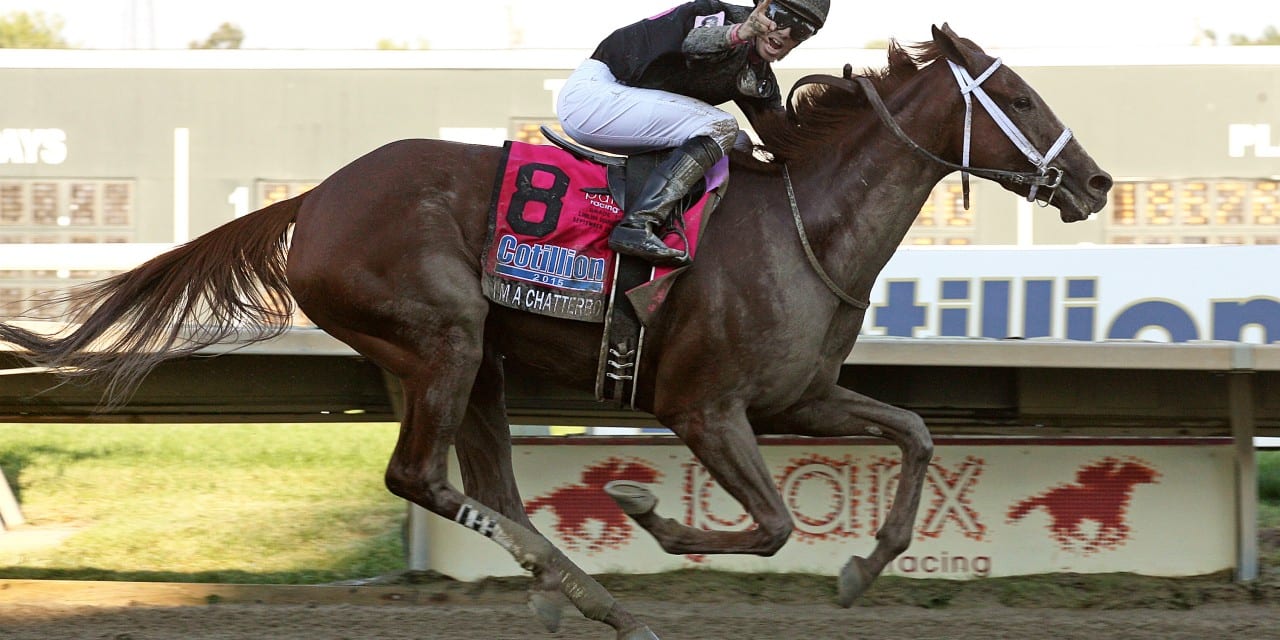 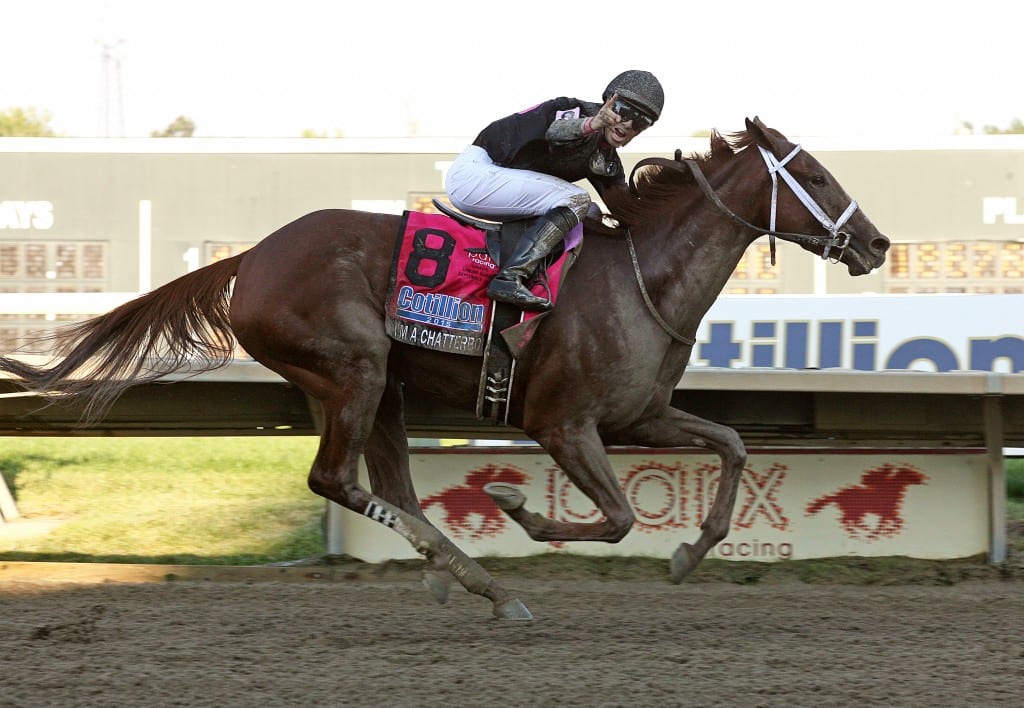 Florent Geroux and I’m a Chatterbox were, in fact, number one following Saturday’s $1 million, Grade 1 Cotillion. Photo By Barbara Weidl/EQUI-PHOTO

A big sign at the entrance to Parx Racing on Saturday directed the owners of stakes runners to a dedicated dining area on one of the upper floors of the clubhouse, a special hospitality area for the people who had brought their horses to run on the track’s biggest day of racing.

Barely an hour before post time for the $1 million, Grade 1 Cotillion, Carolyn Gray, owner/breeder with her husband Fletcher of favored I’m a Chatterbox, was surprised to learn about it.

“I had no idea,” she said, standing on the apron near the paddock. “We got here, grabbed a hot dog, and have just been wandering around.”

She wore a pink and black scarf bearing the name of her filly, the colors reflecting those of the Grays’ silks; Fletcher wore a pinkish jacket, while a family friend and Cindy Jones, wife of their trainer Larry, had also donned the roseate hue. The Grays are low-profile and low-key, but on Saturday, they weren’t hard to spot.

Their farm and their home are in Missouri, but they’d flown in from Lexington after watching I’m a Chatterbox’s yearling half-brother by The Factor draw a final bid of $285,000 at Keeneland. It was a lot of money, but it wasn’t enough to meet the reserve the Grays had set.

“We know what he is,” said Carolyn, talking before the Cotillion. “We have no regrets that he didn’t sell.”

Like her half-brother, I’m a Chatterbox was an RNA as a yearling, but she excited little interest in that same sales pavilion two years ago, buyers willing to go only as high as $30,000 for her.

The Grays breed about half a dozen horses a year, almost exclusively to sell, occasionally keeping one to race if it doesn’t do well at auction. Since 2000, horses they’ve owned have made 89 starts and won 13 races. Five of those wins, and all three of their graded stakes triumphs, have come with I’m a Chatterbox, including the Cotillion, the first Grade 1 win for both the filly and her owners.

The Grays and their friends watched the race from the rail just off the winner’s circle, standing a few yards before the finish line. They watched as their filly and jockey Florent Geroux found a comfortable spot on the rail a few lengths back of the leader, watched as Geroux tipped her wide coming home, watched as she seemingly effortlessly ran down the horses in front of her to win by two lengths, the Grade 1 theirs at last.

Back at the barn after the race, it was hard to tell who was happier, the Joneses or the Grays. They beamed as I’m a Chatterbox cooled out in the shedrow, her chestnut coat gleaming in the late afternoon light.  This was not a gathering of trainers and clients. It was a family, united in celebration of a win that felt both inevitable and elusive.

After two gritty races, including a nose victory in which she ended being DQed, a sub-par performance might not have been unexpected. But the filly showed the same talent and determination that have characterized her races all year.

Of course, Larry Jones had worked some horse whispering magic after the disqualification.

“We didn’t tell her that she got DQed,” an exuberant Jones joked later. “She still thinks she won the race, and I told her, ‘Your second Grade I isn’t going to be any harder than your first.’”

In between that race and this, she ran—and lost—another tough one, the Alabama, breaking badly and making a big late to run to finish second. She’ll get a rest now, said Jones, training until the Breeders’ Cup Distaff at Keeneland on October 30. She’ll ship there a week from today, to the track over which she broke her maiden last October in her first start.

“She does her best running off at least five weeks,” said Jones of the filly who’s run three straight Grade 1 races with four-week spacing, not finishing worse than second.

The most consistent three-year-old filly this year – with a record of 7-4-2-1—I’m a Chatterbox will head to the Breeders’ Cup a favorite to take home champion 3-year-old filly honors. And with Beholder heading to face boys in the Classic, she’ll likely face in the Distaff horses that she’s already beaten, including stablemate and Kentucky Oaks winner Lovely Maria.

“We saw [Beholder’s owner] B. Wayne Hughes in Lexington,” said Carolyn. “And we thanked him for sending her to the Classic.”

The Grays know from champions, having bred two of them, both with John Youngblood: Left Bank, the champion older horse in 2002, and Stardom Bound, champion juvenile filly in 2008. Between them they won eight Grade I races.

But, said Carolyn, breeding a Grade I winner is nothing like owning one. Not even close.

“This is the icing on the cake,” she said, then she reconsidered and laughed. “No, it’s á la mode.”

After that yearling RNA, the Grays tried again last year to sell I’m a Chatterbox, this time at a two-year-old sale, but a minor blemish led them to withdraw her and make the decision to keep and race her.

So as for that half-brother—will he, too, head to a two-year-old sale next year?

“Maybe not,” said Carolyn, a little impish, a little sassy, reveling in the thrill of the victory and affection for her filly.