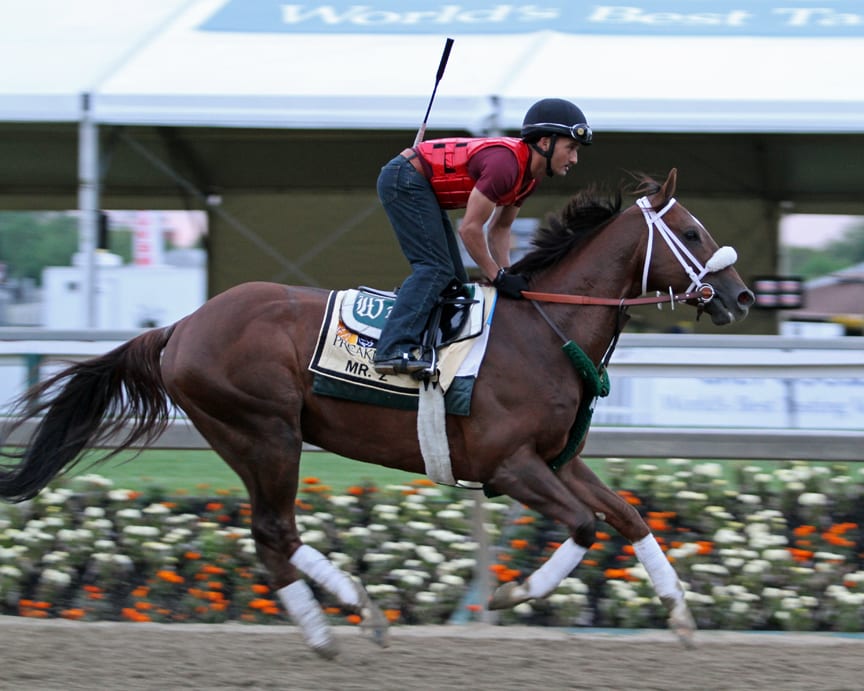 Multiple graded winner I’m a Chatterbox, racing for Fletcher and Carolyn Gray out of the Larry Jones barn opens as the 3-1 choice in the $1 million G1 Cotillion Stakes, when she takes on a eleven rivals from the three year-old filly division.

On the Derby trail from the start, Frosted did much of his prep work in Florida for trainer Kiaran McLaughlin. In his three year-old debut, the grey Tapit colt was second behind Upstart in the G2 Holy Bull Stakes January 24th at Gulfstream Park. Brought back to New York for the G1 Wood Memorial, McLaughlin got things corrected and the changes resulted in a big effort and an off-the-pace, convincing two length win. He ran well in the Kentucky Derby to finish fourth and then was second to American Pharoah in his attempt at spoiling the Triple Crown in the Belmont Stakes. His “second season” campaign began August 1st with a second to Texas Red in the G2 Jim Dandy at Saratoga and then he had a hand in the defeat of American Pharoah in the G1 Travers, hounding him throughout before weakening late to finish third. Joel Rosario has been named to ride.

Todd Pletcher will try to win his second PA Derby when he sends out Madefromlucky. Pletcher won the 2003 edition with Harlan’s Holiday and his Lookin at Lucky colt this year will open as the 4-1 second choice. Owned by Cheyenne Stables and Mac Nichol, he comes into the race as a multiple Grade 2 winner. After winning his three year-old debut in a first level allowance at Gulfstream in early February, he ran a terrific second behind American Pharoah in the G2 Rebel Stakes at Oaklawn May 14th. Less than two months later he’d get that first graded win, coming from off the pace to a victory in the G2 Peter Pan at Belmont Park May 9th. Following a sixth place finish in the Belmont Stakes, he went out to Mountaineer and won the G2 West Virginia Derby August 1st in his most recent start. JohnVelazquez gets the mount.

The legacy of the G1 Cotillion Stakes has been prominent for years, but a look at a list of the most recent winners shows evidence of just how strong this race has become. Havre de Grace, Plum Pretty, My Miss Aurelia, Close Hatches and Untapable have stood in the Parx winner’s circle the last five years and this year the field is topped by multiple graded winner, I’m a Chatterbox. Racing for Larry Jones, the Munnings filly opened her three year-old season with three consecutive stakes win, the ungraded, $125,000 Silverbulletday, the G3 Rachel Alexandra and the G2 Fair Grounds Oaks, all at the Fair Grounds. After starting slowly in the G1 Kentucky Oaks, she rallied late to finish a solid third and then finished in front of Curalina in the G1 Coaching Club American Oaks, only to be disqualified for late interference. Last time out at Saratoga, she closed ground on Embellish the Lace in the Alabama, but had to settle for second beaten just over a length. Jockey Florent Giroux has been aboard for all of her races this year and again gets the mount on Saturday.

The morning line second choice in the Cotillion is Grade 1 winner, Embellish the Lace. The lightly raced Super Saver filly will be making just the sixth start of her career and is coming off her biggest win. After finishing a disappointing ninth in the G1 Mother Goose back in late June at Belmont, she sat out two months before returning August 22nd in the G1 Alabama at Saratoga. She broke on top and led every step of the way, opening up a three length lead at the top of the stretch and then coming home a length and a quarter winner. She’ll look to make it back-to-back Grade 1 wins for trainer Tony Dutrow with two-time Eclipse award winner Javier Castellano aboard.

A terrific undercard is topped by the $300,000 G3 Gallant Bob Stakes, a six furlong sprint that has drawn a field of eight speedy three year-olds. The 5-2 morning line favorite is Katherine Ball’s Limousine Liberal. Trained by Ben Colebrook, the gelded son of Successful Appeal has raced just three times in his career but has already proven his mettle. He didn’t make it to the track until June 21st of this year and promptly won a maiden special weight at Churchill Downs. His next start was a resounding four length win in a first level allowance at Ellis Park. Last time out he tried the big boys in the G1 King’s Bishop at Saratoga and at 15-1 ran second to a rocket ship named Runhappy. Irad Ortiz, Jr. has been named to ride.

Two other stakes will be contested on the giant Saturday program. State-breds square off in the $100,000 Alphabet Soup on the turf at one mile and one-sixteenth while a field of eight will enter the gate for the first running of the $150,000 Bayern Stakes, a newly created stake named for the 2014 PA Derby and Breeders Cup Classic winner, Bayern.