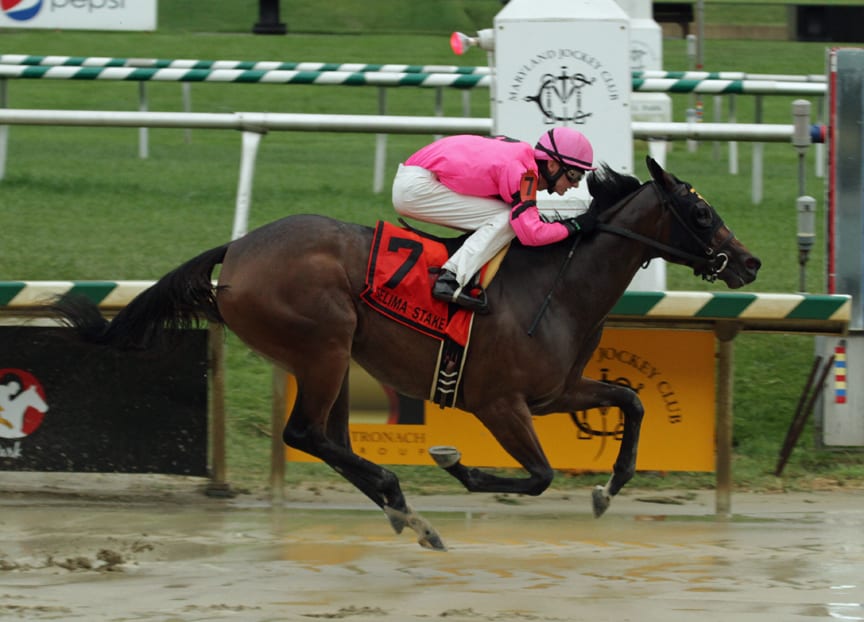 Ruby Notion impressed with an eight-length score in the Selima. Photo by Laurie Asseo.

Almost from their inception in the 1920s until the time they were moved to the turf course, the Laurel Futurity, initially contested as the Pimlico Futurity before being moved to Laurel Park in 1966, and the Selima Stakes were often the final stop for the year’s best East Coast two-year-olds.

In fact, the list of Laurel Futurity winners features a quartet of Triple Crown winners — Count Fleet, Citation, Secretariat and Affirmed — and several other horses that just missed sweeping the series, including Riva Ridge and Spectacular Bid and other standouts such as Top Flight, Challedon, In Reality, Honest Pleasure, Devil’s Bag, Bet Twice and Captain Bodgit. The ill-fated Barbaro won the 2005 edition, on the turf.

Although not quite as steeped in tradition, the Selima Stakes has also seen its fair share of talented winners, including Busher, Bed O’ Roses, Moccasin, Shuvee, La Prevoyante, Candy Eclair, Smart Angle, Heavenly Cause and Mom’s Command. Fair Star, who won the inaugural edition of the Selima in 1926, also won the Pimlico Futurity that year.

These days, however, the Futurity and Selima are more stepping stones than proving grounds.

Originally carded as 5 1/2-furlong races on the grass, the Laurel Futurity and the Selima, both contested for $75,000, were taken off the turf course and moved to the main track following heavy rains on Saturday. Despite the tardy surface switch, only one of the 18 horses slated to run in those events defected, probably because most of the juveniles had graduated on a main track somewhere. The winners of this year’s events would both have that, among other things, in common.

After winning his career debut on the main track at Gulfstream Park against maiden special company as a dramatically overlooked 75-1 shot, Formal Summation traveled north to Monmouth Park for the $60,000 Tyro Stakes on the grass last month. Well backed at 5-2, Formal Summation never crossed the wire. He lugged out badly on the backside and then jockey Javier Castellano pulled him up. Trainer Kathleen O’Connell found nothing physically wrong with the In Summation colt — he was training “like a rock star,” she said — and likened the result to one of those unsolvable mysteries of racing.

On Saturday afternoon, Formal Summation, with Antonio Gallardo up, went postward as the 2-1 second choice in the Laurel Futurity and delivered a much better performance. Away alertly to sit just off Mid Life Crisis and Louise the Laser down the backside, Formal Summation swept to command three-wide on the far turn and then drew clear in the lane to a nearly three-length score while covering the 5 1/2-furlongs in 1:06.21 for his second win in three starts.

“I still don’t know what happened to him in his last start,” O’Connell said in the winner’s circle on Saturday. “He went into the race perfect. He never acted up, and then he just didn’t fire at all. He came out of it great. He had a good workout last week, so I figured he was okay to send down here. We were going to run him on the turf or the dirt. I think he can handle any surface. I also think he won’t have any problem with more distance. He’s got a lot of ability.”

It is far too early to compare Formal Summation to the long list of stellar past winners of the Laurel Futurity. When the race held Grade 1 status it was a route race in the fall, but now it is a one-turn sprint and usually contested on the grass. The weather forced the last-minute surface switch, but did not alter the premise of the race. While many past Laurel Futurity winners had already established themselves before arriving, Formal Summation is simply looking to find his niche among the juvenile ranks.

“This race could prove to be a stepping stone for him,” O’Connell said. “He’s got plenty of early speed and he can handle either surface. We might try him back on the turf again next time, but I definitely think he can go longer. I don’t really have anything in mind for him at this time. But I’ll find something for him next month. I don’t think he’ll need much time between races. He bounced back from that Monmouth race okay and I think he will try something longer next time.”

One race earlier on the card, Ruby Notion, with Trevor McCarthy up, splashed to an eight-length victory in the $75,000 Selima Stakes. Unlike Formal Summation, Ruby Notion had already proven herself on both surfaces and had run well on two different continents. The West Virginia-bred daughter of Great Notion, trained by Wesley Ward and saddled for him at Laurel by Jose Corrales, had won at first asking against maiden $40,000 claimers at Churchill Downs, ventured across the Atlantic Ocean to run a respectable fifth in the $96,000 Windsor Castle Stakes against the boys on the grass at Royal Ascot, then returned home to capture the $62,000 Colleen Stakes on the lawn at Monmouth Park as the 6-5 favorite.

When the Selima was moved from the grass to the sloppy main track, Ruby Notion was hardly fazed by the surface switch. She broke very alertly to sit just off Atara down the backside and through the far turn, disposed of that one at the head of the lane, and cruised home as much the best while stopping the timer in 1:05.06. Her winning time would prove to be more than a full second faster than the one Formal Summation would post in the Laurel Futurity roughly 30 minutes later under identical conditions.

“Really, my only instructions were to let her go out of the gate and just sit there with her,” McCarthy said. “She has a lot of natural early speed, so I didn’t have to ask her. I just sat off the 4-horse [Atara] until the top of the lane, and I asked her a little and then she just took off. I never really asked her at all in the lane. She was just doing it on her own. She’s got plenty of natural ability. I don’t think she will have any problem stretching out. She just did it easily for me today.”

Only time will tell if Ruby Notion will ever join the likes of past Selima winners, but in one respect she is a throwback to several past champions of this event. Ruby Notion has now won three races at three different tracks and she has competed at four different ovals and even made a trip across the Atlantic Ocean and back.  Whether she’ll join the list of past Selima winners such as Heavenly Cause and Mom’s Command who won Eclipse Awards?  That remains to be seen, but Ruby Notion has already displayed plenty of versatility, and her win in the Selima may be another stepping stone to a solid sophomore season.