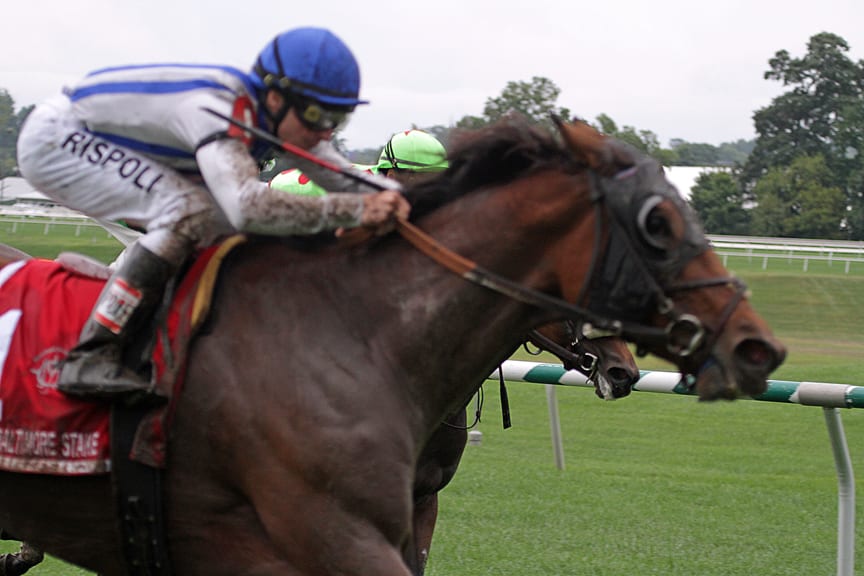 It’s a concept so well known that its attendant phrase — horses for courses — has entered the lexicon.

The notion that certain horses prefer some tracks to others is perhaps unexceptional; people have their preferences, too.  At the same time, it remains something of a mystery, one which we generally try to bury in a blizzard of vague phrases.

Saturday at Laurel Park and Delaware Park, a pair of horses known for their love of the local courses proved once again the bromide about horses for courses while doing very little to clarify how exactly that works.

Galiana, the reigning queen of the Midlantic horse for course angle, easily bested five rivals at Delaware Park to take the Tax Free Shopping Distaff on Delaware’s Owners’ Day for the third consecutive year.  The win also ran her record to nine wins from 10 starts over the Delaware main track.

Trainer Rodolfo Romero had one theory.

“She’s the type of horses that loves a fast, firm surface, [and] she loves to hear her feet rattle,” he said prior to the race.  “She hates deep going. Delaware’s track is quick and horses bounce over it, and that’s what she loves.”

OK, as far as it goes, but Delaware is hardly the region’s only track considered to have a “fast, firm surface.”

What’s more, she’s won at the Stanton oval on tracks rated fast, wet fast, good, and sloppy (sealed), which seems to suggest the surface itself is just one of the factors.

Company presumably matters, too, since she went off Saturday at 1-5 odds and has been the favorite in four straight over the strip.

Interrupted’s another runner with a clear racetrack preference.  The Graham Motion trainee won Saturday’s $150,000 Lady Baltimore Stakes to improve to four-for-four over the Laurel Park turf.

“She really loves the course,” said Motion of his filly’s perfect local ledger.  “… That’s why we ran her there.”

The four-year-old daughter of Broken Vow has just a single win from five starts at other tracks.

Company likely has something to do with her mark.  She’s made four career starts against maiden and allowance company, and three of those have come at Laurel.  On the other hand, she’s never been favored in a race at Laurel and now owns two wins over the strip when she went off at 5-1 or higher.

What’s more, while her first three Laurel starts came over a track rated firm, the track for Saturday’s Lady Baltimore was, after a sudden severe storm blew through, yielding.

Jockey Matt Rispoli — who has ridden her to all four of her Laurel wins — tried gamely to explain the phenomenon.

“Honestly, I think maybe she doesn’t like to ship,” he assayed.  “It’s an easier ride from Fair Hill to here than most other places.”

And she has been something of a traveler.  Her five non-Laurel starts have come at five different racetracks.  On the other hand, Delaware Park is closer yet to Fair Hill, and she ran perhaps the most disappointing race of her career when sixth as the favorite in the Justakiss at Delaware in June.

Galiana has the “home field” advantage of training at Delaware Park, and perhaps familiarity breeds wins.  Interrupted has no such advantage, however, since she trains at Fair Hill and only gets to Laurel to race, and that only occasionally.

Whatever the reasons — the rattling feet, the shorter trip, the easier company, the right jockey, the way the paddock is aligned, or perhaps the way the sun sits just so in the sky — it’s clear Delaware and Laurel have all the appeal of home to Galiana and Interrupted, and home, as we all know, is where the heart is (and the wins are, evidently).

A $2 parlay wager on Interrupted at Laurel would have paid off at nearly $588 after Saturday’s race, which means that her love of Laurel is something that a bettor (or owner, or trainer) can literally take to the bank.