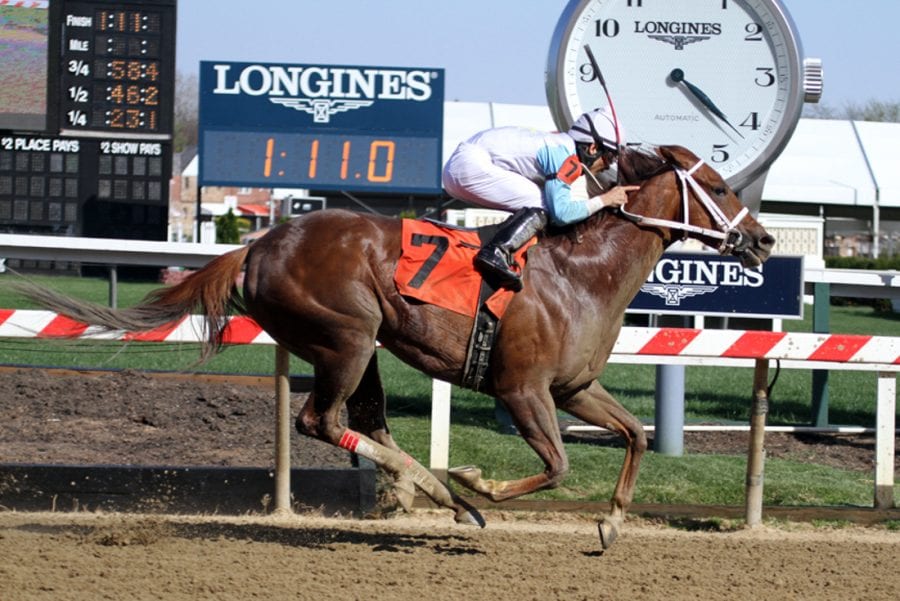 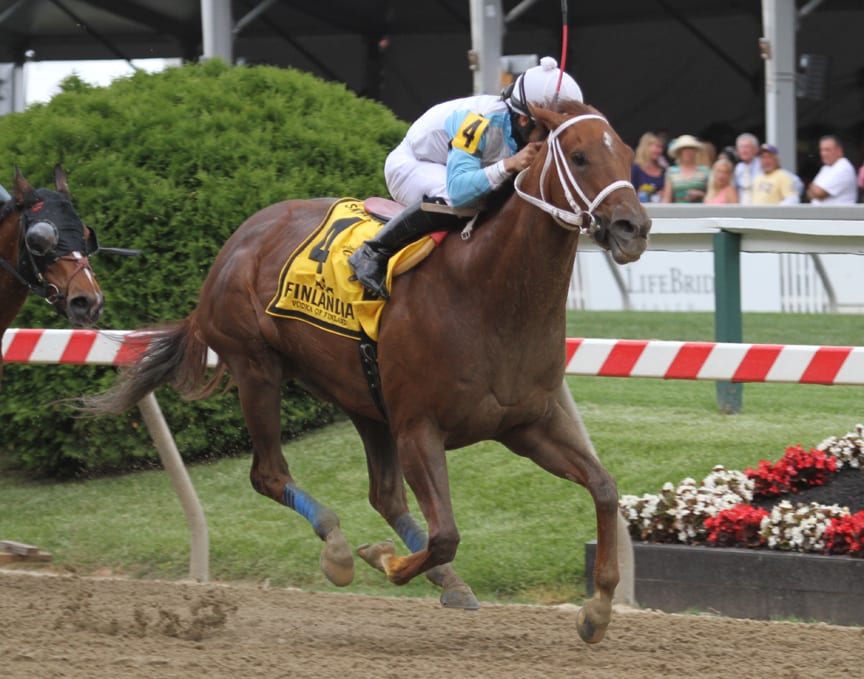 Galiana won the Skipat in May at Pimlico. Photo by Laurie Asseo.

Plenty of thoroughbreds seem — for whatever reason — to be at their best when they run over a particular surface at a particular track.

At Delaware Park, one would be hard pressed to find a runner who is more at home, or more successful, racing over the main track than the outstanding sprinting mare Galiana.  The five-year-old daughter of Stonesider – Baby Jess (ARG), by Interprete (ARG) is even money on the morning line for Saturday’s $75,000 Tax Free Shopping Distaff Stakes, a six furlong test for Delaware-certified runners on Saturday’s Owners’ Day card at Delaware Park.

Galiana won the first race of her career over the Delaware surface on June 8, 2013 when she overcame ducking in at the start to romp to a seven and three quarter length win over a field of $7,500 level maiden claimers.  Two years and a month later, on July 11, 2015 the mare posted her 14th career win when she rallied from off the pace to capture the $50,000 Dashing Beauty Stakes for the second straight year.

In three years of competition Galiana has established herself as one of the top female sprinters on the East Coast, earning more than $570,000.

And she hasn’t earned that money by racing in easy spots. She has six stakes wins from those 14 tallies, and this spring she won back-to-back sprint stakes at Pimlico, taking the $100,000 Primonetta Stakes then coming back to capture the $100,000 Skipat Stakes on Preakness Day.

While she has proved she is versatile enough to win anywhere — she also has victories at Saratoga, Tampa Bay Downs, and Atlantic City — there’s little question she is most at home at Delaware Park. The win in the Dashing Beauty was the eighth victory for Galiana from nine career starts over the Delaware main track.  Five of those wins have been in stake races, including two wins each in the Tax Free Shopping and the Dashing Beauty.

Rodolfo Romero is Galiana’s owner-trainer and the man who groomed the great Afleet Alex during the 2005 Preakness and Belmont stakes winner’s career.  He said Galiana didn’t give any indication she was going to be anything special when he began training her.

“She never showed a lot of aggressiveness when we took her to the track in the mornings,” Romero recalled.  “She’s always been very laid back when she trains.  She doesn’t pull or get eager, she just goes about her business. That’s why we ran her for $7,500 the first time.”

But that debut, Romero said, opened his eyes.

“When they sprung the latch, she ducked in at first, but once she got straightened away she took off after the leaders and was full of run,” the trainer said.  “She just blew her competition away that day and I remember thinking, ‘Wow, this is a whole different horse then I’ve been seeing in the morning!'”

Of course, it didn’t hurt that she was running at her favorite venue.

“She’s the type of horses that loves a fast, firm surface, [and] she loves to hear her feet rattle,” Romero observed.  “She hates deep going. Delaware’s track is quick and horses bounce over it, and that’s what she loves.”

With three wins from four starts this season and a career high Beyer speed figure of 93 earned for her victory in the Primonetta at Pimlico, Galiana seems to be taking her talent to another level at age five.

She’s been training strongly towards her next start, most recently blazing a half-mile in 46 2/5 seconds on August 25 — the fastest of 13 at Delaware that day.  On Saturday, she’ll contend with just five rivals in a bid to win her third straight Tax Free Shopping.

“She’s better than she’s ever been,” said her owner-trainer, “She’s got a mind of her own when she races and sometimes she surprises me with some of the things she does, but it usually turns out that she knew what she was doing.”