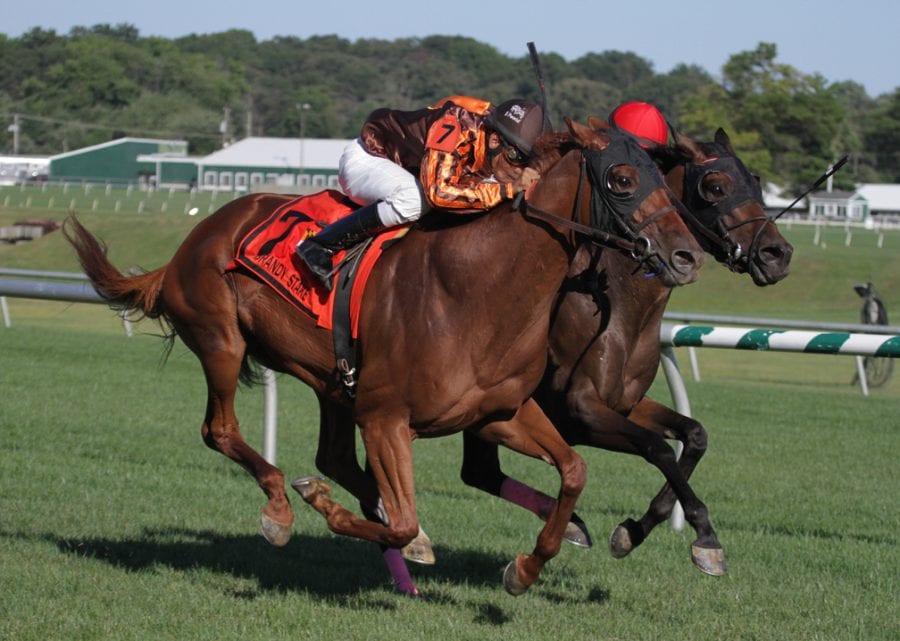 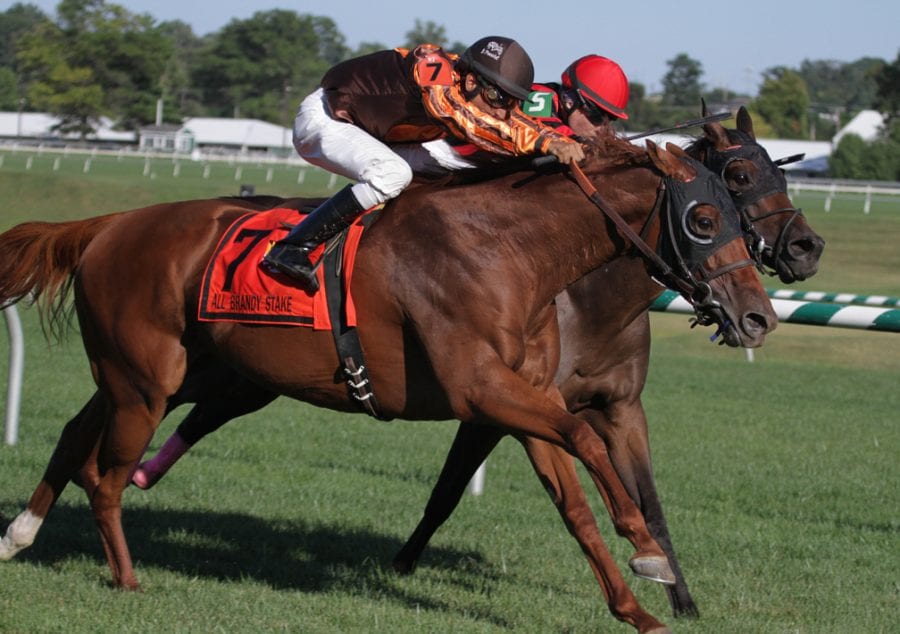 Joy edges Vielsalm in the All Brandy. Photo by Laurie Asseo.

A wide-open group, including two last-out stake winners, is set to contest Saturday’s $150,000 Lady Baltimore Stakes at Laurel Park.  Six of the nine runners have morning lines of 6-1 or lower, and lukewarm favorite Fasnacloich is 7-2.

Though Fasnacloich is trained by Hamilton Smith, trainer Graham Motion might have the strongest hand here, with three of the nine starters hailing from his barn.  Motion’s trainees include Pin Oak Stud’s Interrupted, the 4-1 second choice; Dark Hollow Farm’s recent All Brandy winner Joy, who’s 6-1; and Arindel’s inconsistent Pink Poppy, also 6-1.  Interrupted is cross-entered in a race at Kentucky Downs.

“All horses have their own running styles,” Motion said. “I don’t see them interfering with each other.”

Interrupted narrowly won last year’s Penn Oaks on the Penn Mile undercard at Penn National and previously ran third in the Grade 3 Florida Oaks.  She is undefeated in three tries on the Laurel Park turf and most recently earned a narrow score over allowance foes over the strip.  Matt Rispoli, who rode her last out, will once again be in the irons.

“She’s undefeated at Laurel, 3-for-3,” noted Motion.  “She ran really well when she won last time and this is a good, logical spot for her.”

The bad news for Interrupted lies in her two-back effort, a disappointing, well-beaten sixth place finish as the favorite in the Justakiss at Delaware Park.  Two runners that finished ahead of her that day — runaway winner Fasnacloich and show horse, and stablemate, Joy — are here.

Fasnacloich has run respectably in two subsequent starts without visiting the winner’s circle.  She ran a good fourth in the Grade 3 Robert Dick Memorial Stakes at Delaware Park, beaten just 1 1/2 lengths, and then was beaten four while finishing sixth in a stake at Mountaineer Park.  Though winless at Laurel, she has won twice at the 1 1/16 mile distance.  Julian Pimentel, who rode her in the Justakiss, will do the honors.

Joy earned a game head victory over Vielsalm last out in the All Brandy at Laurel Park to register the third stakes win of her career.  She was a well-beaten third in the Justakiss and will be making the step up from state-bred to open company, but her two prior stakes wins were both against open rivals.  She may appreciate the slightly shorter distance here, as well.  However, jockey Julian Pimentel, who rode her to her All Brandy win, has jumped ship to the favorite.  Forest Boyce is slated to ride in his stead.

Motion’s third runner, Pink Poppy, has been somewhat of an inconsistent performer, mixing stellar efforts with disappointing ones.  She won the Sunshine Millions Filly and Mare Turf in front-running fashion earlier this year, and two back ran a good third at 29-1 in the Grade 3 Dr. James Penny Memorial at Parx Racing behind Coffee Clique and Testa Rossi, a solid pair of runners.  But she also has less promising efforts on the ledger: a sixth in the De La Rose, 10th in the Miss Liberty, 11th in two other races.

A pair of other runners are also in single digits.  Speed Seeker (5-1) won the G3 Ontario Colleen at Woodbine in impressive fashion last year but hasn’t been able to scale such heights since, having won just once, against allowance rivals, in nine starts since.  And Michael Matz trainee Sumba Sunset (9-2) has just a single win from 12 career starts, though she has finished second or third six additional times, most notably when second a head in the Grade 3 Boiling Springs at Monmouth a year ago.

The rest of the field includes local runner Brenda’s Way (20-1), who won the Geisha on the Pimlico main track in April and is trained by Damon Dilodovico; former Graham Motion trainee Red Hot Tweet (15-1), now conditioned by Tres Abbott at Fair Hill and cross-entered at Laurel and Kentucky Downs; and recent Jameela winner Monster Sleeping (10-1), the Dale Capuano trainee who seems always to give a good effort.