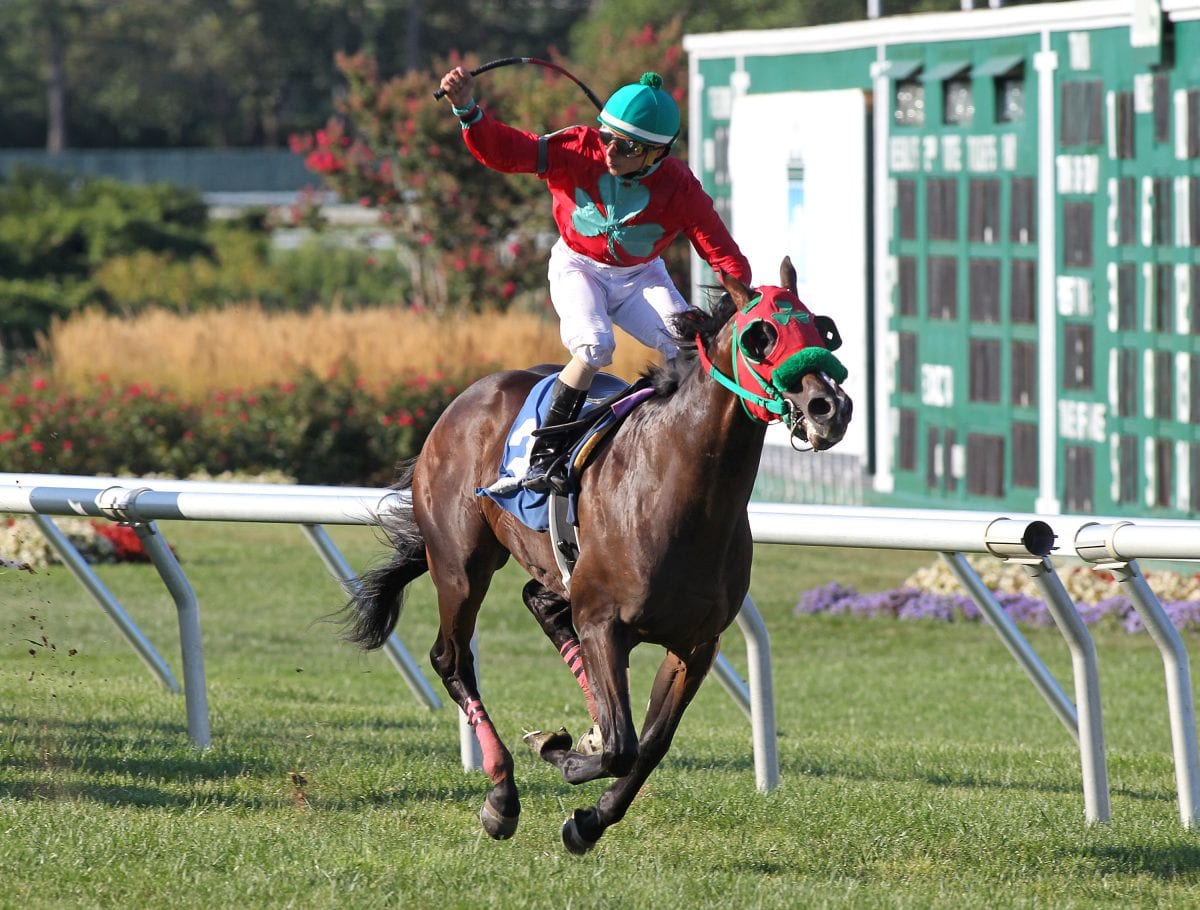 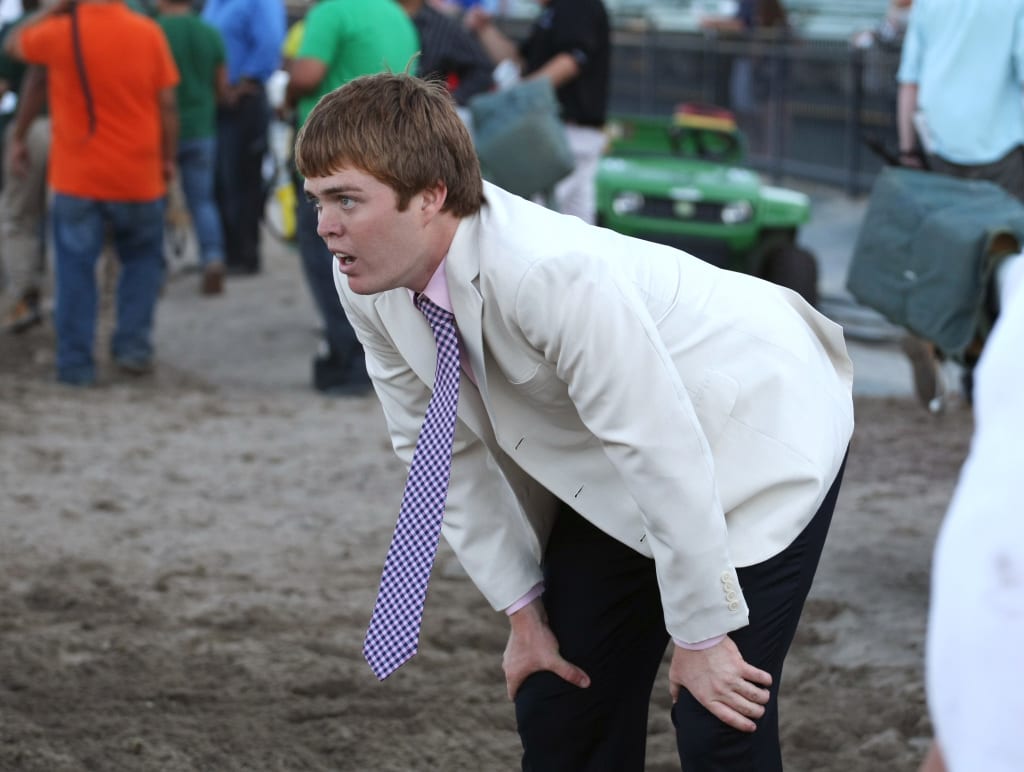 Trainer Liam D. Benson agonized while sweating out an inquiry before stewards left his horse, Expected Ruler, in first in the Tyro. Photo By Bill Denver/EQUI-PHOTO

Most 20-year-old college students are getting ready this week to make a return to their respective dormitories for the beginning of another scholastic year.

But Liam D. Benson isn’t ready to head back to the University of Louisville just yet.

Despite his young age, Benson is a licensed trainer. He trains horses out of the Mayo West Farm stable owned by his parents, Liam F. and Margaret.

“I was born in Red Bank, N.J.,” the younger Benson said. “When I was 9 years old, we moved to Ocala, Florida, because my dad retired and got bored, so he bought a horse farm. In the first year, we bred 36 horses. But I grew up helping out  around the farm. I bailed hay. We had cattle on the farm and I helped take care of them. I ended up doing a little bit of everything.”

“I was at Churchill Downs and I got a job with Steve Asmussen as a hot walker,” Benson said. “It went well. I learned a lot as a 16-year-old for sure. They had some nice horses while I was there.  I also learned a lot from Derek Ryan, who trained for our family for years.”

In 2012, Benson applied for an internship at Delmar Race Course.

“But I never heard back from them,” Benson said. “When that fell through, I went to Colonial Downs (in Virginia) and got my trainer’s license.”

Del Mar’s silence might have been to everyone’s benefit.

On Father’s Day of 2013, Benson was the official trainer for his first thoroughbred race. Three weeks later, he had his first winner at Colonial Downs.

The horse, sired by Kentucky Derby winner Giacomo, was just a second time starter.  He rallied in the last eighth of a mile to post a narrow, half-length victory.

“That was it,” Benson said. “You weren’t about to pull me back after that one. There was nothing like it. I was hooked. How could I not be?”

Overall, Benson has trained seven winners from 65 career starters, but none like the one he entered in the Tyro Stakes at Monmouth Park on August 9.

Expected Ruler is a 2-year-old colt that Benson and his father actually birthed in March of 2013.

“Dad and I pulled this one out of his mother (Expected Pleasures),” Benson said. “So he’s been special to our family.”

Expected Ruler has a fine pedigree.  His sire is Leroidesanimaux, a multiple Grade 1 winner who was the 2005 Eclipse champion turf horse.  Expected Pleasures,  Maryland-bred by Allen’s Prospect, herself twice placed in stakes company, both times as a two-year-old.  So Expected Ruler’s pedigree suggested he could win, and win early.

But Expected Ruler wasn’t exactly setting the world on fire in workouts earlier this year, with a series of middling breezes over the Monmouth Park strip. 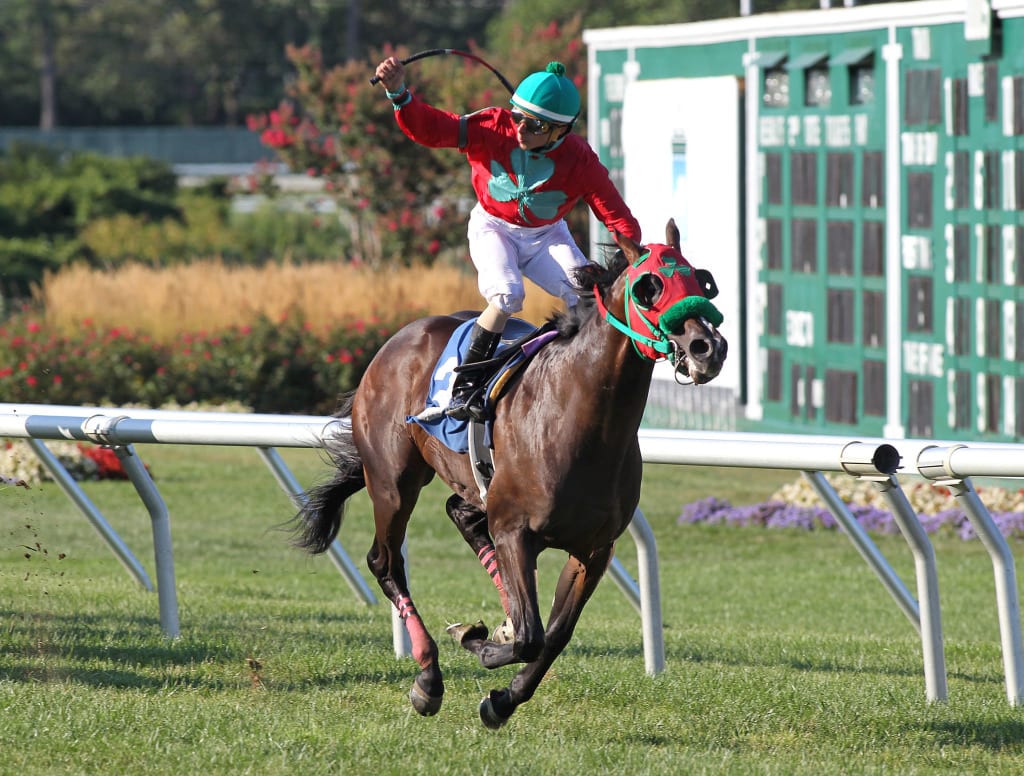 “He really wasn’t showing much,” Benson said. “He didn’t show me that he was stakes quality.”

However, on July 25, Benson made an equipment change.

“We put blinkers on him and it was like a light bulb went on,” Benson said. “Suddenly, he became a lot more of a threat. We had him do one workout and he tore up the track.”

Expected Ruler galloped three furlongs on the dirt at Monmouth in 35 2/5 seconds with Wilmer Garcia aboard, third fastest of 22 at the distance.

“Wilmer never touched him and the horse just took off,” Benson said. “Wilmer said to me, ‘This horse is a freak.’ I couldn’t believe what I saw.”

In Expected Ruler’s next workout Aug. 1, he went 48 seconds flat over four furlongs, ninth best of 93. This gave Benson the idea to enter Expected Ruler in the $60,000 Tyro Stakes for his career debut.

“People were telling me that I was crazy, that the race was too tough,” Benson said. “Dad and I had some heated discussions whether to put him in the race. But I thought the horse was pretty good. It was a one turn stakes race on the turf. He never even worked out on turf, but had turf in his pedigree. Eventually, we would like him to go two turns, but for now, I just figured it was worth a shot. He was a first-time starter, sure, but we put the money up when it mattered.”

Benson forked over $200 to enter the horse and another $400 to start. It was a bit of a gamble, perhaps, but turned out to be money well spent.

In the race, Expected Ruler went off at 47-1 and found himself treading water behind horses in sixth as the field turned for home. But Garcia moved Expected Ruler precisely along a narrow passage on the rail.  Expected Ruler romped home by 2 ½ lengths in a time of 56.90, although there were some tense moments, as a steward’s inquiry flashed on the tote board.

“It was a tight move, but I knew that he didn’t interfere or impede the other horses,” Benson said. “When he won, I just said, ‘Wow.’ I couldn’t believe it happened. I had hoped we could win, but I didn’t know.”

With that, the 20-year-old college student had his first stakes winner. Expected Ruler is only the second Benson-trained horse that has been entered in a stakes race. Wildcatpleasures was fourth in the Grade III Pegasus (at odds of 29-1) last year at Monmouth Park.

Needless to say, the big victory made horse players happy, including the one who trained Expected Ruler.

“You can say I made a few bucks that day,” Benson said.

“To see him do well was pretty nice,” Benson said in understatement.

Benson has two winners and two third place finishes at Monmouth this summer and says that it meant a lot to have his first stakes winner at Monmouth.

“I grew up in this area,” Benson said. “I grew up going to the Haskell every year. Now, I’m getting the chance to win races at the track I went to when I was a 5-year-old kid. It’s the best thing in the world.”

Benson will take two of the barn’s six horses with him to Louisville when he leaves for the start of school this week. Expected Ruler will be shipped to Churchill Downs to prepare for his next race, which could be the Grade III Iroquois Stakes on the opening day of the fall meet at Churchill Downs Sept. 12.

The $115,000 Iroquois is a Road to the Kentucky Derby qualifying race, with the winner receiving 10 points towards qualifying for the 2016 Kentucky Derby. The race is a mile and a 1/16th on the main dirt track at Churchill.  It’s also a “Win and You’re In” race to the Breeder’s Cup Juvenile at Keeneland on Oct. 31.

“I have to try to control my head,” Benson said. “The horse just won going one turn on the turf. He has a long way to go. But as long as he’s ready, we’ll hopefully run him.”

Benson said that the plan is to get Expected Ruler two or three more starts this year, then give him a well deserved rest.

“My parents have been at this for a long time,” Benson said. “They deserve to have a nice horse. We’re going to enjoy this ride.”

Benson’s only other winner this year at Monmouth was Pacific Image on July 31, but the 4-year-old gelding was claimed by Charles and Harriet Harvatt out of that race.

The Bensons own Mulligan’s Singer, a 3-year-old filly that raced last Sunday and finished fifth. Foileen is a 4-year-old gelding that has also raced at Monmouth this summer, finishing third once, and is scheduled to start on August 22 at the same track.

Benson will take a promising 2-year-old Holy Bull colt named after the N17, a highway in Ireland, to Churchill Downs with Expected Ruler this week.

And then there’s the matter of attending classes. Benson is enrolled in the prestigious equine business program at Louisville, so he’s in this business for the long haul. He will have to juggle training his horses and hitting the books hard this fall, because he withdrew from classes last semester in order to work further with his horses.

“It’s going to be tough,” Benson said. “I know that. But there’s nothing like this. I enjoy getting up at the crack of dawn and going to the barn. It’s nice to work with horses instead of humans.”