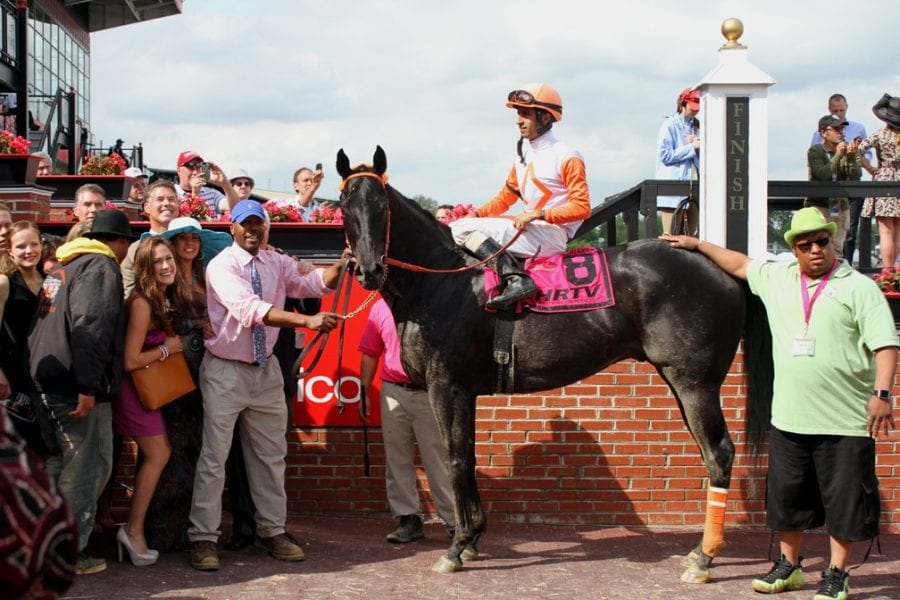 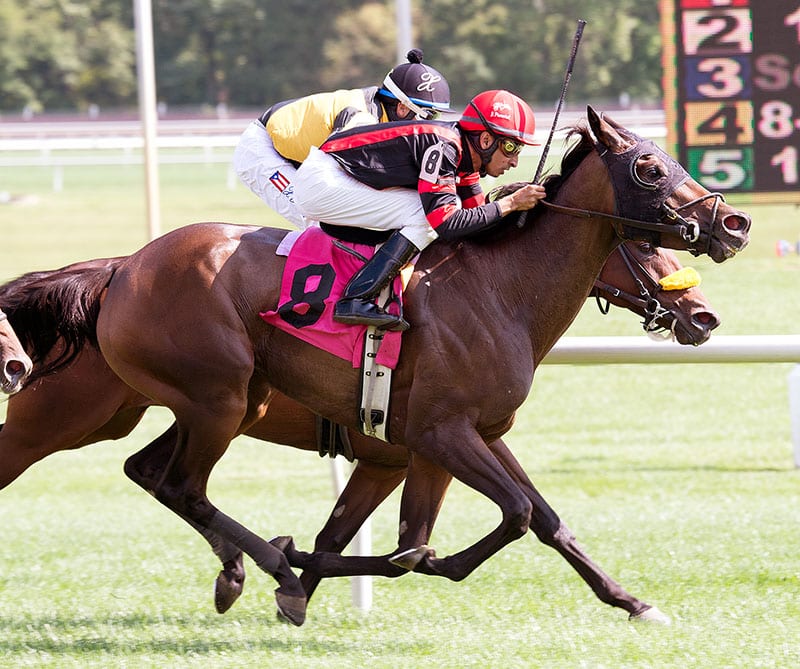 Vielsalm rallies past ’em all to win the 2014 All Brandy, for Maryland-breds. Photo by Jim McCue, Maryland Jockey Club.

Nine-year-old Ben’s Cat figures to be a strong favorite in the day’s first of four stakes, the 5 1/2 furlong Mister Diz on the grass.  A win in the event would give him six consecutive Mister Diz wins, a remarkable achievement exceeded by only one American flat horse in history, Leaping Plum, who won eight runnings of the Grasmick Handicap at Fonner Park.

Ben’s Cat has made four starts in 2015, winning the Jim McKay Turf Sprint at Pimlico in May after a furious late rally. He also ran second in a Pimlico allowance test and was second a nose in the Pennsylvania Governor’s Cup at Penn National.  He most recently ran a disappointing sixth in the Grade 3 Parx Dash on July 11.

“If it was a normal horse, you’d just say he ran a bad race,” said trainer King Leatherbury the day after the Parx Dash.  “But he’s not the kind that does that. But he’s fine this morning and maybe it was just a bad race.”

Bred and owned by Leatherbury, Ben’s Cat, a son of Parker’s Storm Cat-Twofox, by Thirty Eight Paces, will be seeking his 30th career victory in his 50th career start, and he has earned more than $2.4 million.  Regular pilot Julian Pimentel will be in the irons.

The race will also be the first stakes race for conditioner Leatherbury since his induction into the national racing Hall of Fame August 7, at which he brought down the house with his customary comic routine.

Three races later, a large and contentious group of older fillies and mares will tackle the nine-furlong All Brandy Stakes, among them defending champ Vielsalm.

Vielsalm, formerly trained by the late Dickie Small and now conditioned by his former assistant, Dylan Smith, gave Smith her first stakes victory when she  ran down favored Nashly’s Vow to win by a neck in last year’s edition.  But the five-year-old mare by Fairbanks-Merriweather, by Opening Verse, has not found the wire first in five subsequent starts, despite several good efforts.  Most recently, she ran third against the well-regarded Marabea in a second-level allowance at Delaware Park.

Vielsalm has won four of 27 races, and a placing in this event would push her career earnings past the $200,000 mark.  She has won both tries at the All Brandy distance of nine furlongs.

Three other runners who contested last year’s All Brandy — show horse Joy, Debbie’s Tude, and Green Wave Girl — are also entered in this event.  Of the trio, Joy, a multiple stakes winner, figures to take the most betting action.