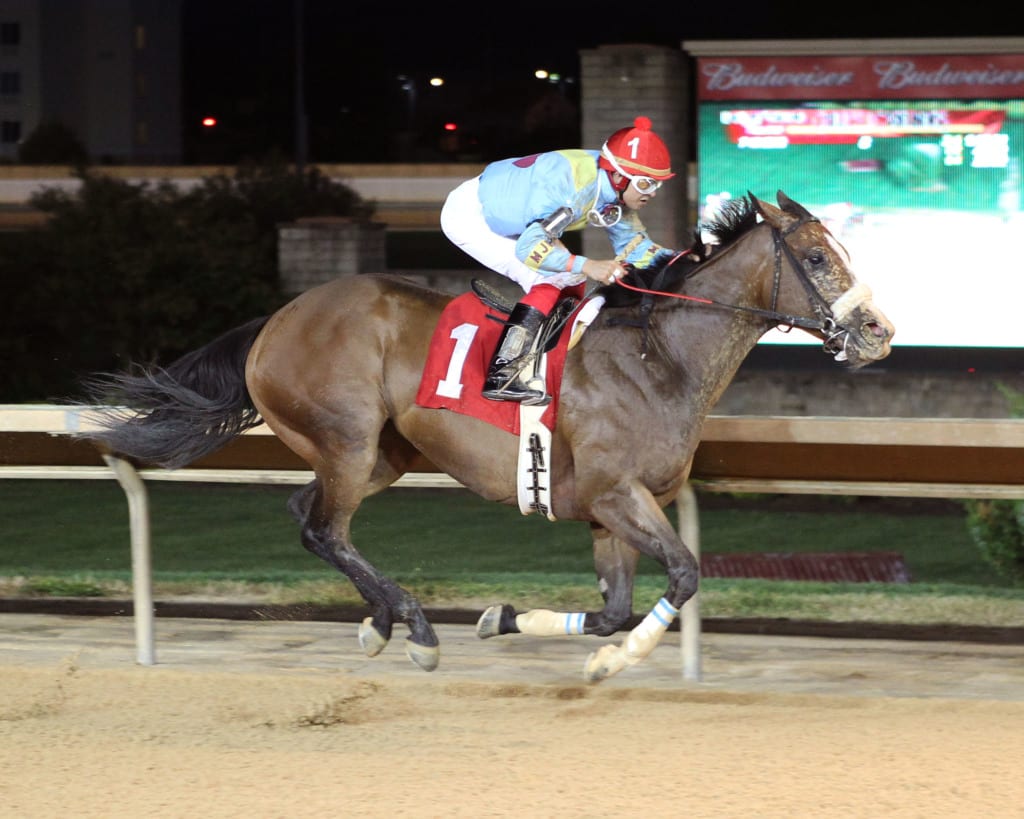 Chrome Mine is one of two fillies that give trainer David Walters a strong hand in the distaff division at Charles Town. Photo by Coady Photography.

Heading into this Saturday’s edition of the $50,000 Sadie Hawkins Stakes for West Virginia-bred fillies and mares at Hollywood Casino at Charles Town Races, trainer David Walters has a decision to make.  He has entered a pair of talented distaffers in the seven-furlong affair and he will contemplate up until scratch time the morning of the race whether to run one or both this weekend.

In recent years the Sadie Hawkins has belonged to the late Down Town Allen, who won it four consecutive times and twice used it to prep for the West Virginia Jefferson Security Bank Cavada Breeders’ Classic Stakes on Breeders’ Classics night.  But the millionaire Down Town Allen was euthanized earlier this year after breaking down in the Original Gold Stakes on the Charles Town Classic undercard in April.

Whether this year’s Sadie Hawkins will serve a prep for the Cavada remains to be seen, but Walters may take two cracks at the big race, with his fillies Chrome Mine and Cuppa Mocha Mojo.

Walters won the 2007 Cavada with a talented homebred named Carnival Chrome, the dam of Chrome Mine, a four-year-old daughter of Mine Shaft owned and bred by Michael J. Miller. Chrome Mine finished second in the West Virginia Division of Tourism Breeders’ Classic in her season finale last fall at age three, but she has come back to win two starts against allowance company this summer and will head into the Sadie Hawkins having won seven of nine starts, including last year’s Sylvia Bishop Memorial Stakes, and banked nearly $150,000 in her career.

Cuppa Mocha Mojo, a four-year-old daughter of Mikimoto’s Mojo out of the Robyn Dancer mare, First of Class, has won all five starts in her career for owner-breeder Terri Catlett. Cuppa Mocha Mojo got a belated start to her career, but debuted in style when capturing a 4 1/2 furlong maiden special weight event by a remarkable 12 lengths last October. She has since won four more times, three of them at the two-turn distance of 6 1/2-furlongs, but the Sadie Hawkins would be her first attempt at seven panels.

“People ask me to compare the two fillies all the time and they want me to say which one is better,” Walters said on Wednesday afternoon after entering both for the Sadie Hawkins. “They both have a lot of ability. Chrome Mine got an earlier start for me, winning going two turns as a three-year-old and she raced really well last year. When she was done for the year, Cuppa Mocha Mojo made her first start and won easily. She has since been able to stretch out.” 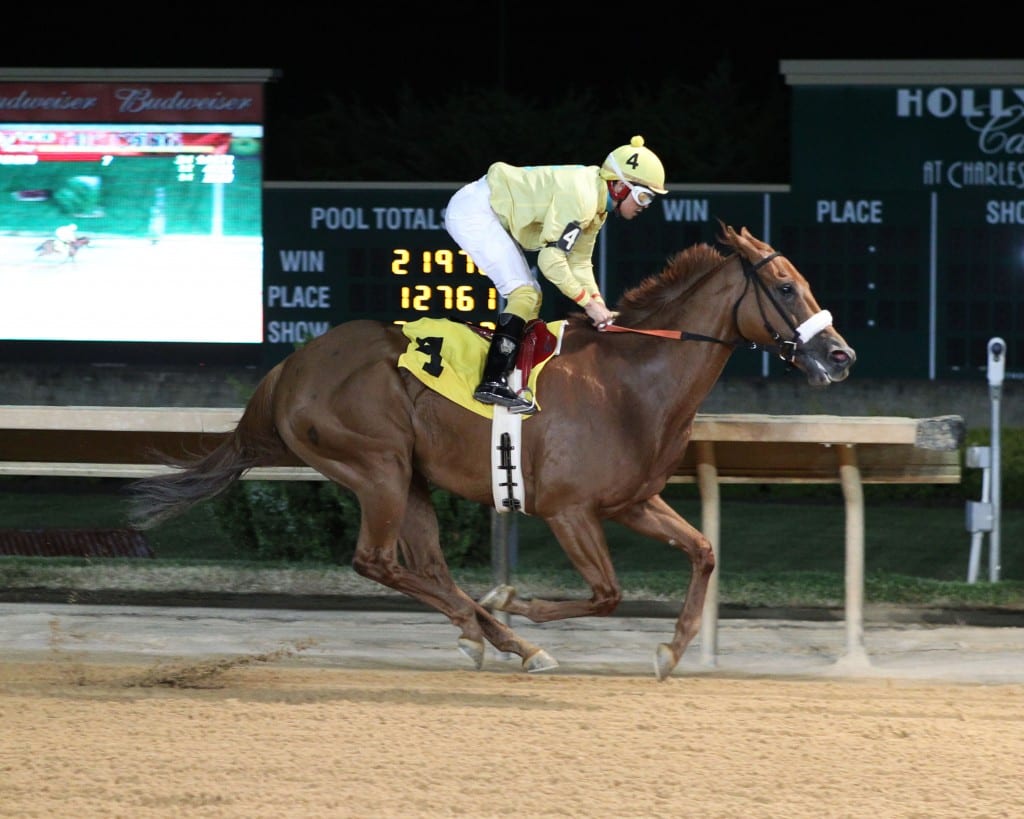 Chrome Mine had won at first asking on May 15, 2014, winning a two-turn maiden special weight event by 11 lengths over a sloppy track. She won her first attempt against winners in her next outing then after a third-place finish in another allowance event came right back to win an allowance race handily and then captured the Sylvia Bishop Stakes for state-bred three-year-old fillies and the Ann Hilton Handicap before running second on WV Breeders Classics night.

“Considering she did not make her first start until May, I thought she ran well throughout the campaign,” Walters said. “She won a couple of allowance races and then the Ann Hilton and then she ran well on Breeders Classics night but just got beat at the wire [by Cat Thats Grey]. We gave her the winter off and she trained back this spring and she’s done well. I might run them both, but I might keep one out this time.”

By the time Cuppa Mucha Mojo made her career debut last October, Chrome Mine was set to conclude her three-year-old season. But the daughter of Mikimoto’s Mojo made her presence known right from the outset, winning a 4 1/2-furlong sprint by 12 lengths at first asking six days before the WV Breeders Classics and then stretching out to take a two-turn allowance event going 6 1/2-furlongs five weeks later.

Like Chrome Mine, Cuppa M0cha Mojo got the winter off and returned fresh and fit to capture a one-turn allowance dash on May 27. She has since recorded a pair of victories in two-turn allowance events over the track on June 27 and July 23, respectively, and would head into the Sadie Hawkins with an unblemished record. She and Chrome Mine have won all five of their combined starts this year and boast 12 victories in 14 outings overall between them.

“She really had her running shoes on that first start,” Walters said of her debut. “She was really impressive that night. I was glad to see her stretch out and win going two turns in her next start. After getting the winter off she came back full of run. She was good in that one-turn allowance and then was able to rate off the speed in her last two starts. I liked seeing her race from off the pace. It shows me she’s calmed down and she’s matured.”

Walters could run one or both in this weekend’s Sadie Hawkins and he could also do the same next month when the track offers the Ann Hilton Handicap as its final prep for the $75,000 Pink Ribbon  on the “Race For The Ribbon” card on September 19. Then depending on how well they exit those preps, either one or both could return for the Cavada which looks to be a contentious affair.

“I would like to keep them apart as long as I can,” Walters said. “They have both enjoyed a lot of success in the allowance conditions and I think they can do well in stakes. But I don’t like running them against one another. There are a lot of good West Virginia-bred mares out there this year. I think six or seven of them could win the Sadie Hawkins and any number of them could win the Cavada and really no one would be surprised any of the results.”