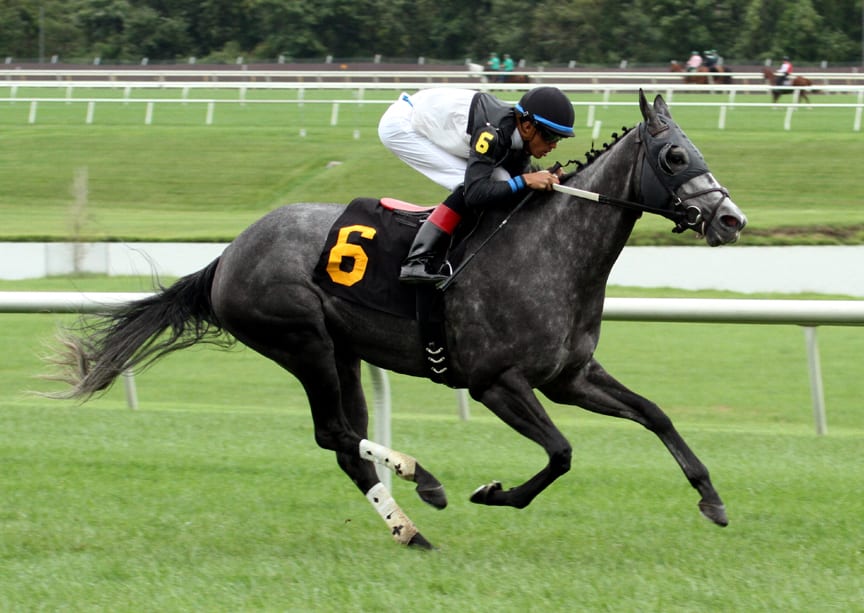 Heaven Knows What won the Oakley at Laurel last year. Under a new proposal, it would be run there again in 2015. Photo by Laurie Asseo.

While racing is being reorganized off the track in Virginia, many of its races may be headed to Maryland this year — including four graded stakes previously run at Colonial Downs.

A proposal approved by the Virginia Racing Commission at its jam-packed July 1 meeting calls for five Virginia-bred stakes and four graded events formerly run at Colonial Downs to be run at Laurel Park over three days during the track’s fall meet.  The proposal will require the agreement of the Maryland Jockey Club, Laurel’s owner.  Because the proposal involves Maryland’s purse account, it will also require approval from the Maryland Thoroughbred Horsemen’s Association and the Maryland Racing Commission.

Largely because of the closing of Colonial, several legislative changes went into effect in Virginia July 1, and it was not a coincidence that the Virginia Racing Commission met on that same day.  Many of the changes are procedural, dealing with the lack of a track licensee and redefining the terms, roles and allocation of funds of the entities remaining to promote, sustain and grow racing in Virginia.

Two workshop sessions were held within the last month to help define the process of the essential task of who represents the horsemen.  That had the Commission well-prepared to identify those entities: the Virginia Horsemen’s Benevolent and Protective Association (HBPA) for thoroughbreds and the Virginia Harness Horsemen’s Association for standardbreds.  Those two groups have represented their respective horsemen since prior to Colonial Downs’s opening in 1996.  During the dispute that began in 2013, Colonial Downs attempted to form its own horsemen’s group while Virginia horsemen began looking for new places to hold racing.

The Commission also identified the Virginia Equine Alliance, a recently formed organization consisting of the Virginia HPBA, the Virginia Thoroughbred Association, the Virginia Harness Horsemen’s Association and the Virginia Gold Cup, as the legislatively mandated nonprofit industry stakeholder.  The designation allows the VEA to receive so-called source market fees from advance deposit wagering.  Those moneys, which were previously received by Colonial Downs for the expense of operating racing, could lead to the reopening of off-track wagering facilities in Virginia.

While several past racing venues have been studied, the focus in recent months has become Morven Park, located just outside of Leesburg, VA.  Morven Park previously held steeplechase events and even offered pari-mutuel racing in its past.  But, racing-wise, it has been dark for over a decade.

Still, the meeting’s biggest news, at least in the immediate term, is likely the proposed shipping of nine stakes races northward, including four graded.

Under the plan endorsed by the Commission, on October 3, the to-be-renamed Virginia Derby (G2), last run in 2013 for $500,000 at a mile and a quarter  on the turf, would run at a mile and a eighth for $400,000. Its filly companion race, the also-to-be-renamed Virginia Oaks (G3), would maintain its $150,000 purse.  It’s widely held that Colonial Downs maintains the naming rights for the Virginia Derby, and possible new names for the races include the Commonwealth Derby and, amusingly, the Colonial Derby.

Shipping the graded stakes to Laurel would be “in a cooperative effort to help Virginia maintain the grades of their current stakes,” according to the Virginia Thoroughbred Association proposal presented to the Commission.  The Virginia Derby and Virginia Oaks were last run on July 13, 2013, on what turned out to be closing day at Colonial Downs.  Those races along with the All Along and the Colonial Turf Cup would lose their graded status if not run this year after not being run in 2014.

The distance changes of the Derby and Turf Cup are necessitated because Laurel’s turf course does not provide for 1 3/16 or 1 1/4 mile distances, but keeping them within one furlong of their prior distance allows this year’s events to be considered in maintaining the races’ grades.

Under the proposal, the combined $900,000 in purses of those graded stakes would be shared by Virginia and Maryland.  Virginia horsemen hope to return those races south of the Potomac soon with their graded status intact.  While gaining acceptance South of the Potomac River, in Maryland the concept is beginning to be vetted.

“It gives you credibility,” added VTA Executive Director Debbie Easter after the meeting.  “Our number of racing days is going to be limited, so we want to be able to feature good quality on those days.  These races will be the cornerstone of those days, the pinnacle, and we can work down from there.”

The Commission also approved the running of Virginia-bred stakes at Laurel for a second year, slated for Saturday, September 26.   Those Virginia-bred races consist of the Jamestown, the Oakley, the Brookmeade, the Punch Line and the Bert Allen Stakes.

Under the proposal, the VEA would provide the purses for the events.  Unlike last year, when Maryland interests retained all of the takeout from the handle, under the plan approved yesterday, “the horsemen’s share of the pari-mutuel wagering on these events will also be the property of the VA horsemen.”

That provision requires the support of Maryland interests.

“It shows that a cooperative environment can work between states,” elaborated Easter, acknowledging the difficult time of racing in Virginia.  “Isn’t it better when states help each other versus working against each other?”