At Penn National, a strike, but the show goes on 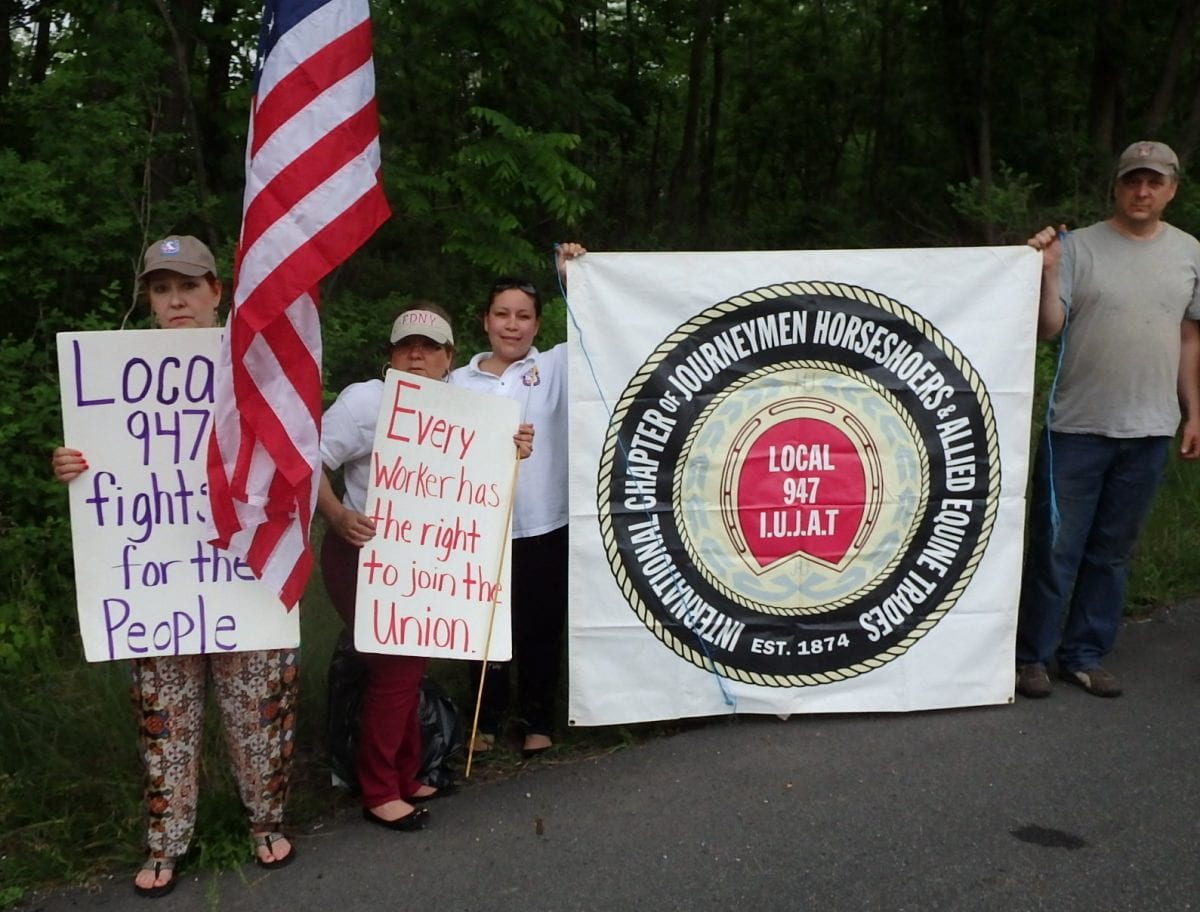 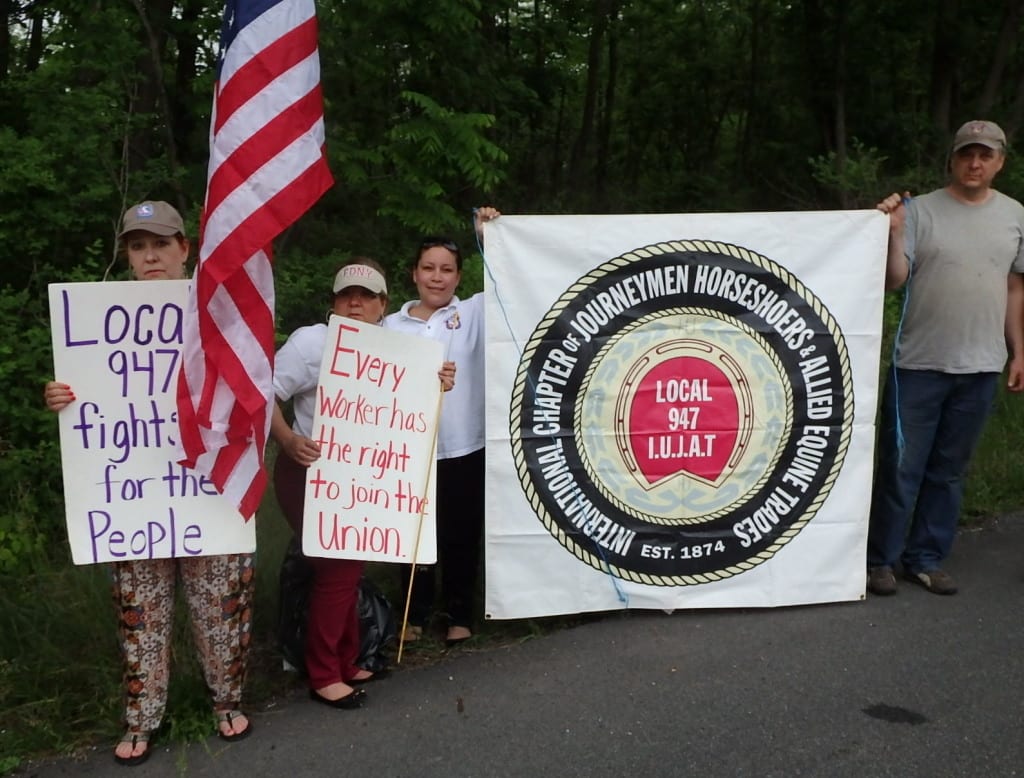 Strikers outside the entrance to Penn National Saturday evening. Photo by The Racing Biz.

The men pressed forward eagerly. They had stories to tell, grievances to share.

“And our PTO (paid time off),” added another.

“I’ve lost my vehicle,” another complained.

A fourth man twisted to the side to reveal his ribs, a demonstration of what he said were the unsafe conditions his employer allowed to persist. “This is from a horse kicking me where the body armor we wear didn’t stay and cracked three of my ribs,” he said.

“It’s very dangerous, and we deserve to get more pay for doing it,” said yet another. “And we put our lives on the line to keep that business running.”

But a clutch of valets, farriers, and members of the track’s gate crew were in a parking lot a couple of hundred yards from the entrance to the facility, They were holding signs – United we stand! Give the workers a fair contract! – while standing beneath a giant inflatable rat.

Cars passing by honked in solidarity.

If all went according to plan, either Penn National would sign a memorandum of agreement with the men regarding a new contract – or racing would grind to a halt on the biggest night of the year.

“Penn National management has not negotiated in good faith,” said Lynn Boeckelmann, demonstrating with the strikers. She said that she was also a trainer. “Consequently they took a vote this week and voted to strike as a result of that.”

The strikers’ issues were many: pay, hours, safety, health care.

“These people were grandfathered in to have healthcare benefits,” added Gloria Larrondo, president of Local 947 of the International Union of Journeyman and Allied Trades, the union which since February has been representing the workers through the International Chapter of Journeymen Horseshoers and Allied Equine Trades. “They [Penn National] want to take that out. They’re just doing that to undermine the union.”

As a result, Larrondo said, the strike was not an economic strike but an unfair labor practices action the union had taken to protest what it said were anti-union steps taken by the company.

“They don’t want to give anything,” explained Larrondo. “They just want to take away.”

Underlying all of that was something else, something that in its way seemed to animate the men equally strongly: a sense of being undervalued.

“They don’t care about people,” said one man. “It got worse and it keeps getting worse.”

Larrondo was confident that her people were taking the right course of action by sitting out the track’s most important night, thus, she hoped, forcing the company’s hand.

“If they [Penn National] get the inexperienced people to do the work that they don’t know how to do [instead of the picketing workers],” she said, “the jockeys are not going to risk themselves and the horses for that. That’s a horror show.”

One man called up the track video feed on his phone. “They just announced it’s been delayed because of thunderstorms,” he said, to the derisive laughter of his colleagues. A light rain fell, but spirits were high, and there were no thunderstorms in the area.

But then the next line: the horses are going to the post. 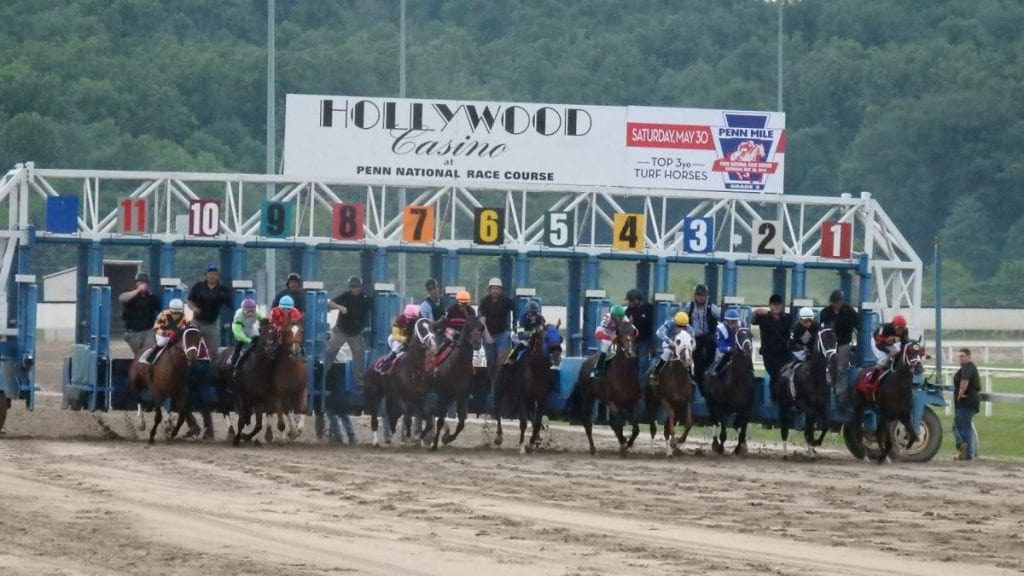 Off in the Mountainview Handicap. The show ran behind schedule – but it did go on. Photo by The Racing Biz.

Back at the track, Chris McErlean, Penn National Gaming Inc.’s vice president of racing, declined to comment other than to acknowledge that negotiations were ongoing and to say that he was “disappointed with the action they [the strikers] took tonight.”

Penn National director of racing Eric Johnston said that the track had cobbled together a gate crew with five regular members of the crew – who, said one striker, were “in the union but not listening to the union” – and several of what he called “gate-experienced guys.”

Johnston said that the jockeys had decided to participate that evening after what he called a “very informal vote.”

“They gathered up in the room, they talked about what they were doing, we told them what we wanted to do,” he said. “Mike Smith was instrumental in helping us make it happen. He said, ‘Hey, let’s watch each other’s back, we’ll make it happen out there, we’ll get it done.’”

The first race was off at 6:06 – six minutes later than originally scheduled – and the track got progressively farther behind. The Penn Mile, slated for a 7:22 post, didn’t go off until 7:48. The evening’s last race was fully 55 minutes behind schedule.

But the races went off smoothly enough, with no unusual gate incidents, and many of them, including the featured Grade 3 Penn Mile, were thrilling.

Even the delays might have worked to management’s advantage. The long gap between 0 minutes to post and the races going off gave bettors more time to get in last-minute wagers. The track set an all-sources handle record of more than $3.8 million.

Among horsemen, sympathy for the strikers seemed to be in short supply. “Ill-advised,” one called their action.

“It’s just unfortunate that they used this opportunity to make a statement,” said the HBPA’s Mostoller, himself an owner. “It would have been a shame [if racing had been canceled Saturday]. It would have been wrong, but we solved the problem, and it was great.”

“We’re only waiting to see justice,” the union’s Larrondo had said early in the evening.

But by 9:30, with the racing card in full swing, the strikers were gone. The parking lot in which they’d demonstrated stood empty. The storms had blown over, leaving a clear and pleasant night in their wake as darkness descended on the fields of central Pennsylvania.