In with the new on Preaknessy Preakness day 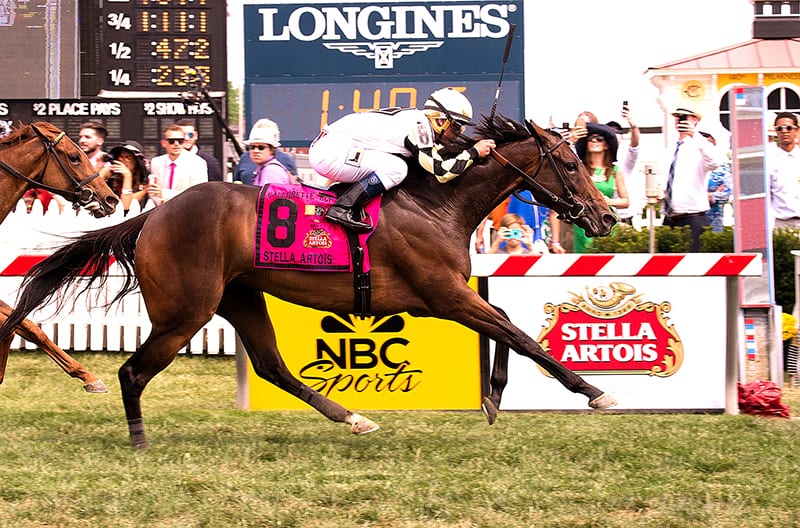 It was a very Preaknessy sort of Preakness day in the first part of Saturday’s monster card at Pimlico Race Course.

In the grandstand, a horseman gave his Form to a program-less out-of towner.  “Happy Preakness,” he wished her as she wandered away.  The swells red-carpeted across the dirt course to their turfside tents.

A vendor picked a familiar face out of the sea of strangers washing by.  “You look nice,” she called.

A man in a Maryland flag suit… well, he just existed, as did his suit.  But that was enough.

Welcome to Baltimore, hon, where high- and low-brow share an easy coexistence.

On the racetrack, meanwhile, it was mostly an in-with-the-new-sort of day through the first 10 races.  Three of the first five stakes races were won by horses registering their first career stakes win.

The biggest of those belonged to Sandbar, who scored in the six-furlong Grade 3 Maryland Sprint Handicap, running down defending champ Happy My Way in the late stages to win by three parts of a length.  It was the first graded stakes win for trainer Joe Sharp — perhaps better known in these parts as former jockey Rosie Napranik’s husband — as well as the first stakes win for the horse.

“Hats off to horse and rider,” said Sharp. [Owner] “Mr. (Ken) Ramsey and I claimed the horse last fall. They can get good and progress steadily and he has. We’ve believed in him all along.”

One race earlier, in the James Murphy Stakes for three-year-olds on the lawn, another horse getting good also registered his first stakes win.  Woodwin W, a Jamie Ness trainee owned by Woody Weeks and ridden by Jevian Toledo, ran his career record to a perfect four-for-four with a three-quarters of a length win.

Only once in those four races has Woodwin W been the favorite (and that was at a lukewarm 5-2).  Today he was the 7-2 third choice in the field of 8.

“We were pretty confident coming into the race,” said Ness.  “I told him to keep him close up and if he didn’t do well it would be my fault.”

Speaking of in-with-the-new, Ness added, “This is the first horse for these owners and they came up from Florida to see today’s race.”

In the other graded event through 10 races, Watsdachances, who had won three of her first four races but only one of 11 since, rallied on the outside to score a one-length win in the grassy, 1 1/16 mile Grade 3 Gallorette  for fillies and mares.  Away since a fourth-place finish in last year’s Grade 1 Flower Bowl, Watsdachances, who had just missed in this event a year ago, won for the fifth time in her career and pushed her earnings past $700,000.

Jockey Javier Castellano explained, “I think I put her in a good spot in the middle to give me a good run and she did. She did excellent today and she galloped out beautiful.”