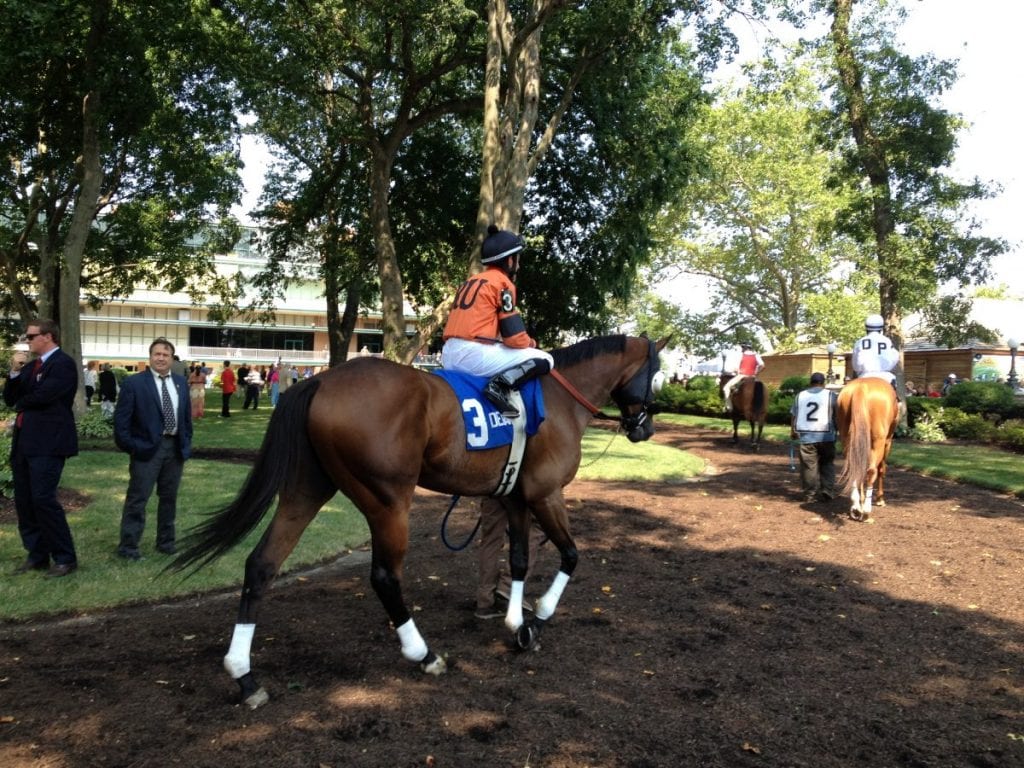 Mid-Atlantic horseplayers, take note! Those of you who have found your wagering opportunities on races at Delaware Park dwindling in recent years due to small field sizes and an overall decline in the quality of the racing program would do well to put the oval back on your list of playable options.

This season, with an influx of new stables from the Northeast and Florida and the addition of several high profile trainers, Delaware Park looks like it may have what it takes offer the bettor a more attractive betting product. With more than 1100 horses already on the grounds, the track should be able to offer cards that feature bigger fields and more competitive racing from top to bottom on the class ladder. And with stables like those of H. Graham Motion, Larry Jones, and Jonathan Sheppard racing here again this summer and fall, you never know when you may get the chance to see a future star take its first step at the launching pad for great ones

Delaware Park’s director of racing, John Mooney worked hard during the off season, visiting horseman at different tracks pitching the advantages of racing at Delaware Park. He spent much of that his time in Florida. At the track’s annual opening press conference Mooney talked about his travels and his expectations for the upcoming meeting.

“We spent a lot of time in Florida and found there were a number of horsemen who were looking to make changes in their schedules during the summer,” he reported, “Calder’s closing has had a big impact on the business, and a number of outfits are still scrambling to adjust from that. And there are a number of owner-breeders and breeder-trainers from the Ocala area that showed an interest in coming here, people like Galvan Balthazar. These are operations that may not have the stock to go to New York or Jersey but have horses that fit our program and can contribute during the meeting.”

In addition to those people several high profile horsemen will be racing at Delaware full time for the first time, topped by Tom Proctor.

Proctor has more than 1100 career wins and runs an outfit that is comprised mostly of higher quality runners. With a number of well established clients including Glen Hill Farm, Proctor is coming off his best season ever in terms of purse earnings, as his runners in 2014 made more than $4.1 million in earnings. The stable won six graded stakes last season and 12 stakes overall, and he’s off to an even faster start in 2015 with three graded winners and five stakes wins already. He is just one of a number of horsemen who have chosen not to race at Arlington Park this summer, as racing in Illinois faces an uncertain future. Proctor has leased 20 stalls at Fair Hill in additions to those allotted to him at Delaware Park and is expected to run a number of his young runners at the track where 32 graded stakes winners have broken their maidens through the years.

Brian Lynch, the Australian-born horseman who conditioned such standouts as Ginger Brew and Grand Arch, is another notable addition to the lineup. Lynch, who sent out seven graded stakes winners among his nine overall stakes victories in 2014, also had a career best year in earnings as his runners earned more than $4.1 million in purses.

In addition to these high profile stables five outfits who had raced at Suffolk Downs during the summer and fall in the past have moved their operations to Delaware Park. Suffolk Downs closed its doors last fall after 79 years of operation, and while efforts are still underway to save racing in the state of Massachusetts, the outlook is not promising.

Most of the New England outfits are comprised of claiming runners, and Mooney said while every track would like to run allowance, stakes, and maiden special weight races all day long, the lower priced claiming horse is the backbone of most racing programs.

“Just because a race is a claiming race doesn’t mean it can’t be competitive and attractive to the bettor,” Mooney explained, “For that reason we’ve tried to boost our claiming ranks so we can run claiming races that will have bigger fields and will be more evenly matched. We’ve also written the (condition) book so that when a horse goes through its conditions it has to move either up or down the claiming ladder. Having races where horses are moving up or down in class are much more attractive to the handicapper.”

Of course the backbone of the racing program comes from locally based stables and the Delaware Thoroughbred Horsemen’s Association’s president, Michael Gorham, is also optimistic this season will produce an improved product.

“We’re in better shape from a numbers standpoint than last year and have some good horsemen coming here for the first time so we should be able to put on a better show,” Gorham said, “This will be Jed’s (Doro) second year as racing secretary and I’m sure he learned a lot last season. We’re (the horsemen) hopeful we can work with the racing office so we can train and plan to run our horses according to the races posted in the condition book. One of our biggest problems is the races that are written don’t follow a logical time frame. For instance if a race is run a certain date there isn’t another race in that category that comes back in a time slot like three weeks. The race is used, then that condition disappears for a while. I think the biggest complaint I get from our membership involves the inability to be able to count on the races in the condition book. We’ve explained this to Jed and Mr. Mooney and hopefully there will improvement in that area.”

The track has a workable schedule that will offer three day a week racing from Saturday’s opening day through May 30th then a four day a week slate during June, July, and August then back to three days a week for the final three weeks of the meeting that closes on October 17th.

So as Mark Twain once said, “Reports of my death are greatly exaggerated!”

Horseplayers shouldn’t give up on Delaware Park racing just yet.