Big jump in handle and a sun-splashed Black-Eyed Susan 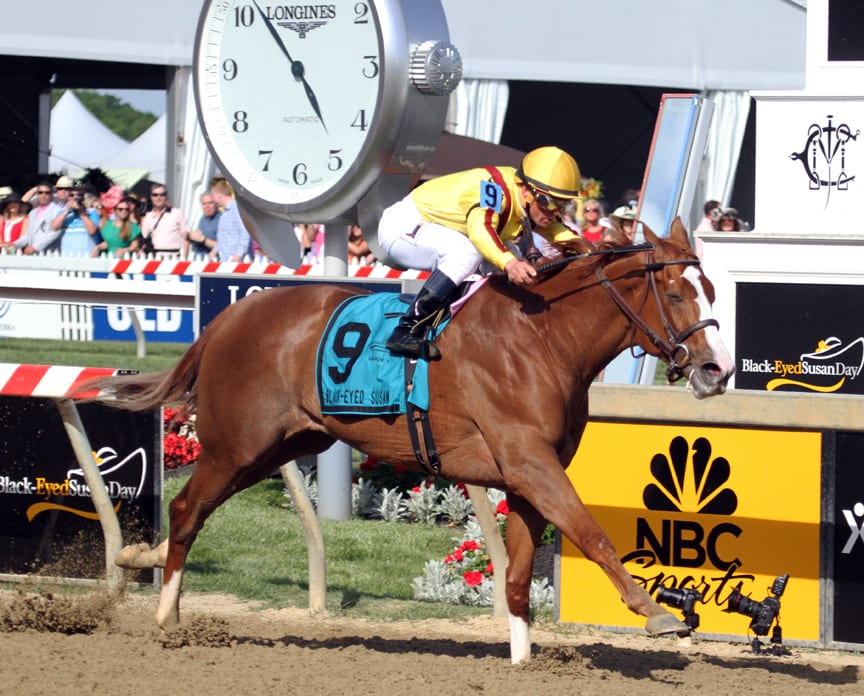 The rains didn’t come on Friday in Baltimore, so the fans did.

Black-Eyed Susan day attendance at Pimlico jumped to 42,700 — up from 34,736 a year ago — and those added fans helped to fuel a 63 percent increase in handle.

The 14-race program, topped by the Grade Black-Eyed Susan Stakes and the Grade 3 Pimlico Special, reached $18.488 million in wagering activity, the Maryland Jockey Club said.  That was well clear of last year’s total of $12.507 million.

Last year’s Black-Eyed Susan day card was decimated by rains which forced all of the scheduled grass races onto the main track.  More than 20 horses scratched as a result, leading to a three-horse race in the Hilltop Stakes and a five-horse field in the Jim McKay Turf Sprint.

Today, those two races had seven and 10 entrants, respectively.

One thing which did not change, however, was the winner of the McKay Turf Sprint.

Nine-year-old Ben’s Cat — the ageless Parker’s Storm Cat gelding bred, owned, and trained by King Leatherbury — ran down Bold Thunder in the last jumps to win by a neck and post his fourth McKay victory.

“In my mind, I thought that we would win, but I wasn’t so sure at the three-sixteenths pole,” said Leatherbury, the octogenarian who finally gained admittance to the National Museum of Racing and Hall of Fame this year. “Then again, when that horse drifted out on us and we had to go inside, it’s always tougher to get through on the inside. But we got there just in time. Just like a Hollywood script would write it.”

Jockey Julian Pimentel, who has ridden Ben’s Cat for much of his career, added, “In the stretch, I really wanted to stay outside, but the leader was getting out. So I said, ‘OK, let’s go inside.’ It’s really unbelievable; he knows where the wire is. Right after we crossed the wire his ears pricked up. He said, ‘I’m done.’”

It was a popular win among fans, who have made Ben’s Cat the most popular Maryland-based runner of the 2010s, and bettors, who sent him off as the 2.10-1 favorite.

“She got away bad and I was a little worried, but when I saw the fast fractions, I figured we would be OK,” said trainer Todd Pletcher, after his filly’s facile four-length score under John Velazquez.

Pletcher enjoyed that experience so much that he returned to the winner’s circle following the day’s last race, the Grade 3 Pimlico Special.

Commissioner, the 1.30-1 favorite in a field depleted to seven by three scratches, moved to command at the quarter-pole and drew off to a three-length win.  Local favorite Page McKenney rallied smartly to be second.

“This was awesome,” exulted Pletcher.  “I’m very happy.  I loved the position he was able to get into.  Once he gets into that rhythm, you can keep on cruising.”

While chalk was served for much of the card, that was not the case in the day’s namesake event, the Grade 2 Black-Eyed Susan.

In that nine-furlong test for sophomore fillies, lightly regarded Keen Pauline (15.40-1) zipped to the early lead, carved out moderate fractions, and drew away nicely to a 2 3/4 length win over late-running Include Betty.

“Yesterday, when I galloped her over this surface, she loved it,” said Tammy Fox, assistant to trainer Dale Romans.  “She loved everything about it.”

Javier Castellano, the jockey whom Fox called “the best of the best,” said it all came down to tactics.  “You have to take advantage when anything happens in a race,” he observed.  “I didn’t expect to be on the lead. I saw a lot of speed in the race. I thought that Martin Garcia on (Luminance) had the speed and was going to dictate the pace. He broke OK and didn’t send his horse to the lead. My horse broke so well out of the gate I dictated the pace and I enjoyed the ride.”

Bob Baffert, the trainer of Luminance, agreed.  “She needed the lead,” he said. “She couldn’t get it, so after that she wasn’t effective at all. We would have preferred to be on the lead.”

Meanwhile, back in the administrative offices, with a big jump in handle in the bank and Preakness day still to come, there were smiles all around.

“Black-Eyed Susan Day was a tremendous success,” said Maryland Jockey Club Vice President and General Manager Sal Sinatra. “From early this morning to this evening, our fans celebrated a great day of racing, the strength and spirit of women, and some amazing performances by our equine and human athletes.  None of this is possible without our great fans, our horsemen, and the City of Baltimore. We look forward to an exciting 140th Preakness Saturday.”