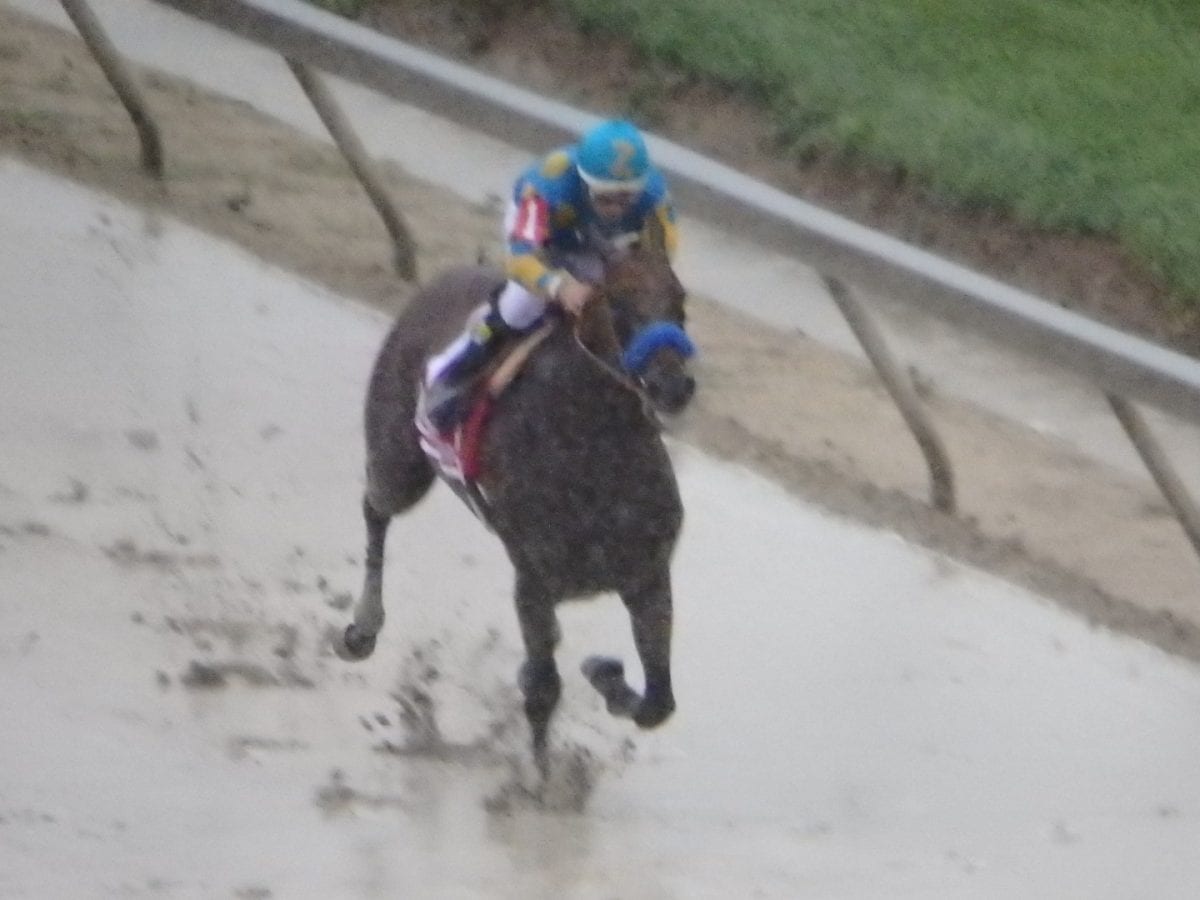 Many old timers don’t remember the Preakness being run under the bizarre, impeding conditions this year’s edition found Saturday evening in Baltimore.  Inside of ten minutes to post, the track was fast and dry yet the skies suggested Biblical gloom.  Then it started to pour and the 140th edition of the Preakness was run under a dark, sloppy “Swimlico”  race course.  The Derby is legendary and the Belmont, the Test of Champions, yet the Preakness has developed its own unique reputation for strange.

Jockey Victor Espinoza knows how the load works from the inside post: your mount gets loaded first and waits through plenty of moving back and forth in the gate.  After they broke Espinoza did all his work prior to the first turn.  Forward and fast was the only way out.

“I have no choice other than to let him run,” said Espinoza.

Breaking from the gate, Espinoza as expected found little racing space but wanted to avoid getting mud kicked in his face.  The Kentucky Derby winner benefitted from Dortmund, his stable mate, unexpectedly dropping back, perhaps to find better going outside, so Espinoza kept his charge ahead.

As they approached the wire the first time, Espinoza looked to his outside and saw Corey Nakatani aboard Mr. Z.   Now with a little bit of room to run, Espinoza wanted more and guided American Pharoah off the rail and began to fend off that challenge.

Trainer Bob Baffert who lamented the draw initially where his interests — Pharoah, owned by Zayat Stables LLC, and Kaleem Shah’s Dortmund — drew the two inside posts, might have relished it after the first turn.

The field hadn’t found the first turn yet when the first thunder clap sounded.  After the field hit the first turn, the pace and the race got easier.  After a 22.90 opening quarter, Espinoza turned the corner and slowed down dramatically, each quarter slower than the previous.  Inside the last quarter, he could choose his margin, called seven lengths over Tale of Verve with Divining Rod third.  The timer stopped at 1:58.46.  It was the slowest running of the Middle Jewel since 1956 — but also tied for the sixth-largest margin of victory.

As he had done in his first race of the year, the Rebel Stakes at Oaklawn Park, American Pharoah won in the slop.  According to Baffert, he had to avoid a river that had formed in the middle of the track.  He mastered water from below and water from above.

“He skips through anything,” said Baffert, a comment about American Pharoah’s gait repeated throughout the week at Baltimore.

Claps of thunder turned to applause, though American Pharoah heard little of it.  Baffert has placed ear plugs on his and was worried that they might be soaked.

“He is the sweetest horse of this caliber that I’ve ever been around,” said Baffert.  “I mean, you feed him carrots, and he’s like a pet.”

He also may be one of the smartest.