For Trevor McCarthy, “just another race to win” 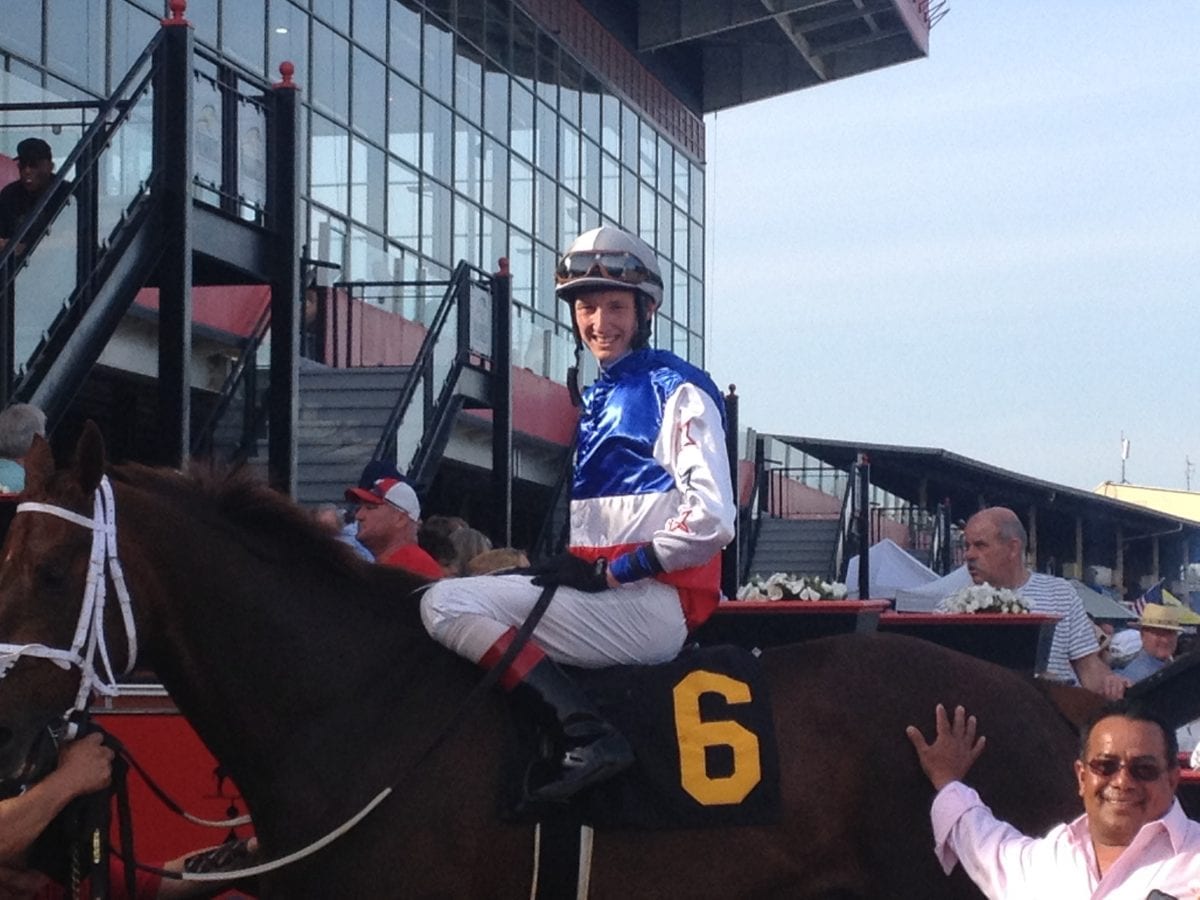 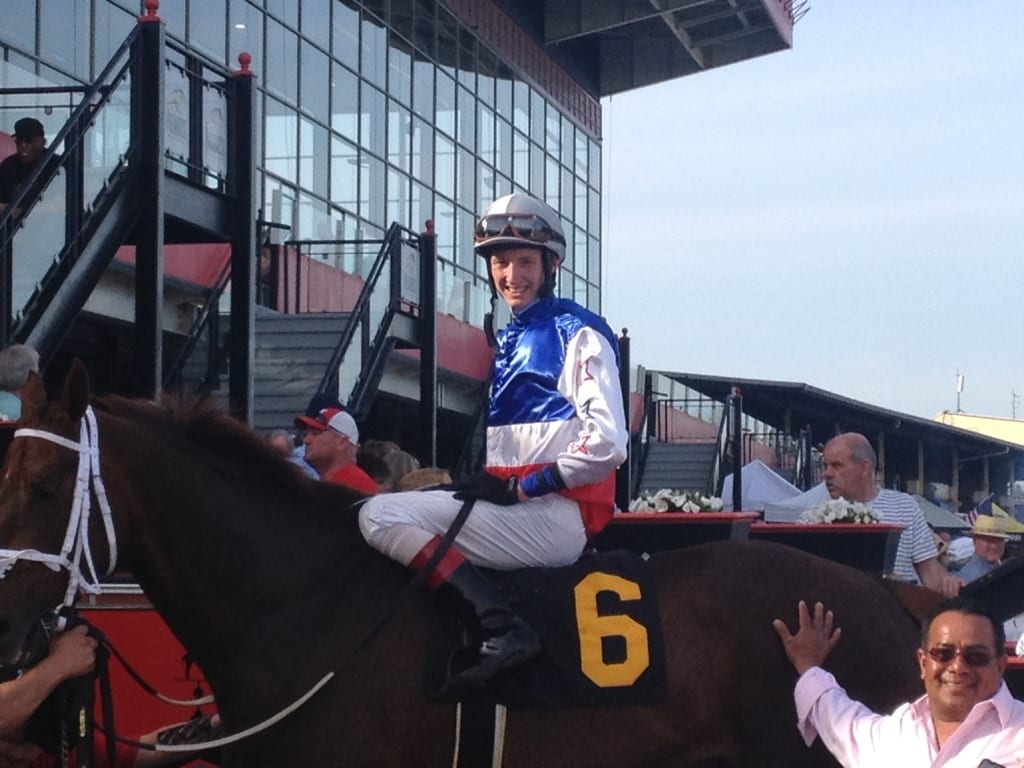 Come this Saturday, when a substantial portion of the 21-year-olds in metropolitan Baltimore will be mugs-in-hand, in the midst of getting their Preak on at Old Hilltop, another of their generation will also be at Pimlico, but in a very different capacity.

Jockey Trevor McCarthy — currently leading the track’s rider standings with 25 victories during the spring meet — will head out to Old Hilltop with a very different goal in mind: winning the Preakness.

The rider, who will turn 21 on Saturday, will get a leg up in the Preakness for the very first time in his young career, aboard certain longshot Bodhisattva.

Certainly, when it comes to getting a Preakness mount, good fortune comes into play.

McCarthy and Bodhisattva — the Jose Corrales trainee who won the last local Preakness prep, the Federico Tesio Stakes, last month at Pimlico — only teamed up two races ago, in the horse’s tenth career start.  That day, in Laurel’s 1 1/8 mile Private Terms, they vainly chased loose-on-the-lead Bridget’s Big Luvy, who won by 2 1/2 lengths, with Bodhisattva holding second.

“He was very green in the Private Terms,” McCarthy said.

Bodhisattva had it his own way for much of the Tesio, carving out moderate fractions of 49 seconds flat and 1:13 3/5 for the half and three-quarters.  But rounding the turn, he appeared to be dead when rival Noteworthy Peach looped outside him and forged ahead.

Then, under a vigorous ride from McCarthy, Bodhisattva surged back and ultimately drew off to a 1 1/2-length win.

“He really surprised me in the Tesio with how much he handled there,” McCarthy recalled.  “I kinda thought he was going to throw in the towel. I got into him, and he really fought back. I was really proud of him that day.”

It was a big effort for a horse clearly still on the improve, a California-bred so lightly regarded by breeder Andy Stronach that he gave the horse to Corrales, the 55-year-old card of a trainer, who is somewhat lightly regarded himself.

“When he gets older, he’s going to say, I rode my first Preakness for unknown trainer Jose Corrales,” Corrales predicted.

Still, it’s one thing to chase Bridget’s Big Luvy — who followed his Private Terms win with a last-place finish behind subsequent Kentucky Derby winner American Pharoah in the Grade 1 Arkansas Derby — and quite another to go head-to-head with American Pharoah himself.

McCarthy’s aware of that, of course.

And yet, the jockey cites reasons he thinks his horse could make some noise.

“He’s done a lot of growing up,” McCarthy said.  “Jose’s got him where he wants him.  He’s more aggressive now than he was.”

Still, it’s going to be…

“One big thing is, he’s going to love the distance,” McCarthy added.  “All we have to do is have some luck.”

The son of Student Council has raced around two turns four times, winning twice and finishing second once.  Toss his fifth-place finish — at 114-1 — in the Grade 2 Remsen last November, in which Derby fourth-place finisher Frosted ran second, and you have a solid resume for the task at hand.

Still, you say, that last work, a sluggish five furlongs in 1:04…

“I thought that was a great work for him,” McCarthy countered. “He was really on the muscle and in the bit.  He’s very sharp right now.”

And that points to the other factors — besides luck — that gets a relative newcomer like Trevor McCarthy into the middle jewel: he’s prepared.

McCarthy said he hasn’t really spoken much with his counterparts in the jockeys’ room.  But he has spent time watching past Preaknesses.

“Just a lot of studying,” he said.  “Year by year I kept going back to see how the horses won the Preakness.”

“We want to be in a forward position,” he said.  “A lot of the winners were forwardly placed.”

Bodhisattva has been first or second at each of the first three calls in each of his last three races.

Corrales, for one, is impressed by McCarthy.

“This horse ran very good for this kid,” Corrales said.  “He knows the track.”

Corrales, a former rider himself, said that “of course, other people wanted to get on the ride.”  But he said that in his riding days, he had found himself removed from a horse with whom he’d successfully teamed.  “It’s not decent,” he said.

Corrales sings the praises of the youngster about to pilot his first Preakness runner.  “He’s a young kid but he’s a complete rider,” the conditioner said.  “He will be in the Hall of Fame. That kid will be as good as anybody.”

“I think it’s a great thing for him,” adds McCarthy’s agent, Scott Silver.  “It’s his birthday, he’ll have a whole bunch of mounts, and he’s going to ride in the Preakness.  I think it’ll be awesome.”

It’s heady stuff, indeed, but McCarthy’s not looking too far ahead.

“It would mean the world to me, my family, my agent,” he explained.  “But I don’t even think I’m going to have a drink.  I have to ride at Monmouth the next day.  I look at it as just another race to win.”