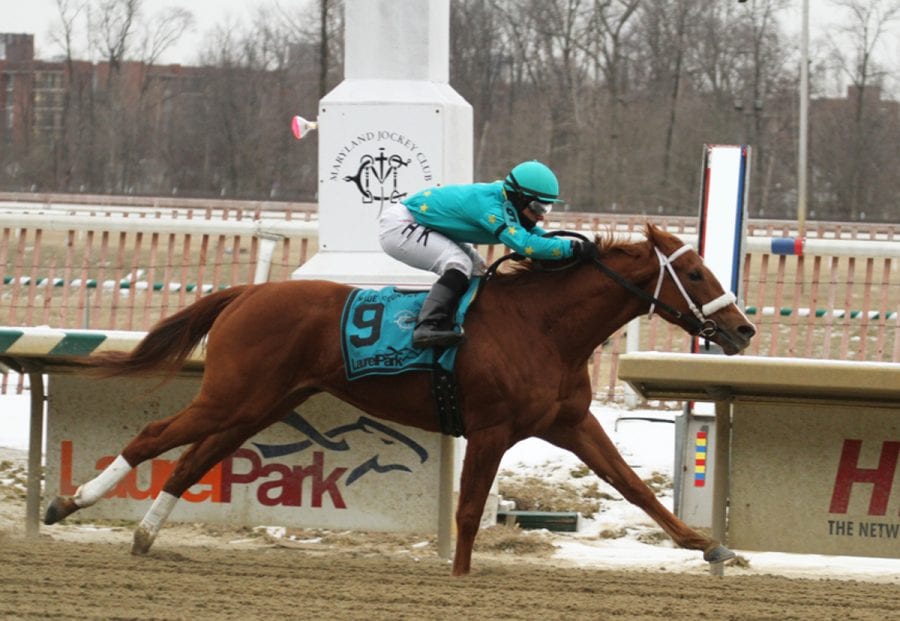 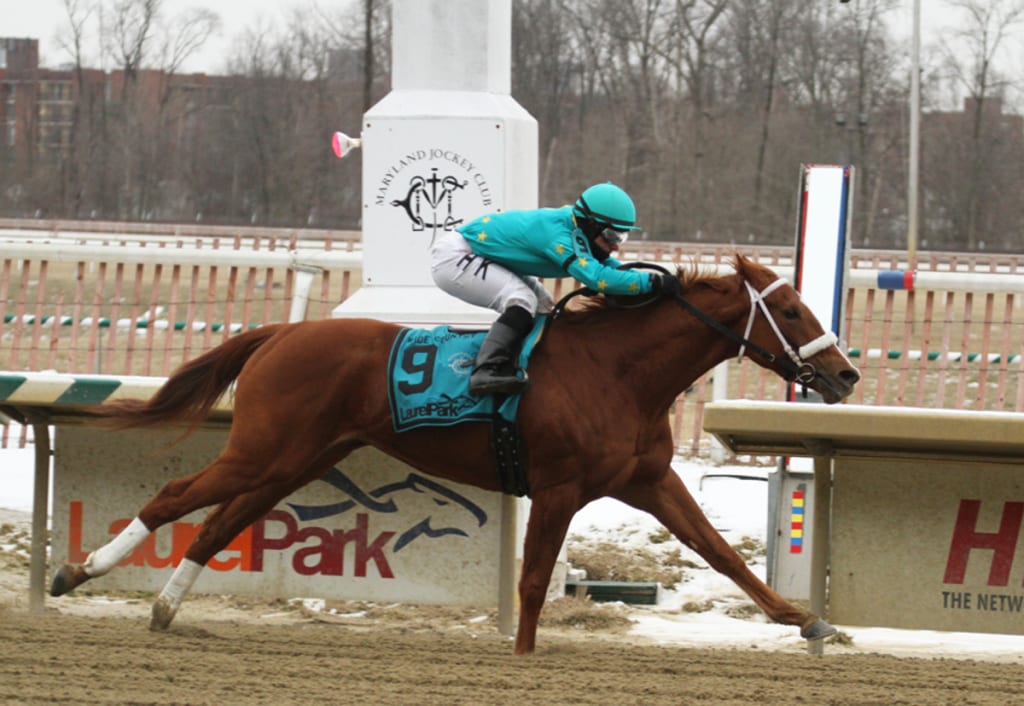 Gypsy Judy rolled to victory in the Wide Country at Laurel Park. Photo by Laurie Asseo.

Though she entered James Hibbert’s homebred Gypsy Judy in a pair of stakes on Friday at Pimlico Race Course, trainer Robin Graham only had one race in mind.

As part of the day Pimlico is also hosting the Ultimate Girls Day Out with several events dedicated to the spirit and strength of women.

Winner of the seven-furlong Wide Country Stakes Feb. 16 at Laurel, Gypsy Judy will be making her graded debut in the Black-Eyed Susan. She was cross-entered in the $100,000 Hilltop, also for sophomore fillies, going 1 1/16 miles on the grass.

In her most recent start, Gypsy Judy ran third behind Grade 1 winner By the Moon in the one-mile Caesar’s Wish Stakes March 21 at Laurel. She didn’t make her career debut until Nov. 20, when she was beaten a neck by Spotted Heart in a Laurel maiden special at six furlongs, with Stellar Wind another half-length back in third.

Spotted Heart went on to win the Maryland Juvenile Filly Championship Stakes and Stellar Wind has become a multiple-graded stakes winner, including the Santa Anita Oaks (G1) April 4. Second in that race was Luminance, the 9-5 program favorite for the Black-Eyed Susan. Gypsy Judy is listed at 20-1 on the morning line.

“We only have to ship 45 minutes up the road and everyone else has to come a lot further,” Graham said. “I don’t know who [the public] will make the favorite but I would think Luminance would be one of the top ones. Stellar Wind beat her in California and we beat Stellar Wind. I know a lot has changed since they were babies and first-time starters but, still, it doesn’t look totally ridiculous to try it.”

Graham has two other horses to run in Black-Eyed Susan Day stakes. Xmas Sky (20-1), a half-brother to Gypsy Judy, will take on Maryland-bred multiple-graded stakes winner Ben’s Cat in the $100,000 Jim McKay Turf Sprint, while Lady Sabelia is the even-money morning-line favorite in the $100,000 Skipat.

The McKay is a five-furlong turf sprint for 3-year-olds and up. The Skipat is for fillies and mares going six furlongs on the main track.

“Having horses to run on that kind of day is really great,” Graham said.

Mrs. Frank P. Wright’s Lady Sabelia had a four-race win streak snapped in the Madison (G1) April 4 at Keeneland, setting a blazing early pace and fading to sixth. She won three straight stakes prior to that, capped by a front-running 1 ½-length victory in the Feb. 14 Barbara Fritchie (G2).

“She’s just really an honest mare. She’s got a ton of class and when you ask her to run, she runs,” Graham said. “She’s got enough natural speed to run three-quarters without having to rush. If a horse gets out real fast and wants to open up, that’s fine. She can sit back and wait. She’s doing great.”

Another Hibbert homebred, Xmas Sky was most recently fifth behind multiple stakes winner Page McKenney in the First Responder Stakes in October at Parx. He cuts back to a sprint for the first time since last May in his 6-year-old debut.

“When he first started running he was originally running five-eighths all the time. I figured it wasn’t a bad distance to try him,” Graham said. “I’d have to train him another month to go a mile and a sixteenth. He’d have to run against those same horses if it was an allowance race, so we figured we may as well go ahead and run that day, see if he can pick up a check and help contribute to the day.”