For Page McKenney’s owner, Pimlico Special’s “one I really want” 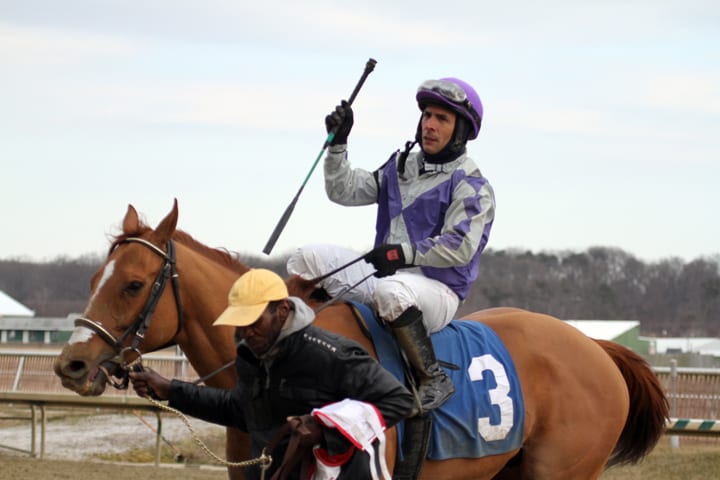 As a poker dealer at the Monte Carlo Resort and Casino in Las Vegas, Adam Staple knows gambling. Nearly two summers ago he took a big gamble of his own, and the investment has continued to pay off.

Former director of stallion season shares at William Schettine’s Signature Stallions in Ocala, Fla., the 47-year-old Manhattan native had been out of racing for close to a decade when he spent $16,000 to claim a non-descript Pennsylvania-bred gelding with one win from 14 career starts out of a sixth-place finish at Penn National.

Now 5, Page McKenney has run worse than third only twice in 20 subsequent starts with 10 wins, six seconds, two thirds and $622,060 in purse earnings. Four of those wins have come in stakes, two of them at Laurel Park to kick off the year, and most recently he was third in the $1.5 million Charles Town Classic (G2) in his graded debut.

“It’s been the ride of a lifetime,” Staple said. “I’d been doing more of the breeding side of it down in Florida and never got that serious into racing. It was always that we were just trying to move horses on to people who were doing bigger things. We had a couple that we raced but nothing along the lines of this. This has just been insane.”

The 1 3/16-mile Pimlico Special is one of eight stakes, four of them graded, on the Black-Eyed Susan Day program at Pimlico that also features the Ultimate Girls Day Out, with several events dedicated to the spirit and strength of women.

“I looked at the last few years of the Pimlico Special and it just seemed so disappointing that no true local horses took a shot in there,” Staple said. “We took a shot at Charles Town, and everybody thought we were insane for doing that. I kept telling Mary, the Pimlico Special is the one I really want. So, let’s design a schedule to make that work.”

The schedule included taking on multiple Grade 1 winner Shared Belief, the 2-year-old male champion of 2013, at Charles Town, a six-furlong bullring track in West Virginia just an hour from Pimlico.

Under jockey Horatio Karamanos, Page McKenney ran out of room in the short stretch but closed to be third, 4 ½ lengths behind winner Moreno and 2 ½ in back of runner-up Imperative. He earned $142,000 for his effort, the biggest paycheck of his career.

“I wanted to pick a race that would set him up for Pimlico, and to be honest, Charles Town was the only one that made sense,” Staple said. “I kept saying I think we can get a third there. I thought Shared Belief would scare enough decent horses away that we could sneak in for third. If Imperative doesn’t cut the corner the way he did and we go five wide on that tight turn, the jockey got off and said if we were on a real racetrack, we run down the second-place horse for sure.”

Page McKenney was bred by Dr. James E. Bryant, an internist, and his wife, Linda P. Davis, who live on a 110-acre farm outside Richmond, Va. He is by Eavesdropper out of the Yarrow Brae mare Winning Grace and named for Davis’ late Aunt Page, combined with a surname from her family tree.

Originally, Page McKenney was with trainer Jazz Napravnik, not breaking his maiden until his 13th try at Colonial Downs in June 2013. Exactly one month later, Staple and Eppler took him out of a $16,000 claiming event going 1 1/16 miles on the turf.

“We did some research on the pedigree. We had to do a little bit of digging, but it turns out this guy’s dam was a full sister to a very nice producer. There’s actually quite a bit of quality in the family there,” Staple said. “We kept thinking he’s a Pennsylvania-bred, how can you go wrong. That was really the angle at the time. We weren’t trying to think there’s a superstar hidden somewhere in there.”

Page McKenney raced one more time for a tag that year, winning at Laurel Park, and has been a model of consistency since. In 2014 he won the Robellino Stakes at Penn National and the First Responder Stakes at Parx, and was second in the Mountaineer Mile, Richard W. Small Stakes at Laurel, set a Parx turf course record for a mile and 70 yards, and capped the year finishing second in the Claiming Crown Jewel at Gulfstream Park.

This year, Page McKenney won the John B. Campbell by a neck as the favorite in February and the Harrison E. Johnson Memorial by four lengths in March, both at Laurel, prior to his run at Charles Town.

After two starts, Staple was contacted by Page McKenney’s breeders and agreed to sell them a share in the horse and have them take the horse back to their farm when his racing career is over.

“I got to talking with Jim a little bit and I said I absolutely have no right to say no to these people. I thought that would be greedy on my part, not that I ever thought this (success) was going to happen. To know that he’s going to be happy and healthy for the rest of his life really means a lot,” Staple said. “I kind of felt it was bad karma to say no, and the racing world is all about karma.”

Though the Pimlico Special represents another step up, Staple believes the time is right to take a shot.

“I just started feeling like we’ve really got to see where we really fit in the big picture on a real racetrack,” he said. “We have the home field advantage, at least. He loves Pimlico. It just seems like it’s the right spot.”