For locals, Preakness “a memory you can’t put a price on”

Bodhisattva and Jose Corrales hope to parlay his win in the Federico Tesio to Preakness glory. Photo by Laurie Asseo.

On April 18, Bodhisattva posted a game length-and-a-half score over Noteworthy Peach to win Pimlico’s Federico Tesio Stakes. That win — a mild 4-1 upset — will, if all goes to plan, put him in the company of a bevy of local runners who went on to make their next starts in the Grade 1 Preakness after winning the Tesio.

In the two weeks between the Kentucky Derby and Preakness a number of “new shooters,” horses that skipped the Derby but come to Baltimore, usually work their way into the headlines. While some may be high-profile sorts likely to warrant the handicapper’s attention — for example, Divining Rod, who won the Grade 3 Lexington in his last start — several of the others are usually tossed aside. Bodhisattva has done little in his career to indicate that he belongs facing Grade 1 company.

In fact, Bodhisattva, a California-bred colt by Student Council out of the unraced Talk Is Money mare Dr. Cheryl P., was a gift from breeder Andy Stronach to owner-trainer Jose Corrales. Bodhisattva took four tries to break his maiden and hadn’t won a stake until his Tesio score. But Corrales has gained increased optimism in his colt’s ability in the weeks since he captured the Tesio.

“I know a lot of people might not think he has a shot,” Corrales said of Bodhisattva, a Student Council colt who has won once in four starts this year and three times in 11 career outings. “But I think he deserves to be in there. How many times does a small-time trainer like myself get a chance to run  a horse in the Preakness? He’s been doing great since he won the Tesio. A lot of the top horses from the Derby have already had tough campaigns. They’re all really nice horses. But at some point some of those harder races start to catch up to them. My horse is coming into the race perfect and he’s had a win over the track, which has to mean something.”

Bodhisattva will need a lot to go right to be a factor in the Preakness, but there’s precedent for a Tesio winner posting a big Preakness effort. Most recently, Graham Motion trainee Icabad Crane won the Tesio, then ran third (at 22-1) to Big Brown in the ’08 Middle Jewel.

And two Tesio runners in the last 20 years nearly stole Maryland’s biggest race. Oliver’s Twist used a win in the Tesio as a springboard to a second-place finish behind Timber Country in the 1995 Preakness, and Magic Weisner, conditioned by the late Nancy Alberts, rebounded from a second-place finish in the Tesio to run a fast-closing second (at 45-1) to War Emblem in the 2002 Preakness.

“I know the top three horses from the Derby are coming and they’re very good horses,” Corrales said. “Not too many people are going to give my horse a second look. But anything can happen in a horse race. There are big upsets that happen every day. I’m not saying my horse is going to win, but he deserves a shot in there.”

Trainer Bill Boniface certainly knows about horses that deserve a shot — and about what it takes to win a Preakness, having saddled Deputed Testamony to capture the blanket of Black-Eyed Susans in 1983. But Deputed Testamony — who was himself a Tesio winner — had also run in the Grade 1 Bluegrass that year and had also won stakes at the Meadowlands and at Keystone. In fact, Deputed had initially been pointed for the Kentucky Derby, only to miss that race with a mild illness.

A dozen years later, Boniface nearly captured the Preakness again with Oliver’s Twist, a Maryland-bred product who had not won outside of his home state and whose two forays into graded prep races had indicated that he was not competitive with the best of his generation. Overlooked at 25-1 on Preakness Day, Oliver’s Twist finished a game second to Timber Country.

“Going into that race, I knew Oliver’s Twist was doing great,” Boniface said. “In fact, I told our rider [Alberto Delgado] that all he needed was a good ride and he could win it. Well, we had a little bit of bad luck in the race and Albert got boxed in and got out a little bit too late. In fact, the next day there was a quote from [former jockey] Eddie Arcaro in one of the papers stating that the best horse did not win the Preakness. I know he was referring to my horse. He was just unlucky. But he ran well and I can understand that any local trainer would want to take a shot at the Preakness after winning the Tesio. I still can’t believe Deputed Testamony is the last Maryland-bred to win the race. We’ve bred a lot of really good horses since then.”

Trainer Chris Grove saddled horses in the Preakness Stakes in consecutive years earlier this decade; both Norman Asbjornson and Pretension finished 11th. Pretension went into the race off a determined win in the Canonero II — which took the Tesio’s place for a single year and was contested under the same conditions and on the same date.

Running in the Preakness, Grove said, had plenty of sentimental value. It was the first and only Preakness starter for longtime owner, Arthur Kidwell, who passed away the following winter. And it allowed Grove’s oldest son, Noah, a chance to walk the horse from the stakes barn over to the traditional saddling area on the turf course.

Grove continued, “There is a lot of tradition in Maryland racing and any local trainer dreams of running a horse in the Preakness. It was a great day for me, because my son Noah walked the horse over from the stakes barn to the turf course. It was one of those memories that you cannot put a price on.” 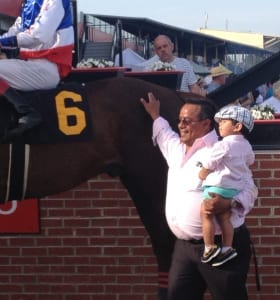 Longtime local trainer Eddie Gaudet sent Concealed Identity to the Preakness Stakes following the gelding’s win in the Tesio, marking the first and only time in his 60-year career as a conditioner that he would saddle a horse in the middle jewel of the Triple Crown. Trainer Gary Capuano, who sent out Captain Bodgit to a third-place finish in the Preakness after the Saint Ballado colt had run second as the favorite in the Derby, later sent out Cherokee’s Boy in the Preakness after that colt had won the Tesio, but he was never a factor in the race. Trainer Linda Albert sent Water Cannon — riding a five-race win streak that included a game Tesio score — to a 10th-place finish in the 2004 Preakness, won by Smarty Jones.

It’s not an easy step.

“Every one of the local trainers who sent a horse to the Preakness probably saw the same thing in their horses that I’ve seen in mine lately,” Corrales said. “If they run a big race in the Tesio and come out of it in good shape and bounce back right away, then you have to take a shot at the Preakness. Not many trainers get that opportunity. I know a lot of people probably thought I died 10 years ago. But on Saturday they’re going to look at the television and see me saddle a horse for the Preakness Stakes and they’ll know I’m alive and doing well.”