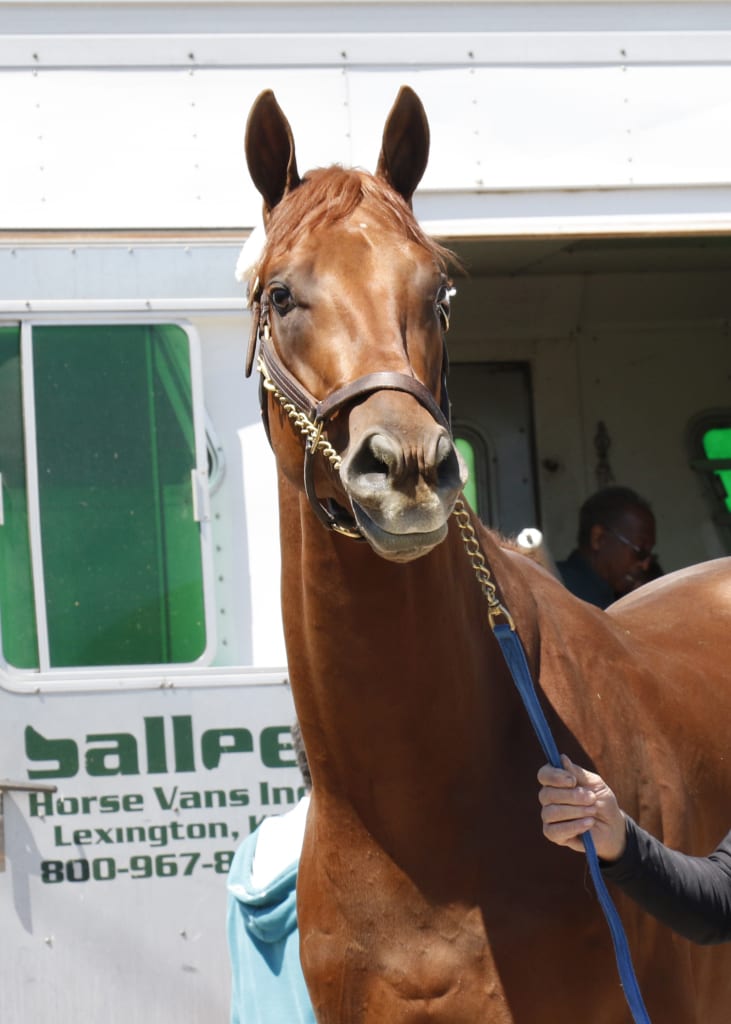 Trainer Dallas Stewart and owner Charles Fipke’s decision on Tale of Verve’s status for the 140th Preakness Stakes (G1) at Pimlico Race Course May 16 will likely rest on their analysis of last Saturday’s Kentucky Derby (G1).

“I talked with the owner last night,” said Stewart, aware that the Middle Jewel of the Triple Crown is likely to attract a number of runners from the Kentucky Derby. “There were a lot of horses that ran bad races (in the Derby) and it wasn’t like they were flying home with the last quarter in :26.”

Tale of Verve, who did not draw into the Derby from the also-eligible list, galloped 1 5/8 miles Friday under exercise rider Cortez Walker.

“The longer the better for him,” Stewart said. “If he doesn’t gallop a long way, he doesn’t get a lot out of it.”

Tale of Verve broke his maiden in his most recent start at the Preakness distance of 1 3/16 miles at Keeneland on April 23 and worked five furlongs at Churchill Downs on Monday.

The top three Kentucky Derby finishers galloped at Churchill Downs Friday morning in preparation for the Preakness Stakes, all three galloping for the first time since last Saturday’s Run for the Roses.

After backtracking to the front side, both Bob Baffert-trained colts galloped 1 3/16 miles a day after having jogged once around the track.

“Everything went very nice and we did exactly what Bob told us to do,” said Jim Barnes, Baffert’s assistant who is overseeing things in Louisville.

“When they walk for four days, they can get a little quiet. You get them back to the track and they begin to wake up,” he added. “We didn’t do much this morning. Normally we gallop a mile and a half and I would imagine we would be back to that distance soon.”

Baffert is scheduled to return to Louisville Sunday night from Southern California.

Firing Line stood with a pony for a few minutes at the six-furlong gap, backtracked to the front side and then galloped 1 ½ miles.

“For the first day, that was a comfortable gallop,” Gomez said of Firing Line who had jogged with a pony the previous two days. “He is the same as he was before the Derby, which is a good sign. He is what I would call scary calm. He is so professional.”

Carlos Santamaria, assistant to trainer Simon Callaghan, was asked what kind of report card he would phone in to Callaghan after Friday’s activity.

“What do you think, Humberto?” Santamaria said. “An A?”

“An A-plus,” Gomez said. “An A-plus for the whole week and for the way he looks.”

No decision has been made regarding a possible work for Firing Line before Wednesday’s scheduled departure to Baltimore. Santamaria said that Callaghan most likely would meet up with his team in Baltimore rather than making a Louisville stop. Callaghan is based at Santa Anita.

Three other Churchill Downs-based horses that have the Preakness under consideration galloped before the morning renovation break.

John Oxley’s Danzig Moon, fifth in the Derby, had William Cano aboard for his morning activity. Norman Casse, assistant to his father, trainer Mark Casse, said no decision on the Preakness had been made.

“I’ll know soon. We are going to ship up there Tuesday,” said Lukas, who plans to take several horses for other stakes next weekend.

Lukas has not confirmed a rider for Mr. Z.  Ramon Vazquez has ridden Mr. Z in his past two starts.

Trainer Todd Pletcher reported Friday morning that there have been no decisions made concerning the Preakness statuses of Materiality, Carpe Diem, Stanford and Competitive Edge. Materiality and Carpe Diem, who finished sixth and 10th, respectively, in the Derby; Stanford, who was scratched from the Derby; and Competitive Edge, the undefeated winner of the Pat Day Mile (G3) on the Derby undercard; are training at Belmont Park.

At Laurel Park, Bodhisattva galloped Friday morning for a scheduled start in the Preakness. The son of Student Council is scheduled for a breeze Sunday morning.

Bodhisattva captured the Federico Tesio Stakes by 1 ½ lengths at Pimlico on April 18.