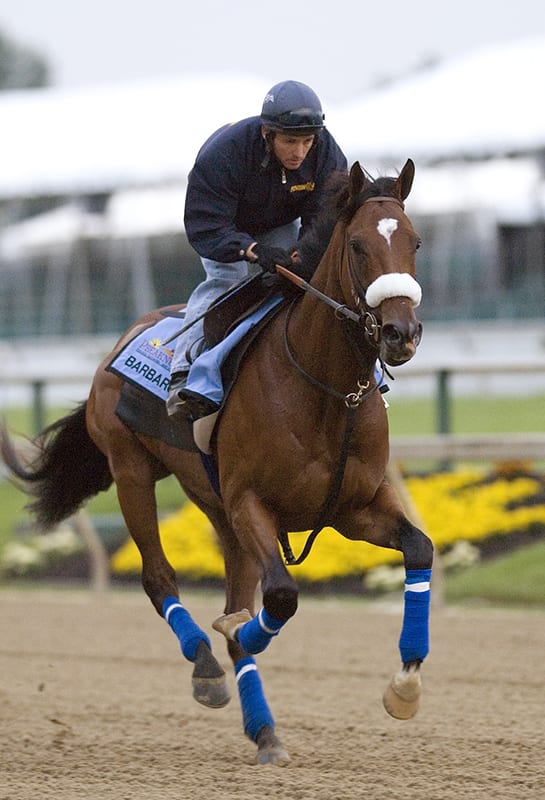 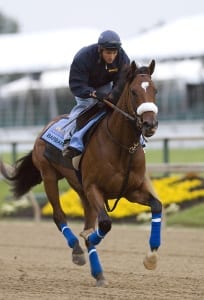 Nine years after the Barbaro heartbreak, Gretchen and Roy Jackson are returning to Pimlico for the 140th Preakness Stakes on May 16 with another homebred colt – Divining Rod – who will run in the colors of their Lael Stables.

Divining Rod, winner of the Lexington Stakes (G3) at Keeneland on April 11, will be the 27th Lael starter at Pimlico Race Course and first Preakness contender since Barbaro suffered catastrophic leg injuries early in the running of the Middle Jewel of the Triple Crown on May 20, 2006.

Barbaro, the decisive winner of the Kentucky Derby, was rushed from Pimlico to the University of Pennsylvania’s New Bolton Center in Kennett Square, Pa. where Dr. Dean Richardson and his team repaired the fractures in his right hind leg. However, the colt developed the hoof disease laminitis during his recovery and was euthanized on Jan. 29, 2007 after veterinarians determined that he could not be saved.

The Jacksons said Thursday they have no misgivings about running Divining Rod in the Preakness.

“We’ve moved on from Barbaro,” Gretchen Jackson said. “Barbaro was deeply loved. I’ll never go through a day probably when I don’t think about him, but this is a new horse, new chapter, new everything. So, I don’t approach it with worry.”

Roy Jackson agreed that he and his wife could not be prisoners to history.

“From my standpoint, and I think Gretchen feels the same way, we were very lucky to have him,” he said. “There were two roads you take. You could sort of sit there and dwell on it and go over and over the thing, or you could go on with life, to better things and happier days. I think we chose to look at the positive and go on with our lives and really haven’t spent a whole lot of time dwelling on the subject.”

Two weeks after Barbaro provided the Jacksons with their greatest success in racing, they were central figures in what became an international story about the valiant effort to save the colt.

“It was incredibly stressful because you second-guessed yourself every morning when you got up or when you saw him,” Gretchen Jackson said. “One day, he was great, and two weeks later, you were considering putting him down. It was a real roller-coaster ride. It was very stressful, being in constant contact with press and people you didn’t know and being asked to deal with facts and deal with emotions all the time. It was hard.”

The Jacksons had nothing but kind words for everyone involved with Barbaro, from those who rushed to his aid at the track to the staff at New Bolton.

“They were fantastic. We wouldn’t do anything different than what was done,” Roy Jackson said.

Due to their many years as breeders and owners, the Jacksons understood that racing’s highs and lows can come in quick succession and were better equipped to face the tragedy.

“We’ve been in it so long, thank God, and we’ve lived with horses on the farm so long that we were somehow baptized into dealing with it,” Gretchen Jackson said. “Not dealing with all the amount of press and attention it got – that was really new for us. But dealing with horses and tragedies, we had some experience with that.”

Roy Jackson said they have fond memories of the public support that flowed to them for Barbaro.

“Going through it, there was so much positive,” he said. “The number of people we heard from – I think we heard from people in every state in the country and 14 foreign countries, and the amount of kids who sent us things was unbelievable. An awful lot of positives came out of the whole thing.”

While Barbaro had a regal air about him, Divining Rod is a character.

“He’s a high-energy horse. If he was a person, you would say he is boisterous,” Gretchen Jackson said. “He puts a lot into everything he does. And he’s very, very high on himself. He likes himself a lot. When he comes out of the gate he just wants to zoom and do everything.”

That need-the-lead running style did not serve him well at Tampa Bay Downs, where he tired to finish second in the Sam F. Davis (G3) and third in the Tampa Bay Derby (G2) for trainer Arnaud Delacour. Without warning, a different more tractable Divining Rod showed up at Keeneland and beat favored Donworth by three lengths.

“The transition that was made in the Lexington was that he didn’t come out of the gate and have to be on the front end, streaking around the racetrack,” she said. “He was able to be brought back and kept close to the pace, but then he ran on and he showed tactical speed. He showed relaxation and a certain maturity. He stunned us all.”

As it turned out, Divining Rod did have enough qualifying points to make the Derby field from the also-eligible list. However, the Jacksons and Delacour had already decided not to run the colt back three weeks after the Lexington triumph and pointed him to the Preakness. The son of Tapit, out of multiple Grade 1 winner Precious Kitten, has been getting ready for the Preakness at the pastoral Fair Hill Training Center in Elkton, Md.

Rachel Alexandra in 2009 is the most recent new shooter to win the Preakness after bypassing the Derby. Gretchen Jackson acknowledged that her colt faces a difficult assignment, but noted that American Pharoah had to work hard to defeat Firing Line and Dortmund in the Derby.

”It’s a good group. It’s tough,” Roy Jackson concurred, “but I think Divining Rod deserves a chance to see if he can compete or not.”