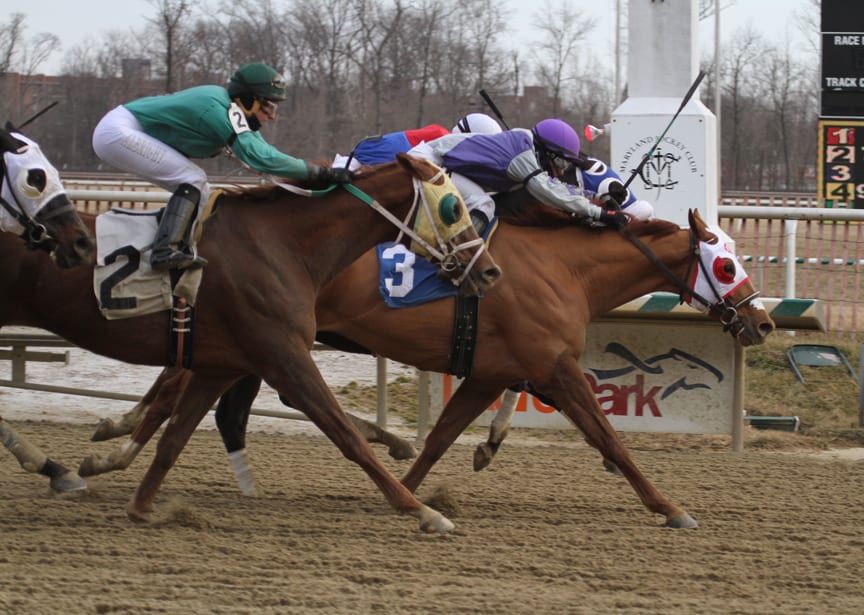 Page McKenney rallied between horses to take the Campbell at Laurel over the winter. Photo by Laurie Asseo.

The work at Pimlico was the first for the 5-year-old Eavesdropper gelding since running third behind Moreno in the $1.5 million Charles Town Classic (G2) April 18.

“He worked great today,” trainer Mary Eppler said. “I just wanted to see that he worked well within himself, and he finished up very strong. He went the last quarter in :25, and that was really asking him.”

The Pimlico Special will be Page McKenney’s second graded-stakes attempt, following his race at Charles Town.

Eppler had cross-entered Page McKenney in the Henry S. Clark at Pimlico, also April 18, with the intention of running him in that race if it came off the grass.

“The Pimlico Special was our goal. We just needed to find a race in that time frame. That’s why we went to the Charles Town Classic,” Eppler said. “I think he ran real hard; the stretch just wasn’t long enough for him. But, he came back and is doing great.”

Multiple stakes-winning Maryland-bred star Ben’s Cat will breeze Saturday morning at Laurel Park in preparation for his next start in the $100,000 Jim McKay Turf Sprint May 15 at Pimlico.

Avon Thorpe, longtime assistant to breeder-owner-trainer and recently elected Hall of Fame horseman King Leatherbury, said Friday that the 9-year-old gelding will go out around 7 a.m.

“He’ll go a half-mile, just something to sharpen him up,” Thorpe said. “He’s doing excellent; couldn’t be better.”

Saturday’s work will be the first for Ben’s Cat since making his 2015 debut April 17 at Pimlico, where he ran second to Bold Thunder in an open $55,000 allowance going five furlongs on the turf.

“He needed the race. We had some days over the winter where we couldn’t train because of the weather, and he was a couple works short,” Thorpe said. “I think he ran awesome, for what it was.”

Named Maryland-bred Horse of the Year for a record fourth consecutive year in 2014, Ben’s Cat has won the Jim McKay three times, including the past two years. Overall, he has 28 wins and more than $2.3 million in purse earnings from 46 starts, including 23 stakes wins, four of them Grade 3 races.

“We always love to see him run. He’s a star,” Thorpe said. “People love him. When we were in Philly, a couple guys came running up and said, ‘I love you, Ben. I go everywhere you go.’ It was funny.”