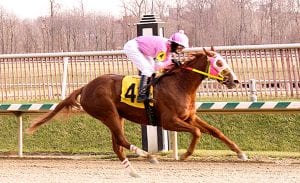 Just a pair of runners bred in the mid-Atlantic are entered in Friday’s major Churchill Downs stakes, but one of them is the favorite in the day’s biggest race.

Virginia-bred Stellar Wind is the morning line 7-2 favorite in the Grade 1 Kentucky Oaks.  The flashy daughter of Curlin, who broke her maiden at Laurel Park before being sold privately to Hronis Racing LLC, enters off a pair of graded wins at Santa Anita, including a facile strike in the Grade 1 Santa Anita Oaks in early April.  Victor Espinoza retains the mount for trainer John Sadler.

Though she’s the chalk, this race is no easy task.  She’ll face a 14-horse field headed by well-regarded I’m a Chatterbox (4-1), who owns three straight stakes scores at Fair Grounds, sweeping that track’s three biggest sophomore filly events.  She won all three — the Silverbulletday, Grade 3 Rachel Alexandra, and Grade 2 Fair Grounds Oaks — by open lengths.  I’m a Chatterbox is winless in two tries over the strip.

Earlier on the card, Pennsylvania-bred Tarpy’s Surprise will try his hand in the Grade 2 Alysheba Stakes.  Though a five-year-old, Tarpy’s Surprise has made just seven starts to date, winning two and finishing in the money four other times.  The son of Into Mischief, bred by Spendthrift Farm LLC, will don blinkers for the first time and have Corey Lanerie in the irons for trainer Dale Romans.

Todd Pletcher trainee Protonico gets the nod as the 7-5 morning line favorite in the Alysheba, having registered triple-digit Beyer speed figures in three of his last four races.  Most recently, he won the Grade 3 Ben Ali at Keeneland, and he ran second in his only try over the Churchill strip, in the Grade 1 Clark.