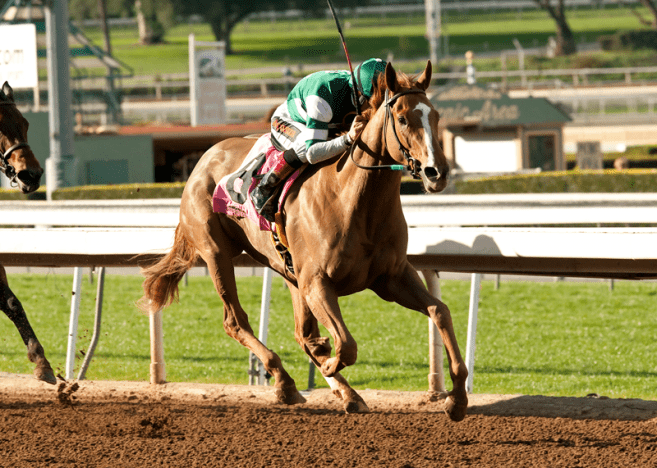 Virginia bred Stellar Wind, a multiple graded stakes winner, is the 7-2 morning line favorite in the 141st Running of the Grade I Longines Kentucky Oaks on May 1st.  Stellar Wind, a daughter of Curlin out of the Malibu Moon mare Evening Star, will break from the 12th post position and face 13 rivals in her first attempt at nine furlongs.

In her last outing in the Grade I Santa Anita Oaks, Stellar Wind won for fun by more than five lengths after bobbling at the start. Although the Oaks will be her longest race thus far, both her breeding and her performance in the Santa Anita Oaks suggest that distance will not be a problem.

Condo Commando, who has won five of six starts, is Stellar Wind’s most serious threat and is 4-1 in the morning line, along with I’m a Chatterbox. Condo Commando is the only competitor in the field to have won at nine furlongs, having won twice in two tries in Grade 2 events. She is a front runner and to date has not shown any ability to rate off the pace. The other most likely front runners early in the race are Sarah Sis at 30-1 and Money’soncharlotte at 50-1, neither of which are likely to be around in the final strides of the race.

I’m a Chatterbox has four wins in six starts including wins in Grade III and Grade II company. She has a versatile style, having won both as a front runner and rating off the pace. Notably, however, her two losses have both come at Churchill, where she has finished no better than third.

Lovely Maria, at 5-1, won the Grade I Ashland at Keeneland earlier this month and has a record of three wins and three places in seven starts. Her only off the board finish was fourth in a minor stakes where the track was rated as muddy. Although a legitimate contender who could certainly take home the prize, she is more likely to get a minor award in the exotics.

Birdatthewire, at 6-1, has had troubled trips in her last three outings but still managed to win two Grade II events and just missed winning a third by a neck. In the Gulfstream Park Oaks in March, she was steadied from the 7/8 to 3/4 pole and won by more than a length. Two races back, in the Grade II Devona Dale, Birdatthewire was bumped at the start and encountered all sorts of trouble before besting 11 of 12 competitors. Similarly, in the Grade II Forward Gal in January, she was again bumped at the start and had to circle five wide before she drew off to win in a field of 11. Birdatthewire will be breaking from the 13th post which may compromise her chances, but if she gets a clean trip, she has the talent to take home the top prize.

Finally, Angela Renee at 15-1 is probably a notch below the other graded winners, with her Grade I coming in September of her two year old season in Santa Anita. She has been beaten by three of her competitors, including Condo Commando and Lovely Maria, and a minor award is mostly likely the best she can do against this field.

Of the remaining field, Include Betty, at 20-1, will be ridden by Rosemary Homemeister, who got her start on the Maryland tracks. Rosemary will become the third female jockey to have had mounts in both the Kentucky Oaks and Derby, following in the footsteps of Julie Krone and Rosie Napravnik.

There is one also eligible in the race, Peace and War, with a dubious morning line of 50 -1 given that she is a Grade I winner of the Alcibiades last October. In that race, the bettors sent her off at 23-1 in a field of 12, where she was off slow, steadied, and still won by half a length on track rated as wet firm. Peace and War’s one start in 2015 was disappointing, finishing last in a field of seven in the Grade I Ashland at Keeneland, where Lovely Maria and Angela Renee finished one-two. However, if she draws into the race, she is worth considering in the exotics given her likely price, especially on an off track.