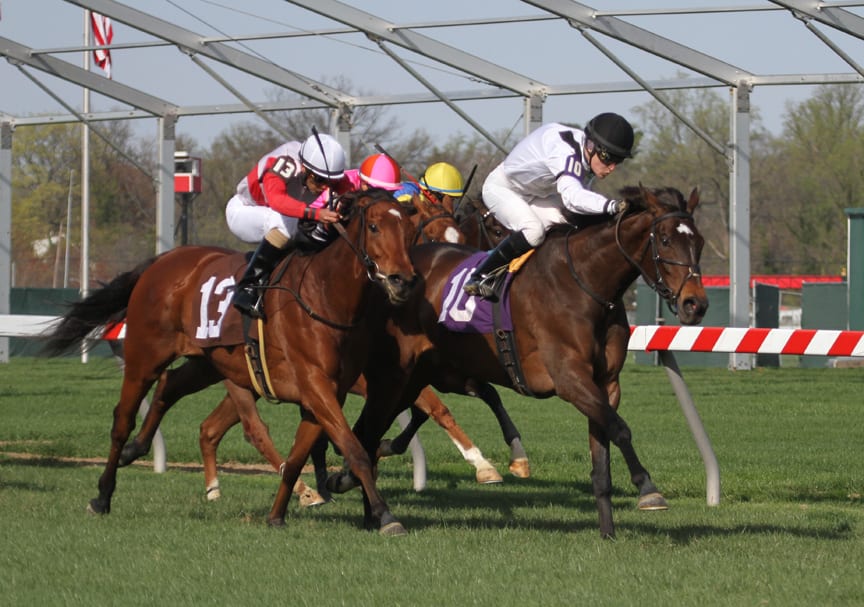 Sycamore Racing’s Nellie Cashman, a graded-stakes winner and multiple graded-stakes placed, gamely held off Stuart Janney III’s Run of the River inside the final 70 yards to win Saturday’s $100,000 Dahlia by a nose while covering a firm mile course in 1:35.95.

Nellie Cashman, a 5-year-old mare by Mineshaft who won the 2013 Virginia Oaks (G3) and placed second in the 2014 Valley View (G3) and third in the 2014 Ballston Spa (G2), was rated off the pacesetter Istanford past fractions of :23.45 and :47.31 before taking the lead entering the stretch and then holding off a late rally by Run of the River.

Trained by Francis Abbott III and ridden by Forest Boyce, Nellie Cashman covered a firm mile course in 1:35.95. The mare shipped to Baltimore from Florida after finishing sixth, beaten five lengths by Sandiva, in the Suwannee River (G3) Feb. 7 at Gulfstream Park.

“We were able to get good position throughout the race, although I had to take the lead a bit earlier than I had planned to, and I’m glad that I did. We just had enough.” Boyce said.

“When you get third at Saratoga in a Grade 2, you feel really good,” Abbott said. “But this winter in Florida she was in some awfully tough company. When Sandiva went to the Honey Ryder, I thought that we should go home and regroup. Hopefully our plan will be ascending the rest of the year. I kind of hope we go back to Saratoga because she really likes to run there.”

Nellie Cashman has won four of 19 starts, four of 14 on the turf.