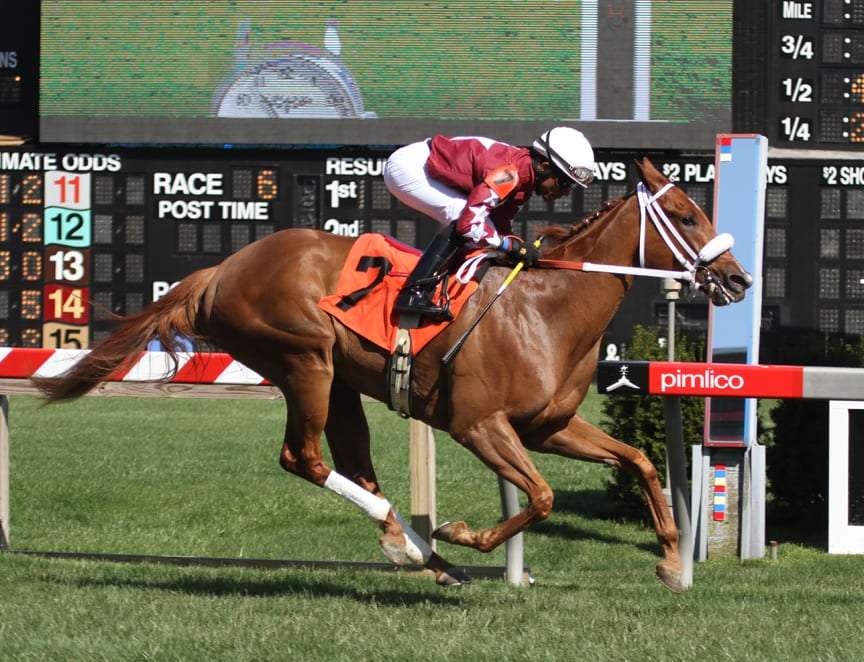 Lady Shipman was super-impressive in the Stormy Blues. Photo by Laurie Asseo.

How good is Lady Shipman?

That was the question everyone asked Saturday afternoon at Pimlico Race Course after Randall E. Lowe’s 3-year-old homebred filly ran away from the competition to win the $100,000 Stormy Blues effortlessly by five lengths while winning her fourth consecutive race and second consecutive stakes race.

“I’ve definitely been blessed with her,” said trainer Kathleen O’Connell, who shipped the daughter of Midshipman to Pimlico from her South Florida base after an eight-length victory Jan. 27 in the OBS Sprint. “She’s a really special filly.”

Ridden by Eduardo Nunez, Lady Shipman dueled through a :21.70 opening quarter with Justlookatmenow before cruising to the lead and then widening her advantage down the stretch. Comforter was second. It was another neck to Harlan’s Honor in third.

“It was a very easy race….we didn’t have any problems at all,” Nunez said.

“She has a penchant for being smart, being calm, and being collected,” O’Connell said. “I shipped her to one of my old friend, Ken Cox, and she stayed in his barn and today everything went according to plan. The plan, like many, is to stretch her out as far as we can go, and I think she can go longer. We’ll look north because that’s a bigger avenue for us to pursue.”

Lowe, who raced the mare, Sumthingtotalkabt, a California-bred daughter of Mutakddim, said, “She gets out there and dares you to try and get by her. It’s a feather in our cap to breed and watch her race. She’s special.”