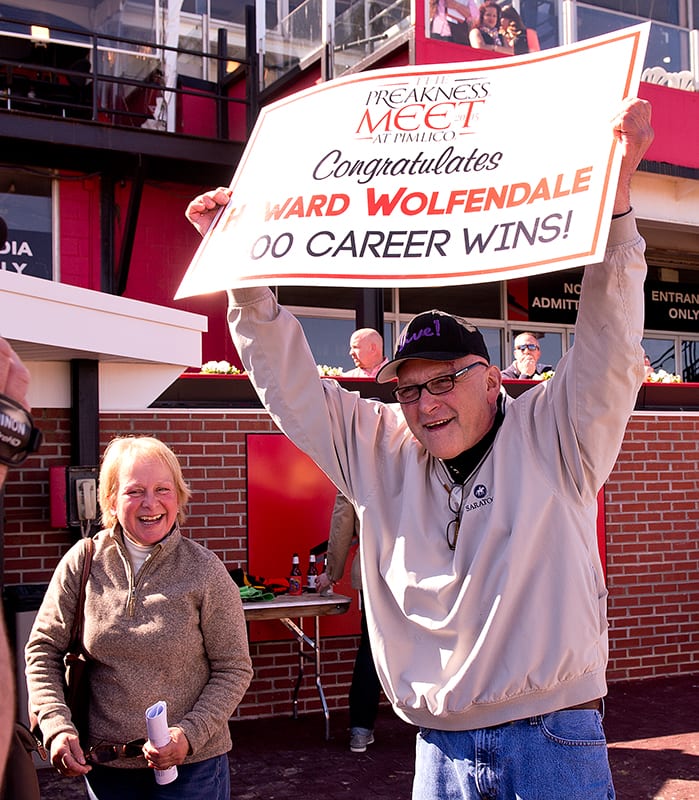 Trainer Howard Wolfendale won the 1,500th race of his career when he saddled Miners Quest to victory in Saturday afternoon’s sixth race at Pimlico.

The popular Maryland-based trainer, who saddled Bold Affair to nine stakes victories from 2011 to 2013, was joined in the winner’s circle by family and friends after G. Russell Gourley’s Miners Quest rallied from last in the seven-horse field to win by a nose under jockey Sheldon Russell.

“Finally. That’s it. Finally. It’s finally over,” said Wolfendale, laughing, after the race.”

“It feels great,” said Wolfendale’s wife, Tammy, an exercise rider and owner. “It was a long time coming to get this particular win.”

Wolfendale, who saddled his first winner at Laurel in 1977 at age 21 and saddled his 1,000th winner at Laurel in 2005, was named outstanding trainer by the Maryland Thoroughbred Horsemen’s Association in 1999 and ranked 37th in wins in 2006. He saddled Michael’s Pride to victory in the 2003 Maryland Million Sprint and won the 2007 Maryland Million Turf Sprint with Happy Surprise. His daughter Maggie is the paddock reporter for the New York Racing Association.

Wolfendale said his success is due to a “total team effort.”

“I have Tammy and this man right here (Gourley) to thank,” he said. “Sometimes it can take a while to get a win like this. I just really wanted to do it in Maryland, so I’m happy it happened here.”

When asked recently about his favorite memory of training the past 38 years, Wolfendale said, “Bold Affair. I’d like to have another of her. But, for the most part, we’ve done it with hard-knocking claimers.”