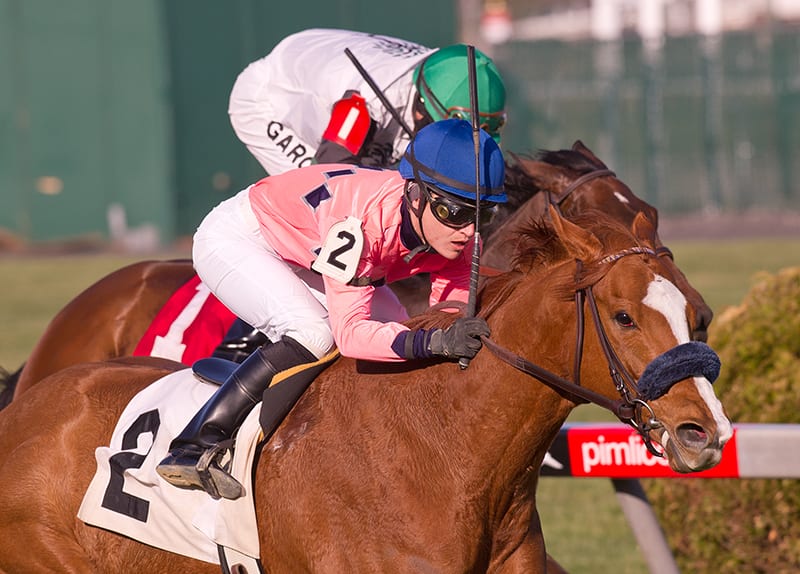 Two-time Dahlia winner Embarr won’t be back to defend her title, but 37 are nominated to the race. Photo by Jim McCue, Maryland Jockey Club.

In all, 151 horses were nominated for six stakes worth $575,000 on April 18 that comprise the first of three big weekends during the eight-week Preakness Meet at Pimlico, which kicked off April 2.

Among the Tesio nominees are Lael Stables’ Divining Rod, second by a neck in the Sam F. Davis (G3) Jan. 31 to kick off his sophomore campaign, and Illinois-bred Dom the Bomb, who capped his juvenile season with back-to-back stakes victories at Hawthorne Park.

Dahlia nominee A Little Bit Sassy has yet to make her 4-year-old debut after winning two of 10 starts in 2014 including the Edgewood Stakes. Disqualified from first to fourth in the Regret (G3), the Michael Matz trainee was second in the Lake George (G2) at Saratoga and has run in five consecutive graded stakes.

A pair of $100,000 sprints are scheduled, the Stormy Blues for 3-year-old fillies going five furlongs on the turf, and the Primonetta for females 3 and up at six furlongs on the main track. Stormy Blues nominee Lady Shipman has won three straight starts and is joined by stakes winners Harlan’s Honor, Irish Jasper, Lake Sebago and Spotted Heart.

Lady Sabelia won four of five starts in 2014 and began this year with two victories from three outings including a front-running score in the Barbara Fritchie (G2) Feb. 14 at Laurel. Five of her eight lifetime wins have come at the Primonetta distance, one of them her only try over the Pimlico surface last May. Shadwell Stables’ Mamdooha shows five consecutive wins, most recently coming off a year layoff to capture the March 14 Correction at Aqueduct. Who’s In Town capped her 3-year-old campaign with back-to-back wins at Laurel, including the seven-furlong Safely Kept.

Eleven horses were nominated to the $75,000 Geisha for females 3 and up going 1 1/16 miles on the main track led by Celtic Katie and Brenda’s Way, who ran 1-2 in last year’s Geisha, separated by 5 ¼ lengths. Ken and Sarah Ramsey’s Awesome Flower kicked off 2015 with three wins from four starts including a pair of stakes. Eddy Gourmet has won two straight, most recently the Conniver against fellow Maryland-breds March 21 at Laurel.