Juan Vazquez was suspended for a fight at Delaware Park but ejected, along with his assistant Hector Garcia, from Laurel Park, Pimlico, and Bowie. Photo by The Racing Biz.

Nutshell: If Juan Vazquez was ejected from Maryland’s tracks, why is he entering horses elsewhere? The answer points to the strengths and weaknesses of ejection itself.

When the Maryland Jockey Club asked trainer Juan C. Vazquez and his former assistant Hector Garcia in February to remove their horses from the company’s property and find someplace else to race them, that, many observers thought, was that.

They wouldn’t see Vazquez — a trainer who’s developed something of a “ne’er do well” reputation for both medication violations and physical altercations — or Garcia any longer.

And yet, just a month later, Vazquez appeared back in the entries: two runners at Charles Town last night and another at Parx Racing over the weekend.

The response of the internet, at least, was swift, and predictable: “Ridiculous,” said one commenter.  “A traveling circus,” lamented another.

“This idiot should be banned from ever training again,” said a third.

In June, Vazquez approached jockey Trevor McCarthy near the Delaware Park winner’s circle and initiated a confrontation that quickly became a fight.

When the dust had settled, Vazquez found himself arrested and, later, the recipient of a six-month suspension from the Delaware Thoroughbred Racing Commission — a suspension that all other racing states typically honor.

While serving his time, Vazquez turned his operation over to assistant Hector Garcia.  In about a six-week period of December and January, Garcia-trained horses running at Laurel Park accrued three positive tests for the banned steroid stanozolol and a fourth for the sedative xylazine.  The quartet of positives earned him about a year in penalties from the Maryland Racing Commission, which employed the new multiple medication violation points system, resulting in a significantly longer penalty.

That was the last straw. The Stronach Group, owners of the Maryland Jockey Club, which owns Laurel Park and Pimlico, exercised its right to exclude people from its property and sent the pair packing. 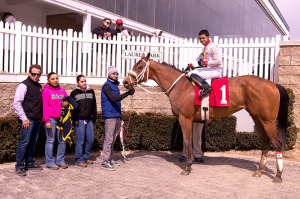 The ability to eject people is powerful; neither Vazquez nor Garcia nor their horses are allowed on MJC grounds unless and until the company decides to allow them back.

Yet it is also based on the company’s own internal assessment of the situation — as opposed to an agreed-upon rulebook — which may differ from another track’s read of it.

Moreover — and here’s the rub — it is also localized.

The MJC’s decision, in other words, may or may not carry any weight with other tracks.  Some may follow suit (as Penn National reportedly has); others may decide not to.

Regardless of the MJC’s action, Garcia will be out of action until his suspension expires.  The suspension of Vazquez, however, is already up; it’s up to other tracks how to respond.

Though the new multiple medications violation policy imposes additional penalties on repeat offenders — attempting to fix what was widely perceived to be a loophole that allowed repeat offenders to get off with scant punishment — that system only began last year.  And it focuses on medication issues — not, for example, fighting.

Sinatra portrayed the MJC as, in essence, putting together the pieces of the story in a way that the state’s Racing Commission could not.  “Commissions look at this on a case-by-case basis,” he said, as opposed to a more holistic view.  Vazquez had been suspended before for medication issues  (as well as for fighting) but not since the imposition of the new system.

Yet the use of ejections — a power all racetracks use at one time or another — is in many ways an informal one that tracks to some extent keep to themselves.

Both Sinatra and Parx Racing’s Director of Racing Sam Elliott echoed that, saying that they typically do not take steps to inform other tracks of ejections.  Elliott said that he has done so at certain times in the past, such as when, while at Suffolk Downs, he had informed other tracks about individuals who had violated his track’s anti-slaughter policies.

All said they would answer questions when asked by other tracks’ racing officials.

Of course, the Vazquez ejection was relatively high-profile, and Zimny and Elliott both were aware of it.

Zimny said staff from Charles Town had spoken to MJC personnel, and Elliott said that he personally had spoken with the Stronach Group’s Chief Operating Officer Tim Ritvo about the ejection.  What they do with that information is entirely up to them.

“We’re going to make our decision based on what we think,” Zimny said.

“Everyone has that seminal moment in their career [where they either straighten up or are gone],” agreed Elliott.  “I believe in redemption.”

Elliott says that he does not consider Vazquez’s presence a “horse welfare issue,” adding that “you could point to any number of people” with medication violations.

Though for the most part public reaction focused on Vazquez’s reputation for medication violations, it’s notable that Vazquez’s recently expired suspension was not for a medication violation but for his fight with McCarthy — a difference perhaps obscure to many racing fans, who often paint individuals with a “good guy” or “bad guy” brush and see penalties handed out as resulting from their innate qualities rather than specific violations.

What’s more, Elliott points out that Vazquez has served the suspension meted out to him and been restored, as the rulings say, “to good standing.”

“If a guy has served his suspensions, then he’s done with it,” Elliott said.

Still, both tracks are hedging their bets.  Neither awarded stalls to Vazquez; Elliott called that “too hot to the touch.”

Ultimately, a track’s ejection is generally a blunter and less effective instrument than a Racing Commission suspension.  Hector Garcia, for example, with his year in Commission-imposed suspensions, won’t be training anywhere until that term is up; Vazquez, meanwhile, will live in a patchwork world in which some doors are open to him, and some are closed.

Which isn’t to say that ejections are without effect.  Both tracks will be keeping a close eye on Vazquez, and both indicated that they would implement a policy substantially stricter than “three strikes and you’re out.”