In this first of two parts, we sit down with Stronach Group Chief Operating Officer Tim Ritvo to explore the company’s vision, goals and strategy with horse racing and the Maryland Jockey Club. In the second installment, we will delve more deeply into the steps the company will take in Maryland in the coming months and years.

If it’s possible to be in a hurry while taking your time, Tim Ritvo is.

In the course of a recent conversation at his Laurel Park office, Ritvo shows a reporter several spreadsheets, draws a diagram to clarify his meaning on one point, pops up a chart on his computer.  His passion — as well as his impatience with the status quo — is evident.

But then he says — as he’s said in numerous meetings around Maryland in the last two months — “It’s a grind.  There’s no silver bullets, and everything has to be done in a sequence.”

Maybe that methodical approach stems from his background.  What led him to his current position — as chief operating officer of the Stronach Group, overseeing the company’s half-dozen racing facilities — was, he says, “a 30-year process,” one that took him from jockey to racing official to trainer to, well, finally, to COO, and from his native Massachusetts — he grew up near Suffolk Downs, a geography still evident in his accent — to south Florida.

There’s no question he’s a racing guy.  His wife, Kathy, is a trainer.  His son Michael is a jockey.  He himself won 502 races as a jockey and then became the kind of workaday trainer he describes as “a 10 percent guy.”

Which on its face makes him an unusual fit in his current job.  But that, he says, is exactly why Frank Stronach called on him in the first place.

“I think his intent was to tap a guy like me on the shoulder not because I have an MBA,” says Ritvo, “but because what I do have is the business experience from the bottom up.”

That, of course, is no small task.  Indeed, in Maryland, for many years, it felt like an insurmountable one, to rescue an industry that, outside of Preakness weekend, felt more sepia-toned than in vibrant living color.

And so Ritvo is in Maryland — having given up what he calls “a nice, little, cushy job” running Gulfstream Park — as the tangible evidence that the Stronach Group is serious about making Maryland work.

“The entire corporate effort is going to be focused on Maryland,” Ritvo says.  “We are working very hard.”

Ritvo envisions a future that in broad strokes is one to gladden the heart of Maryland’s horsemen: the state once again where it belongs, at the center of the racing universe.

“Mr. Stronach has been so passionate about horse racing, and he wants to see it healthy,” Ritvo explains.  “He wants to see Florida, California, Maryland racing in perpetuity, go on forever.”

You can’t help but note the link: from Santa Anita, which has become the home-away-from home of the Breeders’ Cup; to Gulfstream Park, perhaps the very model of the Stronach vision, a downsized racetrack serving as the hub of an entertainment community, a racetrack making money with a year-round schedule; to Maryland, where horsemen have long bemoaned what they have seen is the Stronach Group’s insufficient commitment. 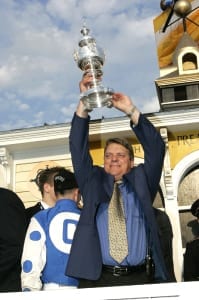 In the Stronach Group cosmos, this is definitely the company Maryland would want to keep.

Ritvo shifts, as he often does, to what he’d like, were he still a horseman, and how that dovetails with the Stronach Group’s agenda.

“I would like a racing schedule of 230 racing days.  I would like the same purse structure all year.  I would  know that I like to get clients that would never leave my state, or never leave me, and if we got a really good horse that needed to go to Saratoga, I would get to take them,” he ticks off.

“The horses would start off in Maryland, would mature and grow in Maryland, and then go on to wherever they need to go to compete in Grade Ones and Grade Twos around the country.”

The way Ritvo sees it, Maryland will be the region’s hub.  Ideally, he says, the Maryland Jockey Club will form a racing circuit with Delaware and Virginia, two nearby states where racing has struggled in recent years.  The circuit, he envisions, would have a “cohesive race schedule” under “one unified racing office.”

That will save money and allow that racing office to create a program that makes sense: no more overlapping conditions or races competing for the same horses, no more squeezing trainers to run here rather than there.

It would also almost certainly lead to a reduction, at least, in the number of races run in the mid-Atlantic, something that some horsemen will oppose.  But Ritvo points out that, as much as horsemen might like the chance to race in five-horse fields, that makes for an unattractive wagering product and an unsustainable business model.  What’s more, he adds, contraction is inevitable.

“You’re seeing a contraction happening now,” he says.  “The racing at Philadelphia [Parx Racing]– eventually, they will look to reduce days.  The racing at Charles Town — they’re already reducing days.  I think those things will play out.  Unfortunately, we [in horse racing] always go the painful route, rather than being preemptive, rather than trying to figure out the pattern.”

And that’s where, he believes, the Stronach Group’s advantage will be in the mid-Atlantic.

“That’s why I’m here — to hopefully fix the business model that makes sense, that gives [the Stronach] family a fair return so that racing can go on. So that [Frank Stronach] can say that he has set a legacy of racing and that under the right economic model and the right financial return to his family, please leave the properties alone, let them continue racing even when he’s gone.”