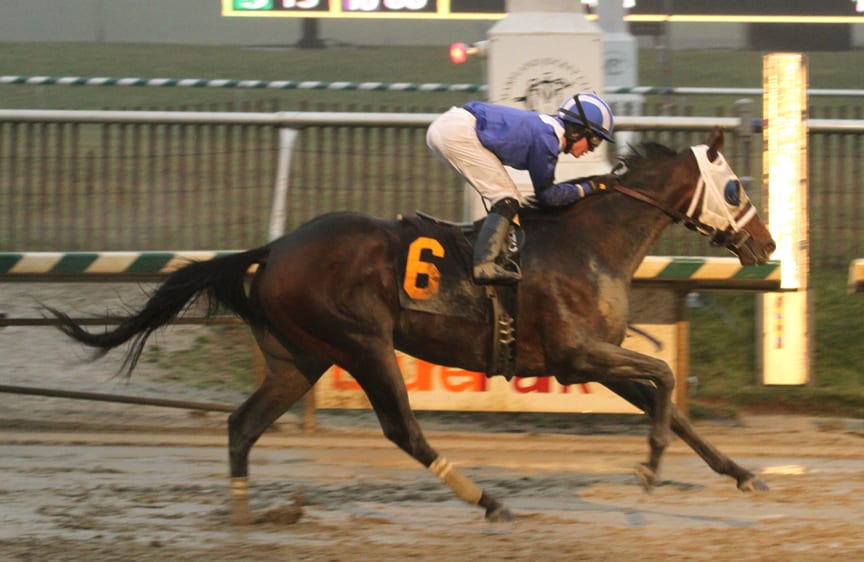 Sheldon Russell and Elnaawi run to victory in the Native Dancer Stakes. Photo by Laurie Asseo.

Sheldon Russell has no regrets. There have been bumps, bruises and breaks – 17 bones in all – to go along with his stumbles and spills over the past eight years. But, at this moment, he couldn’t be happier simply to be healthy and, once again, one of the hottest riders in the Mid-Atlantic.

Russell leads all jockeys in earnings during the current winter meet at Laurel and is second in wins. He also sits just three victories shy of the 1,000-win mark for his career. 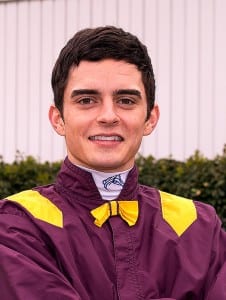 “Now that I’ve gotten closer to it, I can see it as a huge accomplishment,” Russell said. “It’s taken a long time to get here, with all the injuries and everything… I’m proud of myself and I’m proud that we have got to this milestone.”

Russell, 27, stands a good chance to reach the milestone by the end of the weekend at Laurel; even with Friday’s Laurel Park races canceled, he’s booked on 15 mounts over the weekend. It was at Laurel that Russell rode his first ever race in the United States for trainer and mentor Michael Dickinson in 2007. In the eight years since, Russell has added to his resume with a trip to the Grade 1 Kentucky Derby (aboard Done Talking in 2012), three graded stakes scores and several riding titles.

While there have been a lot of highs, injuries have been a recurring theme for the native of Bossier City, Louisiana, who was raised in England. As the son of a jockey, Russell surely understood the risks of race riding from the start, but his history of injury would certainly allow him every right to be bitter — which he isn’t, by the way.

As an apprentice, Russell won 26 races in the first five weeks of the Laurel fall meet before a spill fractured the T-5 and T-6 vertebrae in his back. That sidelined him for the rest of the year. Then, he came back and there was another spill. This time it was the T-8 and T-9 vertebrae that were fractured. Those two injuries cost him nearly nine months of riding. It was just the beginning.

“I broke all the ribs on the left side,” Russell said, as he began to recount all of his injuries. “I punctured the lung, as well. Had a tear on the bicep tendon, on the left side. Broke my foot in Arlington. Broke my hand at Colonial.”

Amazingly, in eight years, Russell has only experienced one in which he wasn’t sidelined by injury. That was in 2011, when he reached his high water mark for wins with 195.

His most recent injury — the broken foot and torn anterior cruciate ligament (ACL) at Arlington Park, outside of Chicago, last summer — cut short Russell’s first ever venture outside of the Mid-Atlantic. It had been going well — even with the time lost, he finished 13th among jockeys in purse earnings — and, despite the injury, showed that Russell could succeed outside the cozy confines of Maryland. He followed it up by bouncing back nicely to finish third in the jockey standings, by both wins and earnings, at Laurel in the fall.

The secret to Russell’s resilience is his dedication to working out and staying in shape. He cites swimming and running as two of his favorite off-track activities. Trainer Tim Keefe can attest to that. Not only has he been one of Russell’s biggest allies, he’s also a friend with whom he’s trained for and competed with in triathlons.

“He’s absolutely a great guy,” Keefe said. “When he’s riding, he’s incredibly serious. He studies the horses, he knows the horses and he knows his business. When he’s finished at the track, he can go out and enjoy himself outside of the racetrack environment, as well.”

Keefe’s admiration of Russell, both on and off the track, is reciprocal. The jockey gives Keefe much of the credit for being supportive from very early on in his career. Russell cites his victory aboard Keefe’s Eighttofasttocatch in the 2011 Maryland Million Classic as one of his most memorable wins.

The two are teamed up on one mount this weekend, Rollingdean in the fifth on Saturday.  That is also Russell’s fifth mount of the weekend, giving it an outside shot of being the milestone winner.

“It’s very exciting,” Keefe said. “Selfishly, I’d love for it to be on one of my horses that he can make that milestone on. It’s fantastic, he deserves it and he works hard. He has been a little unlucky over the years… so, it’s very exciting for him.”

It’s also an exciting time for Marty Leonard, who manages not only Russell’s book but also that of the current wins leader at Laurel, Jevian Toledo. To Leonard, it has also been tough to watch Russell — currently second at Laurel by wins — deal with setbacks brought on by injury because the jockey has rarely failed to produce when healthy. 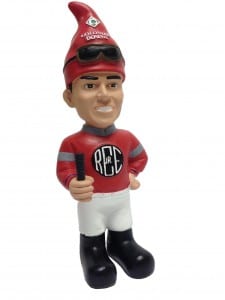 “Sheldon is just incredible,” Leonard said. “He sells himself. He knows what people want to hear. People don’t really get upset at him. They know he tries and they know he’s honest. He’s all class.”

Russell appreciates the support. He thanked his agent and Keefe, as well as trainers like Graham Motion and King Leathurbury — for whom Russell won his first graded stakes aboard Ah Day in the 2009 Grade 3 Toboggan at Aqueduct.

As much fun as the Arlington experience was — and a destination he’d consider again, if it became an option — Maryland is the place that Russell truly considers home. He would like nothing more that to win a major stakes race in Maryland, like maybe that big one that follows the Kentucky Derby — another race he’d also like to get back to.

All things considered though, Russell has has no regrets. He has already left his mark on the Mid-Atlantic and 1,000 wins will still feel really good, no matter the bumps along the way.

“If we were healthy, maybe we could’ve got here a little bit sooner,” Russell said. “But now that I’m this close, I’m just grateful that I’m healthy right now and that things seem to be going really well for us.”