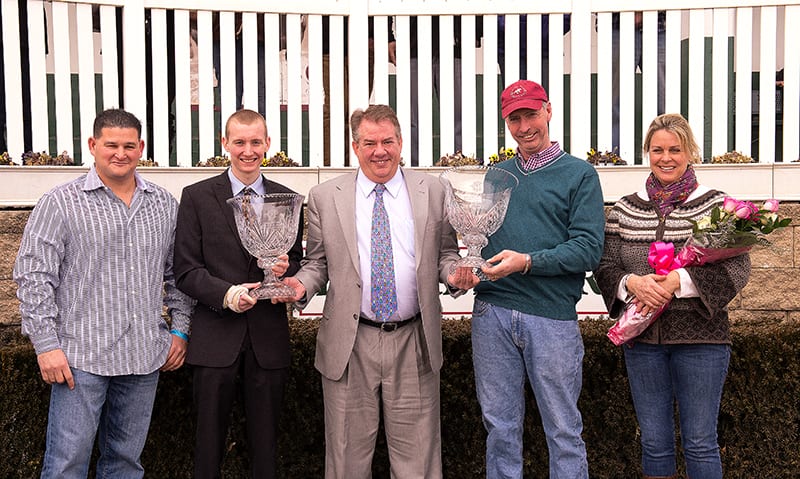 This afternoon, the Maryland Jockey Club recognized Trevor McCarthy and Kieron Magee for their achievements as horsemen on the Maryland major circuit during 2014. The ceremony took place in the winners’ circle at Laurel Park.

McCarthy and Magee earned titles in the jockey and trainer divisions last year. McCarthy ended the year with 167 victories at Laurel and Pimlico Race Course, 41 ahead of Victor Carrasco. The 20-year old captured the riding titles at all three meets during the year. He ended the year ranked seventh in North America in wins (263) and 20th in earnings ($8.1 million).

McCarthy, who has been on the sidelines with a wrist injury, said, “I’ve had some unlucky times, the spills the last few years, but also some pretty lucky times. I should be back in a few weeks, sometime in March, I just want to take it slow and I don’t want to rush it back. I would say 99% of what I learned came from my dad (former rider Mike McCarthy) and from a lot of different trainers and riders here in Maryland.

Magee had 55 winners at the major Maryland tracks, three more than Claudio Gonzalez. The 53-year old shared the Laurel winter title, captured the Pimlico championship and finished tied for fifth in the Laurel fall standings. He saddled winners in Maryland last year at a 28.7% clip.

“I couldn’t do it without my wife Kelly and I wouldn’t want to do it without her,” said Magee. “We’re looking forward to Pimlico, we love Pimlico.”

General Manager Sal Sinatra made the presentations to the honorees between today’s third and fourth races.