At the Virginia Racing Commission, gray skies, then a downpour 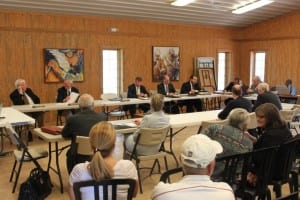 Another day, another meeting of the Virginia Racing Commission. File photo by Nick Hahn.

The Virginia Racing Commission assembled under gray skies Wednesday morning and adjourned in a downpour of uncertainty.

Many arrived at the meeting in downtown Richmond expecting a perhaps final showdown in a dispute between Colonial Downs and Virginia horsemen that’s been much larger than contract negotiating.  Their surmise seemed logical when Colonial’s representative strode to the lectern.

Then Colonial Downs’s owner and CEO, Jeffrey Jacobs, attending his first meeting in years, surprised horsemen when he opened by closing.

Moved towards the front of agenda, Jacobs’ statement to the Commission concluded with the surrender of the track’s “unlimited” license to operate its live racetrack and satellite wagering facilities.  The announcement came after laying out a hearty defense of Colonial’s request for race dates and a contract with a newly formed horsemen’s group.

Jacobs, who had stood in the winner’s circle on the track’s grand opening day with Colonial’s first winner, MacGyver, read the tea leaves and saw Commission support lacking for his public ultimatum.

“Colonial Downs cannot effect the change alone and it cannot afford to continue to operate in an environment that offers no possibility for improvement,” read Jacobs from his prepared statement.

Jacobs stated the surrender would be effective November 1in order to complete the current harness racing meet at Colonial Downs.

“I want you to know that in spite of all that has transpired I wish nothing but the best for all in the industry going forward.”  Jacobs concluded. “I will now leave to allow you to continue on with your business.  Thank you.”

And then Jacobs was gone.

Was it goodbye, or more tactical positioning?

“We hope that the conversations will move the industry forward next year,” Jacobs told reporters afterwards. “If they don’t, they don’t.”

After a recess that started shortly after Jacobs closed the door, commissioners reconvened and voted 5-0 to accept the surrender of Colonial’s license.  It’s believed to be the first time that the Commission has met without corporate representation from Colonial Downs present.

Whether that move is more symbolic, or more functional, remains open to question; Colonial’s unlimited license may have been up for a renewal in any case.  Colonial’s surrender was nearly 20 years to the day of its issuance, and the term of the 20-year license may have been set to expire (there is some question about the exact starting point of the license). Throughout the 2014 impasse, Colonial had challenged many of the Commission’s orders and findings and was on the hook for 25 days of racing in 2014; the Commission could have conditioned renewal of the license on meeting certain benchmarks that Colonial may have preferred to avoid.

Commissioner Stran Trout was on the New Kent Planning Commission when Colonial Downs was awarded the license.  Trout recalled the impact of the founding of the track.

The license surrender “was not the result anyone wanted to see,” said Trout before praising the track’s contributions to growth in the county.  “It all started with Colonial.   That was the key event that helped start it all.  Prior to Colonial, New Kent County was known as a backyard wood land of Chesapeake Corporation. “

“We always felt there was a deal to be made,” added Frank Petramalo, executive director of the Virginia Horsemen’s Benevolent and Protective Association (VHBPA), which represents the state’s horsemen.

Commission Daniel Van Clief, Jr. tried to put a positive spin on the latest twists and turns. He suggested of Virginia’s racing future that “perhaps it’s one of those instances where it has to break in order to put it back together again.”

Unless, of course, it’s more of a Humpty-Dumpty situation.

Van Clief then thanked Colonial for the company’s efforts, but there wasn’t anyone with Colonial left in the room to hear him.

To be put back together, that future will undoubtedly need legislative help in January.

Secretary of Agriculture and Forestry Todd Haymore stated he had spoken with members of the legislature and Governor’s Office, who looked forward to being partners with the Commission in the 2015 General Assembly.

Wednesday’s meeting was not a full departure for Jacobs from the Virginia racing scene.  In addition to owning the acreage of one of the premier American turf courses and its grandstand, Colonial still has EZ Horseplay under a separate license. The advance-deposit wagering company includes on-line wagering through a website and user-friendly kiosks located at off-track betting facilities as well as bars and restaurants. Account wagering will continue among the licensed entities that operate in Virginia, including EZ Horseplay, allowing Virginia residents to wager via phone or internet.

Jacobs stated that the salaries of Colonial employees will be paid through the end of the year.  According to Jacobs, Colonial employs 177 full and part time associates and 350 associates during the live meet.

Jacobs told reporters that he hadn’t made plans for the Colonial Downs property and tossed a late-breaking bit of optimism into the day.

“I’d like to keep it open for a year or two and hope that somebody can come up with a solution,” he told reporters, a solution he said he would like to participate in if it involves “high-end racing” at Colonial Downs.

Then he and his team strode off into the October rain.