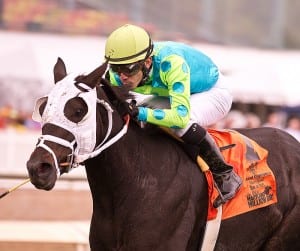 Ask longtime Maryland racing fans to name the circuit’s leading trainer from the early 1970s to the mid-1990s, and there’s a pretty good chance they’ll come up with King Leatherbury.

Ask them who picked up that mantel after Leatherbury, and they may well point you to Dale Capuano.

The two trainers will arrive at Saturday’s Maryland Million day tied atop the all-time Maryland Million leaderboard by trainer wins. They’ll also arrive with smaller stables than they once had.

“Just to be tied with King in any category is an honor,” Capuano said. “Not too many people in the history of racing can say they’ve won over 6,000 races like King has. Right now I’ve only got 20 horses in training, but I’m hoping to win one or two on Saturday and maybe break the tie with King for the most Maryland Million wins. I can’t root against Ben’s Cat, but I’m hoping one or both of mine will come through for me.”

Leatherbury has won 6,440 races in a career that merits but has not yet received Hall of Fame recognition. His runners won at least 100 races every year from 1972 to 1997.

Neither is quite where he once was in terms of prominence, but both will arrive at Laurel Park on Saturday with high hopes. While Leatherbury’s will reside with his seemingly ageless homebred Ben’s Cat, running in the Turf, Capuano will saddle two horses on Saturday, Monster Sleeping in the Maryland Million Ladies on the turf and Wild For Love in the Maryland Million Distaff Starter Handicap on the main track in the finale.

While Ben’s Cat arrives as the most accomplished, most popular runner on the card this weekend, it is Monster Sleeping who is a defending champ. Last fall, after a third-place finish in the Jameela Stakes for Maryland-bred fillies and res, Monster Sleeping posted a solid two-length score in the Maryland Million Ladies on the Laurel lawn. This year she will head into the Ladies in similar fashion, having finished second in the Jameela last month.

In the Jameela, a six-furlong sprint on the grass, Monster Sleeping closed gamely to finish second, just missing against the accomplished sprinter Madame Giry. That, hopes Capuano, could be the ticket to victory on Saturday.

“Last year she came into the race off a third-place finish in the Jameela and stretched out and won the Ladies,” Capuano said. “So, this year I’m hoping she can do the same thing after running second in the Jameela last time out. She seems to like stretching out a little bit on the grass. I was hoping that she would win the Jameela, but the longer race this weekend should be just right for her.”

A five-year-old daughter of Oratory out of the Norquestor mare, Bold Questor, Monster Sleeping has quietly enjoyed a solid career for Capuano and owner Chip Reed.  Monster Sleeping owns a solid 7-10-7 slate and $342,740 banked from 38 career outings. In addition to her Ladies win last year, she has also placed in three other stakes.

In Saturday’s finale, Capuano will saddle Wild For Love in the $50,000 Maryland Million Distaff Starter Handicap at one mile on the main track. The four-year-old Not For Love filly has won five of 26 career starts and earned $113,802. She also gives Capuano something Leatherbury does not have: a second chance on Saturday’s card to break the tie.

“I’m hoping that Wild For Love runs her race,” Capuano said. “If she does, I think she’ll be right there. But overall it’s going to be a quiet day for me and for King. I hope we both win at least one on Saturday and stay tied into next year.”

Capuano may share the current Maryland Million day record for wins with Leatherbury, and he also likely can lay claim to having saddled one of the best runners never to win a stakes on Million day. In The Curl posted a solid 26-24-14 slate, including 10 stakes wins, and nearly $750,000 bankroll in 83 lifetime starts. She hit the board in the Maryland Million Distaff a remarkable six consecutive years, from 1987 to 1992, but never was able to get the money. 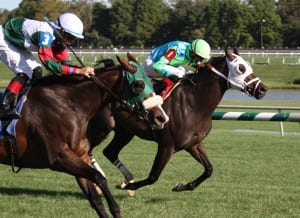 Madame Giry (outside) holds off Monster Sleeping in the Jameela Stakes at Laurel. Madame Giry is trained by Cam Gambolati for Nutmeg Stable and was bred in Maryland by Raintree Thoroughbred Farm Inc.

In 1991, In the Curl, then seven, entered the Maryland Million, then at Pimlico, in the best form of her career, having won five stakes and placed in five others. On Maryland Million day, she ran perhaps the race of her life, and it still wasn’t good enough.

That day, she went toe-to-toe with Safely Kept, the Maryland-bred who now holds spots in both the National Racing Hall of Fame and Maryland Throughbred Hall of Fame. The two hooked up early dueling for the lead and were heads apart for five furlongs. Gradually, Safely Kept wore down In the Curl to post a half-length victory.

That was Safely Kept’s third consecutive Distaff win, and the second time In the Curl had earned the place behind that rival.

“Looking back on it, In The Curl might have been the best one that I’ve ever run on Maryland Million Day and she ran second to Safely Kept,” Capuano recalled. “She never won one for me. But what can you do, Safely Kept was simply one of the best sprinters in the country. Running second to her is nothing to be ashamed of. In The Curl might be among the best horses that ran in a Maryland Million race and never won one.”