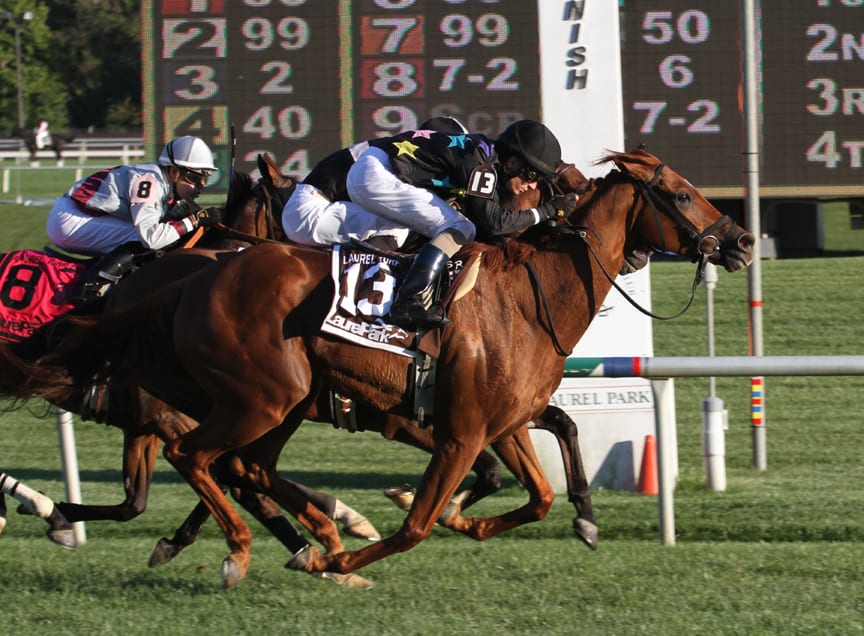 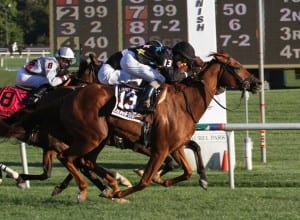 From  a Maryland Jockey Club release

Lilli Kurtinecz’  Manchurian High covered more ground than any other runner in the one mile and one half $100,000 Laurel Turf Cup, the fifth of six stakes races on the Laurel Park turf course, but it didn’t matter as he got up in time to win the marathon test for his owner-trainer.

Ahead of only one runner for most of the contest, Manchurian High carried Sheldon Russell to victory in 2:27.91 over the firm turf, beating Calvados by a neck, with St. Albans Boy another half-length back in third.

“He is a cool horse to ride,” said Russell. “He rarely shows any early speed. At the start he was running straight to the turn and my job was to keep him out of trouble and heap the momentum going. I knew the distance wouldn’t be a problem. I kept him four to five wide the whole trip. I just wanted a clean trip and it worked out perfectly today.”

The gelding finished third in the 2012 Laurel Turf Cup at odds of 97-1, beaten by a neck in a three-way photo for the win, when in the barn of J.B. Secor. Kurtinecz worked for Secor and purchased Manchurian High from her former boss 10 months ago. In six starts this year, he has won two-of-six and was off the board just once, the United Nations (G1) at Monmouth Park in July.

“I bought him as a jumper and I had him out jumping this morning before I brought him to the track,” said Kurtinecz, after winning her first career stakes race. “He’s been training for the Maryland Hunt Cup and that’s four miles so I knew he could go a mile and a half. He’s my pet. He lives on a Baltimore County farm and he’s turned out every day. He’s treated like a horse and I keep him happy. I kiss this horse more than I’ve kissed any boyfriend I’ve every dated.”