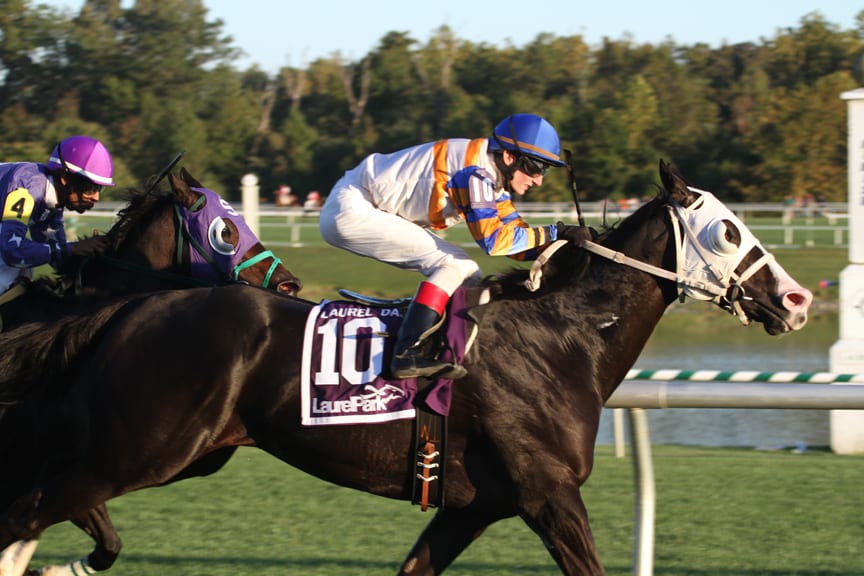 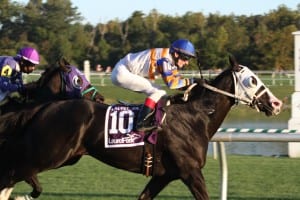 Dreamsgonewild inches by to win the Laurel Dash. Photo by Laurie Asseo.

In a blanket finish, Paul M. Steckel’s Dreamsgonewild ran down the speed and held off Ben’s Cat to win the $100,000 Laurel Dash, the last of six turf stakes Saturday afternoon at Laurel Park.

The 12-race card featured five open stakes races on the turf and the Jameela Stakes for Maryland-bred and/or sired runners.

Dreamsgonewild, a speedy son of Freud, who was ridden by Trevor McCarthy and trained by Bruce Alexander, covered the 6-furlong distance in 1:07.99, just a few tenths off the course record of 1:07.29. Bold Thunder finished second, only three-quarters of a length behind the winner, while Ben’s Cat, the 3-5 favorite, finished a neck farther back in third.

“We were going farther today than usual so my instructions were to take the lead if we could get it. If not, stay just off,” McCarthy said. “He didn’t get the lead so I stayed just off and we didn’t have any trouble in the race. He had a lot left in the last eighth but I didn’t think I would get by the four. As we approached the wire, the four got a little tired and my horse started to dig back in. Ben’s Cat, coming on the outside also helped to push us along. We were able to get up.”

It was the third win of the day for the 20-year-old McCarthy, who leads the Laurel rider standings with 18 victories.

“I’m Trevor’s great uncle,” said Alexander. “He rode a perfect race. I think I was riding as hard as Trevor was. I think he’s going to be one of the premier riders in the country. Very disciplined for a young kid.”

Dreamsgonewild was winning for the seventh time on the grass but this was his first stakes victory. He paid $16.

“This will pay for a lot of groceries,” added Alexander. “The four (Bold Thunder) was in front but we didn’t want to be chasing him the whole way. Then my rider heard Ben’s Cat coming and the horse pinned his ears back and won.”

Ben’s Cat, who became the seventh Maryland-bred to reach $2 million in earnings this summer, was looking to win the Laurel Dash for the third time in four years. The King Leatherbury homebred won the 2011 Laurel Dash, a race taken off the turf and was upset by Jazzy Idea two years ago. He won last year’s edition at odds of 3-5.

“He just didn’t have it today,” Leatherbury said. “I don’t know why. He went into the race fine. I wasn’t worried about the field. He shouldn’t have had any trouble if he had been himself. He got a perfect trip. No excuses. This is a devastating loss. This race is right down his alley. No tigers in the field, on his home course. It’s very disappointing. One race means something because it’s very unlike him. It’s not like him to not have any excuse when he runs like this.”

“He had a perfect trip the whole way,” said Ben’s Cat’s rider Julian Pimentel. “No excuses. He always runs the same race, he just couldn’t get there today.”