In Virginia dates dispute, if you can’t beat ’em, ultimatum 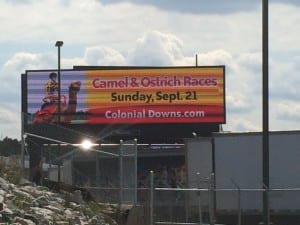 There’s no Thoroughbred racing at Colonial, but there are… Photo by Nick Hahn.

Colonial Downs vowed today to turn in one or the other at the next Virginia Racing Commission meeting.

“This process must come to an end,” said Colonial Downs President Ian Stewart.

At the Commission’s first meeting since May 19, Stewart outlined how the process could end in failure. Unless Colonial’s proposal is accepted by the state’s horsemen, represented by the Virginia Horsemen’s Benevolent and Protective Association (VHPBA), Colonial will ask the Commission to recognize another horsemen’s group, which some deride as a “puppet” organization; that second group would, presumably, be more willing to respond favorably to the track’s proposal. If that gambit were to fail, then Colonial would turn in its license at the conclusion of the harness meet that ends Sunday, October 26.

After learning of the schedule, commissioners asked VHBPA executive director Frank Petramalo for his preliminary opinion of the proposal he received Tuesday afternoon, less than 24 hours prior to the Wednesday morning meeting.

“Not acceptable to me,” responded Petramalo, later recognizing the 10-year-plan as the opening proposal.   Petramalo announced that the VHPBA will prepare a counter proposal for Colonial Downs within the several days.

The Colonial proposal reportedly includes 22 days of racing between April and November with stabling only on race days, unless those additional expenditures were paid by the horsemen. At Laurel Park on Saturday, several Virginia horsemen suggested that such a ship-in meet would be unacceptable to them.

Commission members discussed the possibility of mediation should the two proposals be deemed to not be far apart. A previous mediation effort, in February, went poorly. Few want to revisit that experience should the sides remain far apart.

“There’s no need to go through the charade of mediation when one of the parties says there’s no hope,” advised commissioner Clint Miller. “The racing business works best when there is a partnership with the state, the track and horsemen. Obviously, we don’t have that today.”

Wednesday’s meeting was racing’s first under the Secretariat of Agriculture and Forestry, headed by Todd Haymore, who was introduced. Prior to July 1, pari-mutuel horse racing was under the purview of the Office of Commerce.

Colonial Downs opened its harness meet Wednesday afternoon with its signature promotional event being camel and ostrich racing on September 21, more typical of a county fair than a racetrack.

After the summer of racing stagnation at Colonial Downs, the winds of autumn suggest a change in the air. Contract or license? Promise or threat?