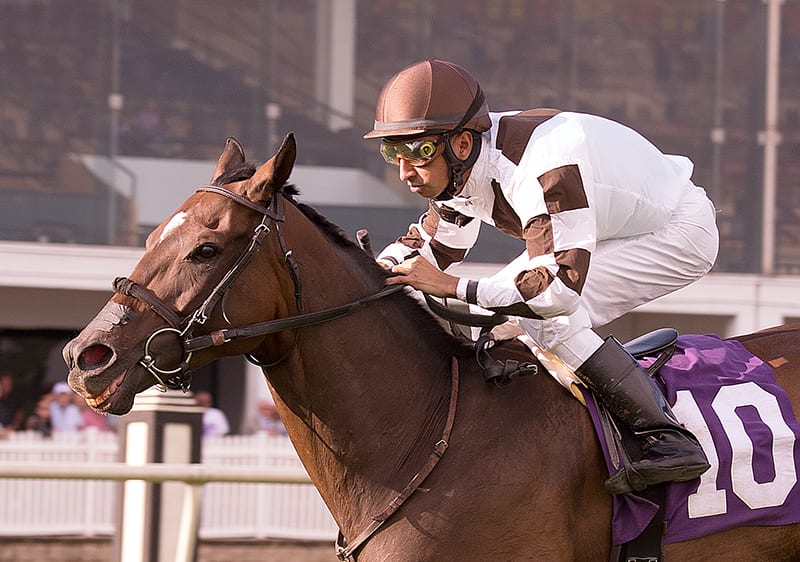 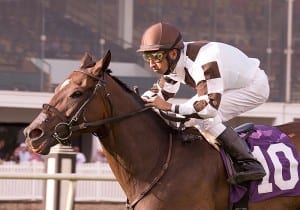 James Hackman and  Glenn R. Thompson’s Two Notch Road blew the doors off his competition and won the $60,000 Punch Line Stakes for Virginia-breds.

After racing under a snug hold for much of the way in the 5-1/2 furlong test on the firm turf, Two Notch Road and Julian Pimentel roared by the leaders down the stretch and won by two lengths in 1:01.91. Post time favorite Boltin’ Out could not match strides with the winner but finished a game second, while Joe Tess took third.

The winner, a Partner’s Hero offspring trained by part-owner Thompson, had not won a race since June 2010 and age seven, was notching only his fourth lifetime victory.

“Julian rode him very well,” said Thompson. “It means a lot to win here because it’s been a long, dry spell. I feel like things are finally turning. I think we’ll be back here for the Dash.”

“We wanted to get him to relax and make a key move,” said Pimental. “It was my first time on the horse. He’s pretty good.”

In the filly and mare sprint, Heaven Knows What cruised to a two-length win.

R. Larry Johnson’s Heaven Knows What cruised to victory in the $60,000 Oakley Stakes for Virginia-bred fillies and mares.

Victor Carrasco held the reins atop the Michael Trombetta trained daughter of Holy Bull. The grey-roan mare was still under a drive when she reached the 1/16th marker but was geared down going to the wire. She finished two lengths in the clear in 1:02.76 for 5-1/2 furlong distance over the firm turf.  Lion Down by Me rallied to take second and Wardelle was third.

“Victor is familiar with her,” said Trombetta. “He has ridden her a couple of times now. He keeps her in the race and gives her a good chance. I was worried about her coming back in two weeks but you have to run when the races are offered. Fortunately, she kicked on and kept running today. I was very proud of her.”

Heaven Knows What finished second in last year’s Oakley Stakes when the race was contested at Colonial Downs.

The winner was bred by her owner. She paid $5.80 as the program and post time favorite.