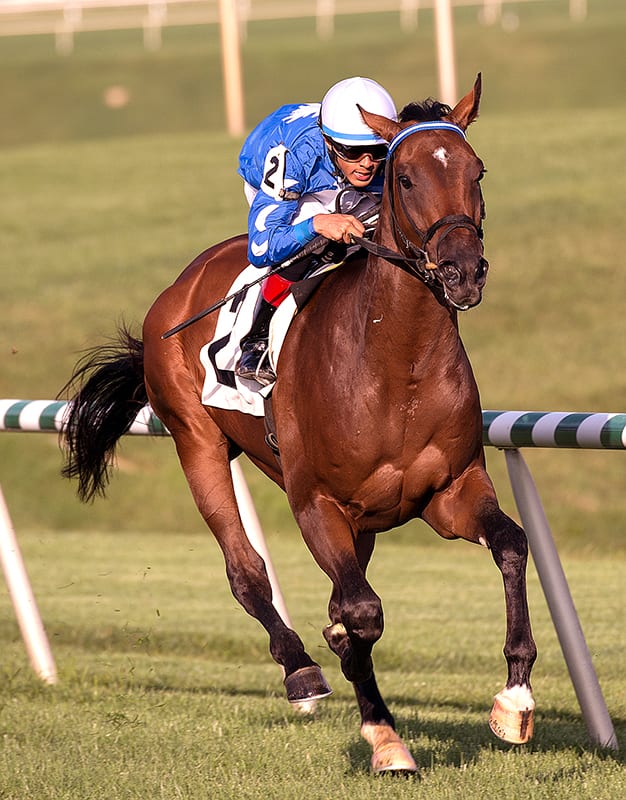 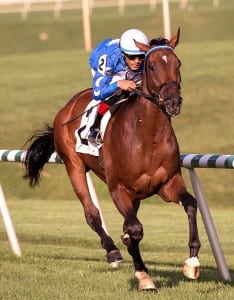 Moon River was much the best in the second division of the Jamestown at Laurel Park. Photo by Jim McCue, Maryland Jockey Club.

William M. Backer Revocable Trust’s Moon River shot through a seam between the inner rail and frontrunner Tiz What She Is and drew away to win the second division of the $60,000 Jamestown Stakes for 2-year old Virginia-breds.

Victor Carrasco accepted the riding assignment from trainer Jonathan Sheppard aboard this first time starter by Bluegrass Cat. The bay colt was patiently ridden until a path cleared, allowing him to wrest the lead and complete the 5-1/2 furlong distance over the firm turf in 1:03.45. Moon River won by 2-1/4 lengths over Johns Kitten, with Willisville taking third.

Assistant trainer Keri Vrion said, “He trains well, vans well, behaves nicely and has really been like an older horse from the very beginning. Mr. Sheppard usually thinks a lot of a horse when he starts one for the first time in a stakes race. We had big expectations coming into today because this horse has done everything right and he showed us that we were right.”

In the first division of the race, Hooligan posted a popular victory.

Owner-trainer Wesley Ward sent Hooligan to Laurel Park after the Saratoga meeting and worked her here on September 6, a prep which set up her popular victory in the first division of the $60,000 Jamestown Stakes for 2-year olds.

The race was hard fought as Trevor McCarthy urged the daughter of Exchange Rate to chase and press rivals before finally pushing to the fore a dozen strides from the finish line. She won by a length in 1:03.81 over the firm turf. Bay Finn arrived late on the scene to take second money away from Secret or Not.

“She’s young and still learning but she definitely has some talent,” said McCarthy. “I think she’ll be something down the road. She had one race under her belt and the experience helped. I kept her out of trouble and when I asked her at the top of the stretch, she made her run.”

Hooligan, who had balked at the gate in her previous start at Saratoga and finished off the board, paid $2.60 this afternoon.