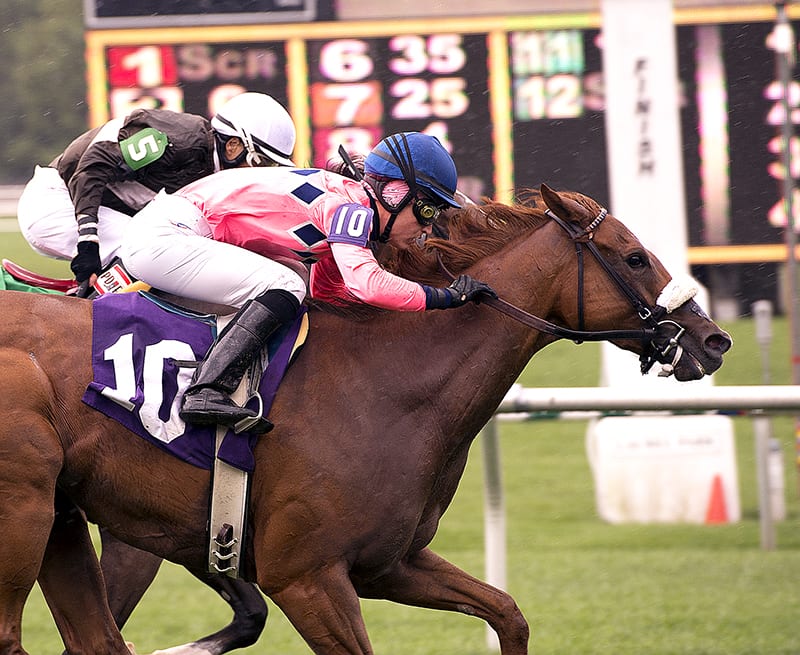 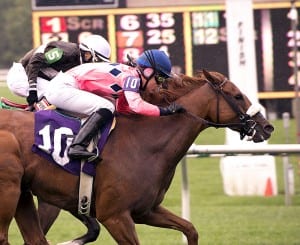 Panic Stable LLC’s Rose Brier became a stakes winner for the first time when he captured the $60,000 Bert Allen Stakes, the sixth in a series of Virginia-bred races contested at Laurel Park this afternoon because of the shuttering of Colonial Downs this summer.

Rose Brier, a Mizzen Mast offspring who is trained by Jane Cibelli and ridden by Trevor McCarthy, paid $5.20 as the favorite in the 1-1/16th mile test over the firm turf. The 5-year old beat second choice Hard Enough by 3-1/4 lengths, with Dannhauser finishing only a nose back in third. His winning time was 1:42.97.

McCarthy has ridden Rose Brier in his past three starts. He said, “My horse clipped heels and I took him back a little bit but it didn’t seem to bother him. They were kind of going slow in front. He handled the track and the pace perfectly. Once outside I knew he’d be fine. Rose Brier and I get along very well. He’s a big horse and I fit him. He’s one pace but when he gets his stride he rolls. I told Jane she’ll have to fly me to Gulfstream to ride him again.”

Rose Brier is five for seven this year, with all his wins coming on the turf. He started the year racing for a $35,000 claiming tag in Florida.

On the distaff side, Embarr embraced her drop from graded company with a narrow win.

Owner-trainer Susan Cooney sent Embarr out to win the $60,000 Brookmeade Stakes, the first of six stakes for Virginia-breds on today’s twelve race program at Laurel Park.

Embarr, a six year old daughter of Royal Academy, left the gate as second choice in the field of eight fillies and mares. Forrest Boyce had already guided Embarr to six of her previous eight victories. Today she gave Embarr a patient, stalking trip, racing in mid-pack before sending her after the leaders around the far turn. Embarr reached the front in deep stretch and won by a neck in 1:42.38 over the firm turf. Misty In Malibu finished second and post time favorite Lawn Party, a Todd Pletcher trainee, took third.

Embarr won the Brookmeade in both 2011 and 2012 when it was contested at Colonial Downs.

“She ran very well today,” said Cooney. “We have been racing her in graded company and today she was in where she had a good chance to win. I was concerned when they slowed the pace but Forrest had her in the right spot and she was able to run them down. We are hoping that she can win against graded company and we plan to give her one more race this year, then she will become a mommy next year. She is still sound and able but she’s getting older now.”

Embarr, whose last victory came when she defended her title in the Dahlia Stakes at Pimlico in April, paid $7.60.