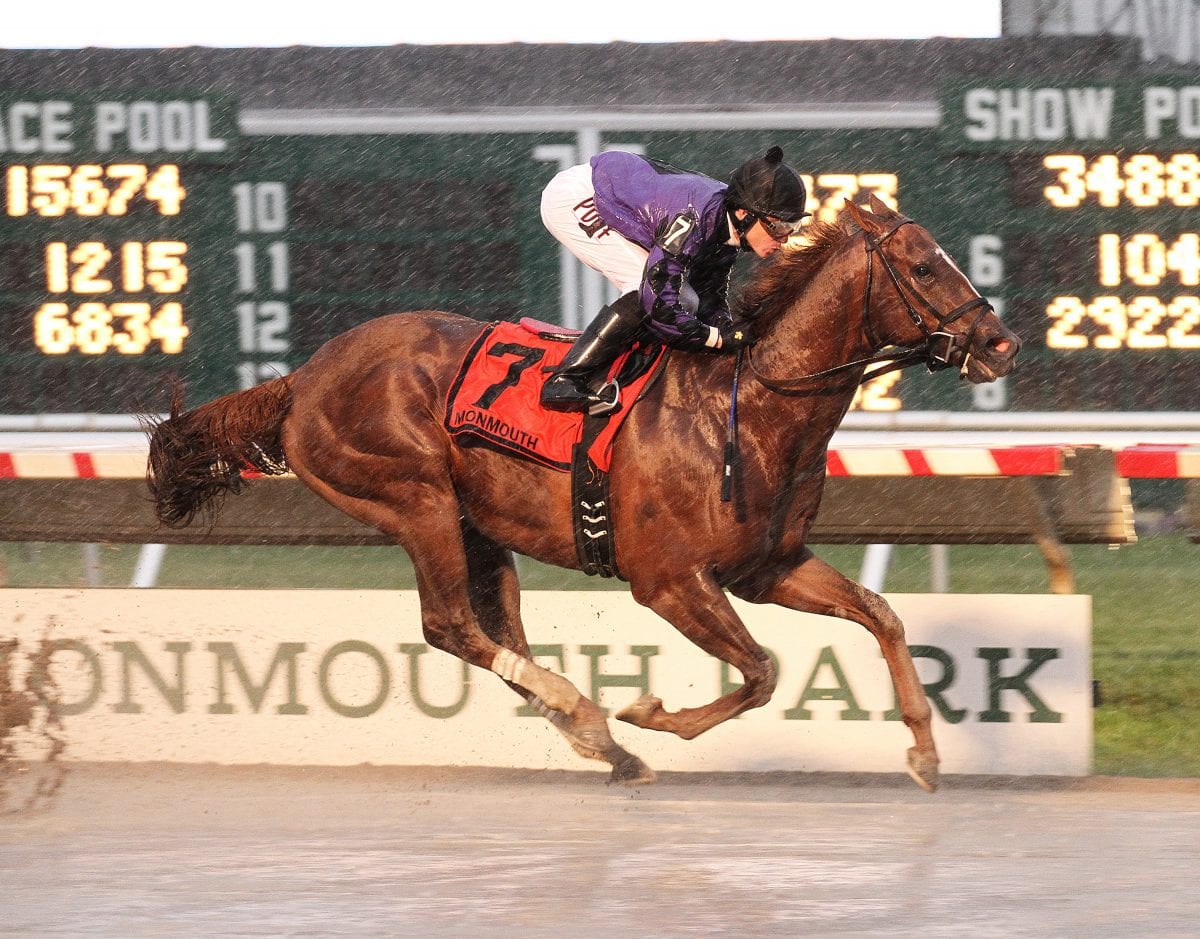 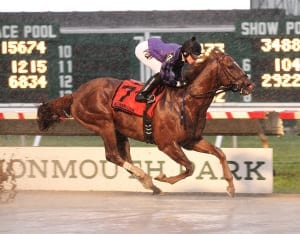 Rainbow Heir splashed to a dozen-length score in the NJ Breeders Handicap at Monmouth. Photo By Aubrey Therkelsen/EQUI-PHOTO.

In a day dedicated to the best-of-the-best runners bred in the Garden State, Rainbow Heir stamped himself a solid contender in the open sprint division, winning by an easy 12 ½ lengths over a sloppy main track, as late afternoon rains rolled into Oceanport.

“He ran good, we were certainly happy,” said winning trainer Ben Perkins Jr., who won two stakes events on the card.  “You’re always concerned when you run, but we wanted a race between his last and the Keeneland race (Oct. 3, Phoenix Stakes).  We don’t want to plan too far ahead, but hopefully that will get us to the Breeders’ Cup (Nov. 1 at Santa Anita).”

Earlier on the card, Disco Rhythm moved for the lead around the turn before reporting home a two-length winner in the $60,000 Charles Hesse III Handicap, returning $12, $6 and $4 after stepping the mile and a sixteenth over a fast main track in 1:45 1/5.  Gadget Man rallied to complete the $92.60 exacta and paid $5 and $3.60.  It was another three lengths back to Silent Appeal, who paid $4.60 to show in the field of 10 colts and geldings.

“I know this horse has a lot of speed and I knew someone else was going to go,” said winning jockey Ramon Moya. “So I just decided to lay third and he relaxed for me really well.  On the backside he started creeping up and creeping up and when he hit the top of the stretch he switched leads and leveled off and I knew we were gone from there.”

Trained by Tim Kelly, Disco Rhythm has won eight of 42 lifetime outings, including his last two for Prima Ventures LLC.

In the Jersey Girl Handicap, Maybe Tonight grabbed the lead in mid-stretch and held her rivals safe at bay, winning by a length and a half under jockey Paco Lopez.  The Jersey Shore Racing Stable color-bearer covered the mile and a sixteenth over a fast main track in 1:45 1/5 and paid $6.20, $3.80 and $2.80 as the favorite in the field of eight fillies and mares.  Long Blooming Rose held for second, paying $6 and $4.20 and completing the $33.60 exacta.  It was a nose back to the hard-charging Stiffed, who paid $3.80 to show.

“It was great for the owner,” said winning conditioner Perkins Jr.  “This was their first stakes winner and they’ve bred about eight or nine horses.  This filly showed earlier this year that she wanted to go a distance, so we picked out this race and mapped out a plan to get here.  Obviously, it all worked out.”

Maybe Tonight, a 4-year-old filly by Defrere from the Pick Up the Phone mare Phone Card, has won four of 12 outings, good for earnings of $122,455.

\With 128 pounds on her back, most of that jockey Angel Serpa, Geeky Gorgeous sat off the early pace before moving with a three-wide run around the turn and opening a length margin of victory at the wire in the Eleven North Handicap.  The winner returned $3.40, $2.40 and $2.10 as the odds-on favorite in the field of five fillies and mares.  P J’s Superego completed the $17.80 exacta and paid $4.80 and $2.60.  It was another 2 ¼ lengths back to More Than a Party, who paid $2.10 to show.

“She carried the weight well,” said winning owner and trainer Daniel J. Lopez.  “I told the jock to take back and sit about three or four off it and come with one run. That’s exactly how it happened.  She’s a real nice mare that knows her job and gets it done.”

A 5-year-old daughter of Devil His Due from the Pure Prize mare Thatholeinmypocket, Geeky Gorgeous has won 10 of her 20 starts, good for earnings of $463,554.