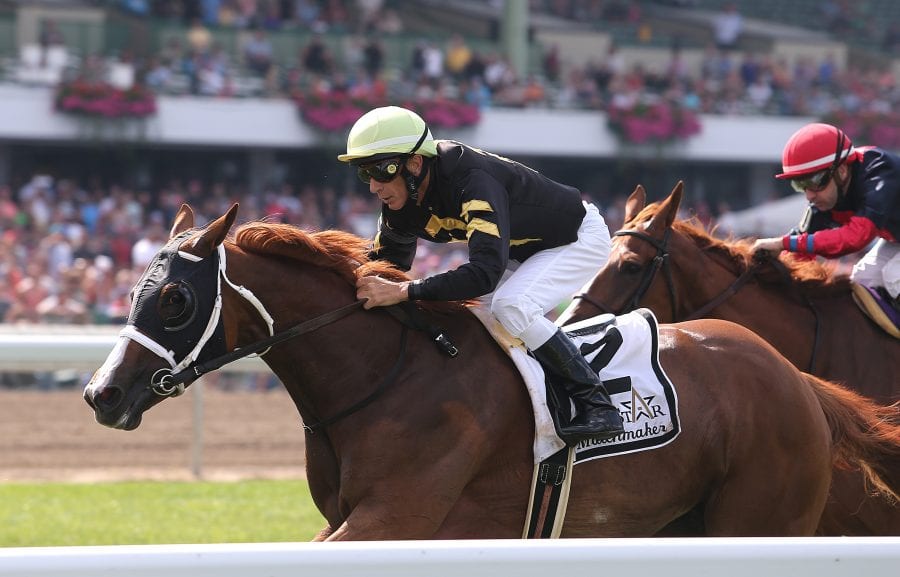 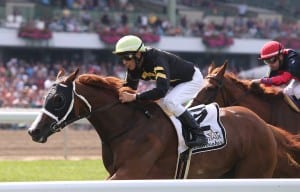 Starstruck doesn’t win often.  But she does make them count.

The five-year-old Irish-bred daughter of Galileo won last year’s Grade 3 Matchmaker at Monmouth and promptly lost her next six races.

But the chestnut mare bounced back in a big way today, powering between horses to take her second consecutive Matchmaker.  The win in the $150,000 event fattened her bank account by $90,000 and earned her a free breeding to one of three Winstar stallions: Paynter, Artie Schiller and Drosselmeyer.

“I’ve been watching the races all day and speed looked like it’s been holding on turf,” said winning jock Kerwin Clark, “so I wanted to be as close as possible without using her.”

“There wasn’t a whole lot of instructions,” said trainer Larry Jones.  “Kerwin’s been on in the morning and he knows what to do.”

Though sixth in the early going of the nine-furlong affair, Starstruck was never more than a few lengths off the pace of early leader Nashly’s Vow, who pulled the field through six furlongs in 1:10 4/5 seconds.

One key was Clark’s patience in letting the race take shape.

“Around the turn, I wasn’t sure if we’d be able to get through and I was just hoping it would split open,” he explained.  “It did and she ran and ran well.”

Another may have been the firm going that has allowed horses with early lick to fare well on the Monmouth lawn.

“They told me when they sent her from Ireland that she didn’t like soft going,” said trainer Jones, “and until we got to Delaware the other day we didn’t get firm going.”