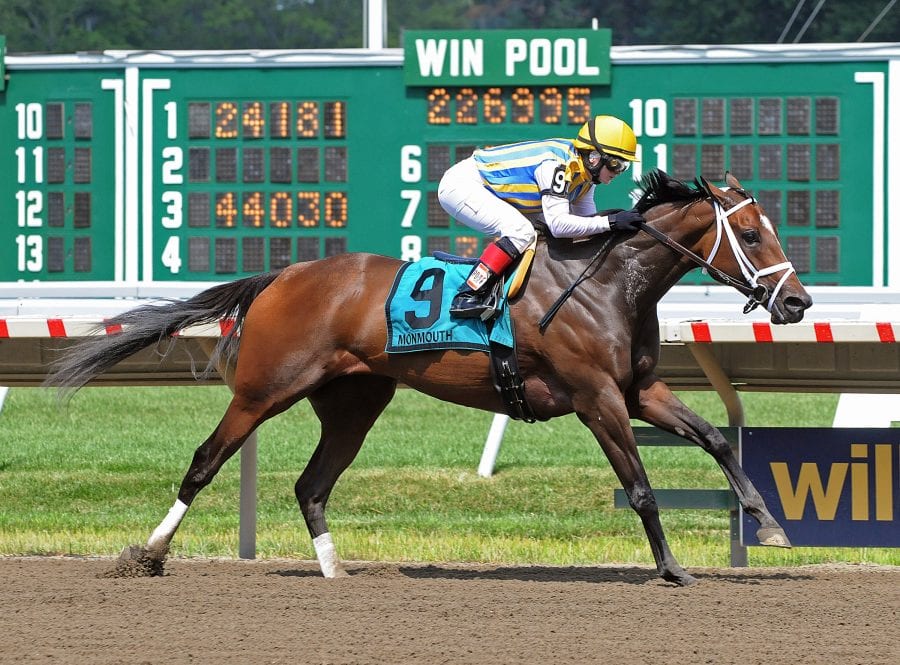 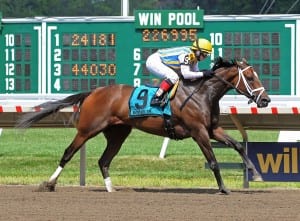 The $200,000 Grade 2 Molly Pitcher is one of the oldest stake races on the Monmouth calendar, and it’s been won by some top fillies over the years.

But it was the least seasoned runner in a seven-horse field who took home the money today.  Majestic River, a daughter of uber-sire A.P. Indy who fetched a cool $425,000 at auction as a yearling, stalked the early pace under Rosie Napravnik before powering home to a 2 1/2 length victory.  Running time for the 1 1/16 miles was 1:43.11.

The win marked Majestic River’s fifth in eight career starts and ran her career earnings to more than $250,000.  She now has a three-for-three ledger at Monmouth Park.

After scratches, a race that figured to have plenty of front-end speed boiled down to two major pace players: 3-2 favorite Natalie Victoria and Majestic River.

“When the speed inside scratched we told (jockey) Rosie (Napravnik) we’d have one horse to track (Natalie Victoria),” said Anthony Sciametta, assistant to trainer Todd Pletcher.

That’s exactly how the race played out, with Natalie Victoria guiding the field through a half-mile in 47 3/5 seconds and Majestic River glued to her flank.

And go she did.

“The race played out perfect,” said Napravnik.  “I got a great setup and she ran awesome.”

The same could not be said of the favorite.  A former $12,500 claimer that trainer Michelle Nevin had developed into a stake winner, Natalie Victoria weakened after setting the early pace and was eased late.

Montana Native, the Winter Melody winner who ran second in the Grade 3 Obeah, grabbed second.  Longshot Lucky Rag Doll was along late for the show spot.