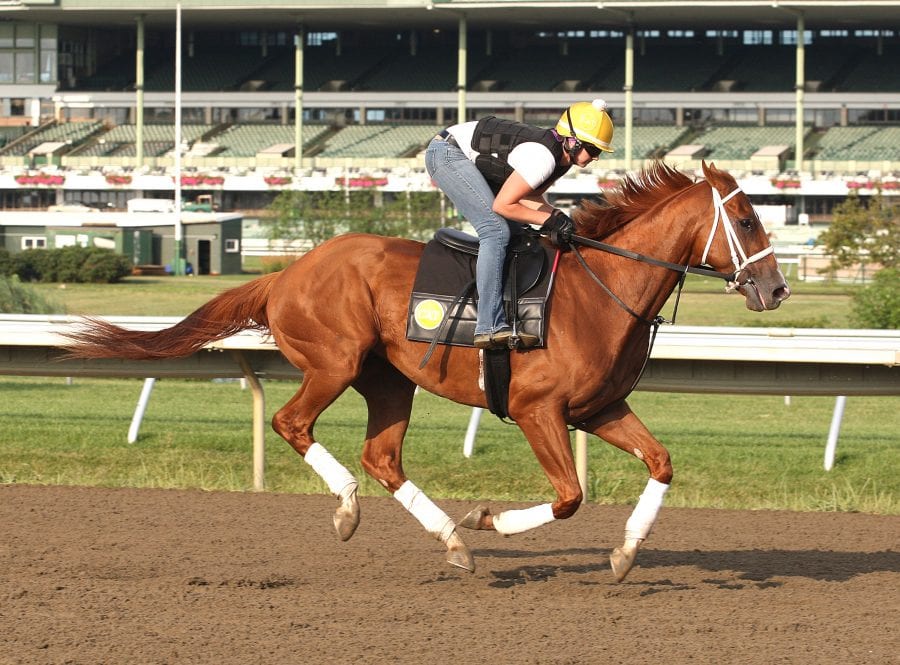 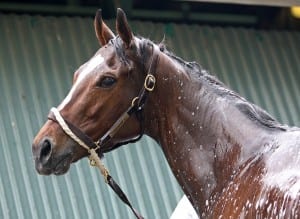 Untapable is ready to go. But she’s not alone… Photo By Bill Denver/EQUI-PHOTO

There are a lot of ways to handicap this afternoon’s Haskell Invitational.

You can, for example, use Beyer speed figs (or someone else’s figs, for that matter), which suggest that the filly Untapable may also be unbeatable; she has three triple-digit Beyers in her eight race career.  None of her eight rivals has more than one.

You can look at the pace, which figures to be zippy, and surmise that might give an edge to horses running late.  Horses like Just Call Kenny and Medal Count, for example.

You can base it on looks, or names, or numbers, too.

Here’s one thing you can’t do, though: depend on the connections to give you much info.

For when it comes to race readiness, horse trainers (and owners) take very seriously the guidance provided by Crash Davis in the movie Bull Durham.  “You’re gonna have to learn your clichés,” he counseled a young pitcher. “They’re your friends.”

And in horse racing, knowing your cliches means never having to say, “No comment.”

And so, said trainer Kelly Breen said of his colt Encryption after his morning exercise, “Everything’s good.”  If we ignore that he’s the longest shot on the board, breaking from the rail, and still eligible for a never-won-two, that may well be the case.

Even those you’d think would be full of questions are, instead, replete with answers.  Take Bayern; the speedy son of Offlee Wild has done his best running at shorter distances, and his two tries beyond a mile don’t offer much to love going nine furlongs.

Jim Barnes, trainer Bob Baffert’s assistant, betrays no concern, however.  “It looks like we may get some rain tomorrow but I don’t think that will bother him at all,” he said.  “We’re looking forward to the race.”

In fact, it turns out the horses themselves are getting into the spirit of things.

“He’s ready,” said trainer Larry Jones of his charge Albano. “He’s got his head out (of the stall) looking for the van.”

Albano, an improving son of Istan, was the easiest kind of winner over the strip in the Grade 3 Pegasus and figures a major player in here.  Still, it’s impressive that the horse himself is planning days in advance.

Just as Crash Davis was happy to be here, hoped to help the ballclub, and took it one day at a time, racehorses feel great, love the track, and are in a great frame of mind — at least, according to their connections.

“He looks great,” opined Medal Count’s trainer, Dale Romans.  “The last two days he’s been bouncing around the track like he loves the place.” 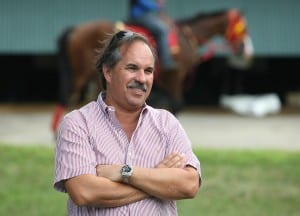 Ron Santos, owner of Social Inclusion, said his horse, who’ll run without Lasix after using the medication in his previous four starts, is “healthy and full of energy… relaxed and better than ever.”

And Pat McBurney said his charge, Just Call Kenny, is “feeling very happy with himself.”

Still, if you listen closely enough, a note of truth occasionally seeps in.

Sure, trainer Jose Garoffalo’s Wildcat Red is “very happy, very good,” the trainer said.  And of course, “He likes the track, he likes the paddock.”  All systems are go.

And then he added, wryly, “The only thing we have left to do is to run the race.”

There is that minor thing left to do, and it’s a safe bet that the Haskell outcome will leave some connections scrambling for their post-race cliches.  Fortunately, they are as plentiful, and as user-friendly, as the pre-race variety.