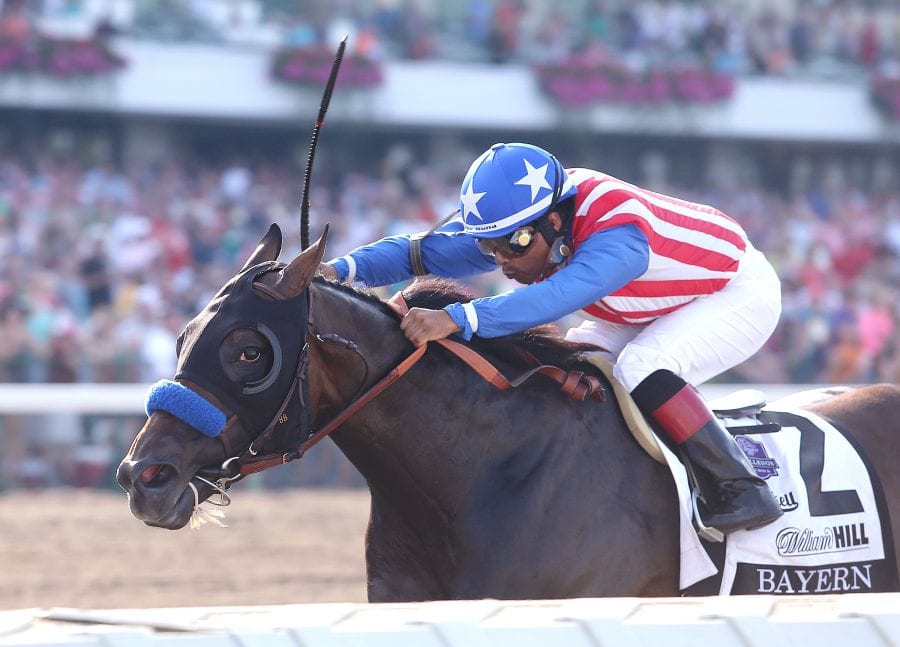 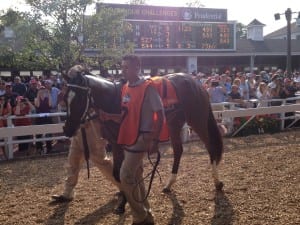 Untapable was the star of the show before the Haskell. Photo by The Racing Biz.

The pre-race story was a simple one: indomitable filly Untapable takes on the boys in the Grade 1, $1,000,000 Haskell Invitational.

A win would etch her name in racing’s record books, alongside the only two other fillies to win Monmouth’s biggest race, Hall of Famer Serena’s Song and sure-to-be Hall of Famer Rachel Alexandra.

The post-race story, however, was entirely different.

Bayern, a colt who’d done his best running at shorter distances, showed the field the way from pillar to post, controlling the pace throughout and scampering away to an eye-catching 7 1/4 length victory in the race, contested before more than 35,000 fans on a hot day at Monmouth.

It was trainer Bob Baffert’s seventh victory in Monmouth’s richest race, which has now been run 47 times.  No other trainer has posted more than three Haskell wins.

For Untapable, meanwhile, the race was a rough one from the get-go.  Sent off at 7-5, she broke inward and bumped with Social Inclusion leaving the gate, then found herself wide throughout and had no answers in the lane.

“The horse next to us (Social Inclusion) acted up in the gate a little bit, so she got a little fussy and she didn’t get away well,” said her rider, Rosie Napravnik.  “We had the widest of everybody’s trip.”

The filly’s trainer, Steve Asmussen, agreed.  “She didn’t get away well at all and was never in position to win the race,” he observed.

Of course, as it turned out, no one, other than Bayern, was.

“Obviously, we were going to the lead,” said Bayern’s rider, Martin Garcia.  “There was no Plan B.”

Baffert, who did not attend the race, echoed that sentiment.  “WIth this horse, there’s no Plan B,” he said.  “We knew the break was very important.”

It was, and Bayern broke sharply to the lead, which he controlled throughout.

Wildcat Red, who stumbled badly leaving the gate, recovered to press Bayern, drawing within a half-length after three quarters of a mile in 1:11.16.  “I got into position and he was coming very nice,” said Wildcat Red’s jock, Luis Saez.  “But at the half mile when I saw the other horse coming, I tried to kick a little bit.”

The “other horse,” Larry Jones trainee Albano, rallied inside to get the place, without ever threatening Bayern.

“The winner was so impressive,” Jones said.  “We could have gone around 25 more times and we still weren’t going to get him.”

Just Call Kenny, the locally connected horse trained by at Monmouth Pat McBurney, received some sentimental support from the Monmouth crowd.  But he was never much involved in the race and finished sixth.

Bayern, a son of Pennsylvania-based stallion Offlee Wild, had heretofore done his best racing at shorter distances.  His lone graded win to date was a sharp score in the Grade 2 Woody Stephens on Belmont day; that race is a 7-furlong affair.

“It’s so exciting,” Baffert said.  “I was hoping he’d be able to get a mile and an eighth.” 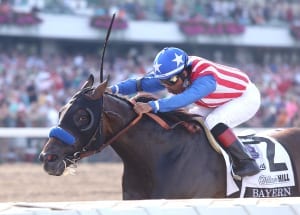 He hadn’t previously, emptying out to be third in the Grade 1 Arkansas Derby at the distance and then running up the track in the 1 3/16 mile Grade 1 Preakness.

For one thing, Garcia pointed out, he was able to dole out the fractions on his own terms.

For another, Baffert said, “We tried to slow him down in the past but now we know we just have to utilize his speed.”

And then there’s the maturity factor.  “He’s slowly maturing,” Baffert said of the May foal.  “The older he gets, the better he gets.”

Bayern’s impressive score opens up options for Baffert, owner Kaleem Shah, and their horse.  Previously, he’d been pointed to the Grade 1 King’s Bishop at Saratoga.  He would be a strong favorite in that race, which is contested at 7 furlongs.

But, Baffert said, “I don’t think I’ll back him up after this.”

If not, the next logical spot would be the Grade 1 Travers, at 1 1/4 miles, on the same day as the King’s Bishop.

And then, of course, there’s the Grade 1 Breeders’ Cup Classic, a race for which Bayern has now automatically qualified following today’s win.

Bayern has now won four of seven career starts, and the winner’s share pushed his earnings to more than $1 million.